Looking on the Bright Side from the Munich Satellite Navigation Summit - Inside GNSS - Global Navigation Satellite Systems Engineering, Policy, and Design 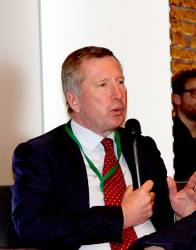 The opening plenary of the annual Satellite Navigation Summit in Munich tends to be a ritzy affair, taking place in the evening in an amazing converted chapel and featuring live musical interludes in between groups of speakers. This year the audience was treated to movie tunes, and the European Commission’s Pierre Delsaux had a suggestion for the play list.

The opening plenary of the annual Satellite Navigation Summit in Munich tends to be a ritzy affair, taking place in the evening in an amazing converted chapel and featuring live musical interludes in between groups of speakers. This year the audience was treated to movie tunes, and the European Commission’s Pierre Delsaux had a suggestion for the play list.

But first, Delsaux, who is Deputy Director General of the Commission’s DG GROWTH, started by talking about the great 2016. In this past year, we saw the launch of the new European Union Space Strategy championed by Commissioner Elzbieta Bienkowska, the launch of four new Galileo satellites on board a single Ariane 5 launcher — “all in the correct orbits” — and the successful declaration of initial Galileo services. “So far, we have been extremely surprised by the quality of the services provided by Galileo,” he said, “even better than we foresaw.”

And he went on to predict an equally great 2017, saying, in his energetic and persuasive style, “If we have a space strategy that is not being implemented, it’s just words. And what we need in Europe are not words; we need actions.”

But when the evening’s presenter, Claus Kruesken, a media personality recognizable to local Bavarians, asked him about the implications of the failure of Galileo on-board clocks, Delsaux positively scolded, although it wasn’t absolutely clear who he was scolding: “In Europe we focus too much on problems!”

No doubt he was referring to numerous stories in the press that had jumped on the failed clock story with a vengeance last January. Later, over drinks, a very small group of media members looked at each other and asked, “Was he talking about us?”

Delsaux raised his voice, citing his experience on a recent visit to Japan, where, he said, everyone was raving about the country’s new satellite navigation system. “In other parts of the world people focus on what’s going right,” he railed. “Here in Europe, why can’t we look on the bright side? Why don’t you have the band playing ‘Always look on the bright side of life?’ ”

Laughter and rousing applause from the audience followed.

While there may or may not be a tendency among naysayers to jump on Europe’s case at the slightest sign of a hiccup, and hiccups there have been, ESA Director General Johann-Dietrich Woerner, speaking after Delsaux, seemed to want to defend telling the plain truth.

“It’s part of our transparency that we are mentioning this, also to the public, that there are some issues,” Woerner said, “without giving any secrets about internal things of the clocks. So, it’s just what is necessary to inform, because it’s taxpayers’ money, so we have to inform. But the system is working. There is not one satellite out of function because of a clock issue.” It was Woerner who informed the public of the clock failure, setting off the fire storm in January.

At the reception that followed the plenary session, in the sumptuous Kaisersaal of the Munich Residence, one interested commentator wondered how many blips and glitches went unreported during the development of GPS. “But that was all a big secret,” someone unnamed responded. “GPS was developed under wraps, as a military project, so there was no reporting, no finger-pointing when something went wrong.”

Galileo, as everyone knows, is a civilian project. Indeed, the civil nature of Galileo was a selling point from the program’s inception. So, secrecy, or even polite discretion, for example when it comes to a technical failure, would not now seem wholly appropriate. And no one can control the press, right? So, like it or not, the naysayers will go on saying nay. And, we fully expect, Galileo will keep on trying to get it right, in full view.

Some have gone so far as to call Galileo a symbol, an embodiment of European innovation, unity, identity. GPS never had to stand that tall, and, equally, was never so vulnerable in the face of increasing public skepticism and scrutiny.

Another of Galileo’s original selling points was that it would help to further European autonomy, on the ground as in space, making Europe independent vis-a-vis the United States and Russian positioning systems. Just how far to take the principle of European autonomy was another topic of off-the-record murmurings over Bavarian drinks and nibbles.

When he initially revealed the clock failures to reporters back in January, Woerner specifically mentioned the political nature of the decision to use new European clocks, instead of other tried-and-tested, non-European, clocks.

The problem with the clocks, according to new unnamed sources, may be far from resolved or even fully understood, which could mean there is a real risk of further and significant delays in the Galileo launch schedule.

But the Europeans may be reluctant, because of the political constraints mentioned above, to turn to outside experts, of which there are a number in the United States for example, who could potentially help to resolve the Galileo clock issue, possibly without even looking “inside”. At what cost autonomy?

It is also quite possible that Galileo will simply choose to go on with its current launch schedule, risking further clock failures but trusting in the policy of redundancy, with four clocks on each satellite where only one is needed. And then why not just add another two clocks, or four, making eight in total per satellite? They aren’t that big and heavy, after all. Either way, the public and reporters will expect to be told which option the program chooses, lest they be jolted awake by another surprise failure.

GPS Trumped?
Kruesken wanted to know if the new U.S. President’s plans to increase defense spending would benefit GPS. The mention of the president’s name elicited some huffing and tittering from the audience, but Harold “Stormy” Martin, Director of the National Coordination Office for Space-Based Positioning, Navigation and Timing, answered in a straightforward and dignified manner, essentially saying we don’t yet have the president’s new budget.

Asked about the potential implications of the president’s “America First” stance, Martin said, “As of right now, we haven’t received any changes in policy with respect to GPS from the new administration, so all of the normal policy stuff… those policies are still in function right now. Of course, we don’t know what the new administration might decide to do, but certainly right now we still are committed to the policy of providing GPS continuously, worldwide, free of direct fees, 365/24/7, day or night, rain or shine.”

What’s up with that?
The mood on the old continent, it’s probably accurate to say, is not so unlike the mood in the United States. We have all seen new and surprising political developments, to the delight of some and the chagrin of others. There is awkwardness over dinner tables and consternation, and there are potentially more shocks to come, with new polls now imminent across Europe.

About “the other thing that happened”, Woerner said, “This Brexit is something I don’t like, but we have enough tools to overcome this issue. We have Norway and Switzerland being members of ESA [but not EU members]. But there is of course some fear in Europe, which I understand, that if one makes too generous options for the U.K. then others [“exits”] will follow.

“We can tackle this problem, we can solve it. And we should not start to switch off the satellites over the U.K. That would really be stupid,” he added, which led to laughter.

Also, asked by Kreusken specifically about the implications of Brexit for the Galileo program, Delsaux answered, “You really do want to look at the dark side of things.”

On a more serious note, Delsaux believes Brexit to be a difficult process with many issues at play. “I have no idea, and I don’t believe anyone has one at this stage, but one thing I can tell you for sure, and again looking at the bright side, even after Brexit, Galileo will exist and will deliver its services on a worldwide basis with a great accuracy in 2020,” he said.

In reference to the U.K.’s participation in the EU-funded research framework Horizon 2020, Delsaux expressed a similar perspective: “Whatever will be the result, I’m sure that between reasonable people a reasonable solution will be found.”

Hansjoerg Dittus, DLR executive board member for space research and technology, also argued for calm, citing the long history of scientists and researchers finding ways to work together, across all kinds of political barriers. So much for the Brexit disaster, for now.

Potentially the most complicated Brexit-related matter, at least for the GNSS community, could be the untangling of the U.K.’s role in the Galileo Public Regulated Service and other Galileo security arrangements, under the responsibility of the GSA, if it comes to that. GSA Executive Director Carlo des Dorides said, “Yes, certainly the U.K. is a major player in the PRS area, but also, as you may know, we have a center in the U.K. specifically devoted to backing up the main security monitoring center in Paris, so certainly the GSA is one stakeholder that is highly interested in the outcome of the [Brexit] decision.”
decision.”