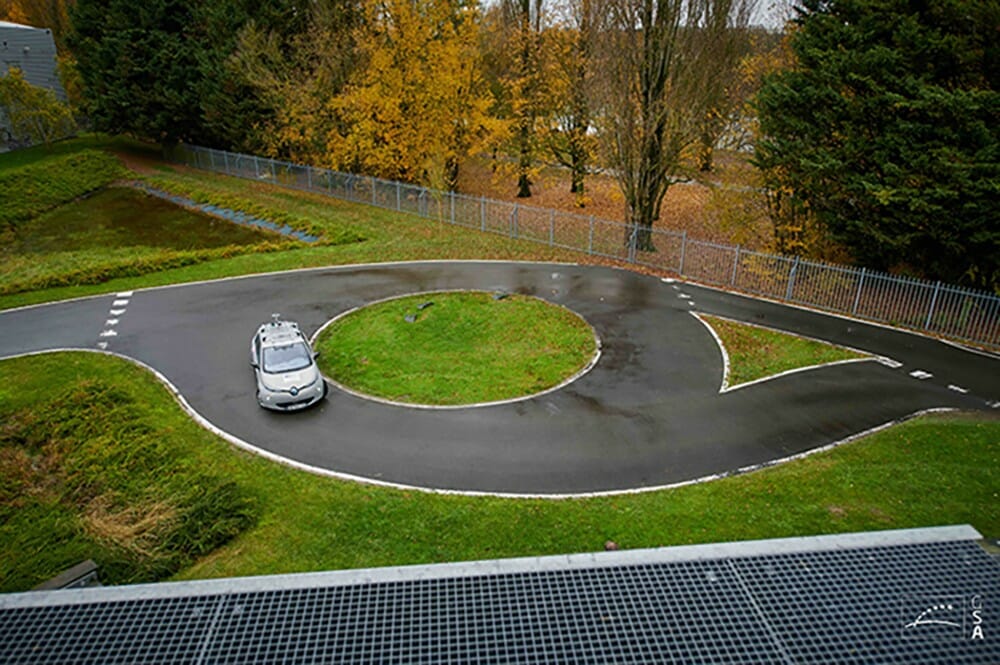 An innovative positioning engine based on a safety-oriented paradigm uses a dual-frequency GNSS receiver, automotive cameras, accurate maps, low-cost inertial sensors and vehicle odometry. The real-time integrity layer bounds the error of each estimated value with a confidence level for safe navigation.

Further public tests of the ESCAPE project were conducted on November 27, 2019 at UTC Compiègne. A Renault ZOE electric car was autonomously driven on tracks and on public roads. During the first demo on a Renault ZOE electric car, participants and journalists had a unique opportunity to get onboard the vehicle and take a driverless ride on the UTC track. In the second demo, a vehicle was driven on a public road in Compiègne to demonstrate the potential of the system in a peri-urban environment. There were no passengers in this car, but the participants were able to watch a live video of the test broadcast via 4G with the estimated position obtained using the EGE along with RTK.

A robust hybrid GNSS (GPS + Galileo) standard positioning algorithm enabled the system to perform consistency checks in parallel for safety. The algorithm improves the accuracy by integrating data from several of vehicle sensors. Automotive intelligent cameras provide lateral distance measurements to road-lane markings, combined with data showing position computed relative to lane-level accurate maps. It is also able to provide an accurate position relative to the map. This makes possible the estimation of the associated integrity Protection Levels (PLs), computed for multiple-target integrity risks. Implementation of the integrity layer is crucial since in safety-critical applications it can be more important to know whether the information is reliable than the precise information itself. This integrity layer determines the degree of usability of the location and orientation estimations, which is used as part of autonomous vehicle architecture to ensure that the vehicle operates safely.

The engine described here was developed and tested on an autonomous car within the European Safety Critical Applications Positioning Engine (ESCAPE) project, co-funded under the Fundamental Elements program of the European GNSS Agency (GSA) for use in safety-0critical applications like autonomous driving (AD) and advanced driving assistance systems (ADAS). The project is led by the Spanish company FICOSA in collaboration with partners from across Europe: Renault, IFSSTAR and the University of Technology of Compiègne (UTC) from France, STMicroelectronics and LINKS Foundation from Italy and GMV from Spain.

Among other innovations, ESCAPE test potential use of the Galileo satellite navigation system’s signal authentication feature and the provision of an integrity layer to assess the degree of trust one can associate with the position information provided by the device.

The ESCAPE GNSS Engine (EGE) is close to market release. Its components are organized in a modular architecture, with safety as its core specification. The design is based on ISO 26262 recommendations in “Road vehicles – Functional safety,” an international standard for functional safety of electrical and/or electronic systems in production automobiles defined by the International Organization for Standardization in 2011.

The EGE was integrated in the UTC-Renault autonomous car and tests took place in July 2019 at the University of Technology of Compiègne (UTC). The autonomous car employed in the tests also had a high-grade trajectory reference system (GNSS+high-grade IMU) which post-processed cm-error solution has been employed as the truth reference trajectory when assessing EGE performances.The tests were performed following a route in Compiègne covering three different environments:

When assessing the obtained results it shall be taken into account that the EGE was tested with the GNSS receiver tracking L1/E1 and L5/E5a bands so only a maximum of 7-9 dual-frequency (DF) SVs were in view:

It should also shall be taken into account that camera measurements (lane-marks) were usually available in open-sky roads but not available in roundabouts and non- uniformly available in sub-urban and urban streets.

An article in the January/February issue of Inside GNSS will feature figures and tables showing the results obtained with the EGE in each environment running the PPP and enhancing the computed solution with the camera measurements and the vehicle sensors.

The results show how, in open-sky conditions, the along and cross errors are below 1 m, which is a very good result taking into account there are only 6-9 dual-frequency SVs in view and that no camera measurements were available at some parts of the route, for example while driving around the roundabouts. In sub-urban, the lower amount of camera measurements increases the cross/lateral errors, while in urban, besides having fewer camera measurements, the limited number of satellites in view due to the buildings increases the error in both dimensions. Nevertheless, sub-urban errors are close to 1 m and almost all urban errors are below 2 m, which are excellent results.