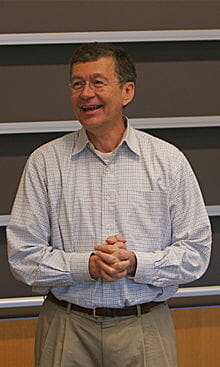 [Updated July 1, 2015] Even as government researchers weather another delay in a study aimed at preventing GPS disruptions, the company at the heart of the issue has launched its own test of what it deems to be economically significant GPS receivers.

[Updated July 1, 2015] Even as government researchers weather another delay in a study aimed at preventing GPS disruptions, the company at the heart of the issue has launched its own test of what it deems to be economically significant GPS receivers.

“We’re getting underway now,” said Reed Hundt, a former chairman of the Federal Communications Commission (FCC) from 1993 to 1997 and now an attorney representing LightSquared.

The firm’s project was put on hold in 2012 by the FCC after tests conducted under the auspices of LightSquared and the GPS Industry Council showed that the proposed system’s powerful signals would overload the vast majority of GPS receivers. LightSquared filed bankruptcy as a result, although it now is poised to emerge from Chapter 11.

The company filed a request with the FCC on June 1 to reassign its spectrum licenses to a new licensee that would be wholly owned by a company called New LightSquared. The reassignment is an essential step in emerging from bankruptcy. Hundt has been named to the board of the new company.

Emerging from the fracas around LightSquared’s initial proposal was a decision by the Department of Transportation (DoT) to conduct a study delineating how much power could be emitted safely by users in the RF bands adjacent to those used by GNSS systems. The Adjacent-Band Compatibility (ABC) Assessment will test a wide range of receivers to determine a mask, that is, a listing of the power levels by frequency that can be emitted by a user in the adjacent bands without disrupting current and future satnav receivers.

The assessment, however, is hung up yet again. Put off initially for lack of funding and then delayed by the government shutdown, the study organizers early last month delayed a workshop originally planned for June 19, noting that the test plan, one of the planned subjects for the meeting, had yet to be released.

“DOT continues to consider all of the helpful input that it is receiving from stakeholders,” the department said in a statement, “and expects to release the draft of a test plan in the near future for further comment by interested parties.”

LightSquared, however, is not waiting. In a June 24 filing with the FCC, the company revealed that it had hired Roberson and Associates, a Schaumberg, Illinois–based technology and management consulting firm with a solid background in wireless communications and spectrum, to develop an interference study.

Included in a presentation attached to the FCC filing was a list of 28 different GPS receivers and related devices, including certified and non-certified aviation receivers and avionics equipment, general location, cell phones and 13 different high precision clocks and receivers.

“The presentation provides an initial perspective on testing of the compatibility of terrestrial broadband and GPS,” LightSquared’s lawyers said in an accompanying letter to the FCC.

The 28 receivers on the list in the test plan were chosen for their economic significance, explained Hundt.

“We think that the right thing to do is test receivers that appear to have, let’s call it, economic significance. So, that’s why you’re looking at a list,” Hundt said. “If somebody thinks that others are the ones with economic significance, then confidentially share the business information — and speak now or forever hold your peace.”

Hundt said LightSquared wants to work with navigation companies Trimble, Garmin, and John Deere “to see if we can find a business and technical solution that helps their businesses and lets us get going in our business.”

The key to that, he said, is to “have a great engineering firm analyze how the GPS companies might be able to have receivers that help them keep their eyes and ears on the GPS satellites and at the same time enable spectrum licensed to LightSquared to be used for wireless broadband.”

Hundt said he presented a copy of the plan to Karen Van Dyke of the Department of Transportation, who leads the ABC Assessment, and to others at DoT, inviting their questions.

“We didn’t want there to be any secrets,” he told Inside GNSS. “We want his study, this testing to be in a fishbowl — and everybody can look at it.”

Hundt said he asked DoT to encourage the three companies to submit to Roberson, on a confidential basis, business and technical information for the study.

Speak Up Now or Else
The firm also met with the FCC on June 24, asking for assistance with getting such information and resolving issues with the three firms including pending litigation.

“It really boils down to two things,” said Hundt. “The first thing is speak now or forever hold your peace. . . . If there are devices that you think have economic importance and should be studied, then identify them to Dennis [Roberson]. If there’s technical information that you think speaks to the performance of these devices then, in confidence, give it to Dennis. But don’t think that it’s fair, or serves the cause of justice, to keep the information to yourself and then months later come in and criticize this report. Speak now or forever hold your peace.”

Point number two, he said, is that truth helps.

“If we all talk about the facts,” he said, ”we’ll get to a business and technical compromise that will makes everybody better off. That’s what I always observed when I was FCC chairman and I am positive that that could be true here.”

Hundt said they should have a plan for going forward in less than 90 days.

According to a description of the testing filed with the FCC, LightSquared proposes to assess the impact of different levels of power on a key performance indicator or KPI as compared to the DoT’s accepted metric of a change in the noise floor. An example of such a KPI, according to the presentation, is two-dimensional position error.

LightSquared has asserted, experts previously explained to Inside GNSS, that current safety margins are too conservative, and that the real-world impact of its signal is not that great. In the presentation the firm asserts that “a 1 dB rise in noise power may produce an imperceptible increase in GPS position error or other KPI.”

This is similar to an approach advocated in a “minority report” submitted to the Federal Aviation Administration (FAA) earlier this year as the FAA worked through its assignment for the ABC Assessment. LightSquared asserted then that measuring a change in a KPI, like position error, was preferable over changes in the noise floor.

The FAA, however, does not use actual position error by itself as its key metric, said Chris Hegarty, co-chairman of RTCA Special Committee 159, which develops GPS-related standards for the FAA.

“The GPS Innovation Alliance (GPSIA) supports a consensus-driven process, including all government and non-government stakeholders, to clearly identify and address remaining technical issues raised by LightSquared proposals to repurpose mobile satellite spectrum for terrestrial broadband use," the alliance statement said.

"The technical challenges posed by these proposals are formidable, as evidenced by the conclusions of multiple U.S. government entities. Specifically, the U.S. Departments of Defense and Transportation and the NTIA have all found in the last several years that LightSquared’s proposals have significant potential to interfere with GPS. Contrary to LightSquared’s recent suggestions, this is not simply a private matter between three GPS companies and LightSquared, but is important to all GPS users who rely on this critical technology every day. The Department of Transportation has sponsored an ongoing effort to assess adjacent band issues, and the GPS industry is actively engaged with the FCC, DOT and other government stakeholders to drive consensus around next steps. While we welcome the participation of LightSquared consultants, any further analysis of the technical issues should be informed by input from all of the relevant stakeholders, rather than the one-off efforts of an interested party.”