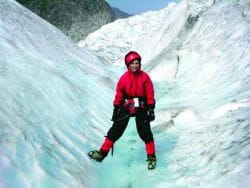 Why doesn’t one of the profession’s leading innovators have GPS in her car? The answer reveals just how recently GPS has come into its own. “When I bought my car in 2001, adding a navigation system wasn’t an option,” she explains. “I’d gladly have paid extra for it.”

Since then, GPS has vaulted the divide between geek speak and consumer chic. “Legislation has brought it into our cell phones. The world’s banks rely on it to time stamp their transactions,” says Van Dyke. “Eventually, coordinates will be part of every product and process in our lives – but first GPS must be improved and integrated with other technologies in order to achieve accurate positioning, navigation, and timing (PNT) information anytime and anywhere.”

That challenge keeps Van Dyke on her toes in her work for the U.S. Department of Transportation (DOT). Her specialty: incorporating GPS into the transportation infrastructure for various applications.

Little did she know, when she accepted a summer research job following her graduation from the University of Lowell in 1988, that she was sealing her professional fate. Her professor, Dr. James Rome, was doing a project for the John A. Volpe Transportation Systems Center looking at whether a new system, GPS, might reduce aircraft separation on the North Atlantic routes by providing position information where there was no radar coverage.

“That summer gave me an opportunity to learn about GPS, which I found to be a fascinating technology with tremendous future applications,” Van Dyke says. By summer’s end, she was hired by Volpe, part of the DOT Research and Innovative Technology Administration (RITA).

She says her engineering mentor, Frank Tung, modeled a well-rounded approach toward the profession. Tung was director of aviation programs when she joined Volpe and has since retired. “He always emphasized enjoying what you work on and ensuring that your work contributed to making a positive difference for the organization and transportation community,” she says.

For Van Dyke, one of the most enjoyable aspects of her work is its global nature.

“Many countries have approached the Volpe Center for assistance with development of similar satellite outage reporting systems for air navigation – especially third world countries that do not have the sophisticated ground-based infrastructure that the U.S. has,” she says. “The cost-effective and innovative benefits that GNSS technology can provide to them are tremendous.”

She has helped spearhead many innovations – including these personal favorites:

“Subsequently, similar work was performed for Australian, German, and Chilean aviation authorities on the implementation of systems for use by pilots and air traffic control in those countries,” she says.

Prior to commissioning the GPS Wide Area Augmentation System (WAAS) in 2003, she led a team that supported the FAA in development of the WAAS prediction model and integration into the air traffic control system to supply Notice to Airmen (NOTAM) information for all phases of flight, including precision approaches.

In 2001, she participated in a Volpe Center project that produced sixteen recommendations for reducing the vulnerability of the transportation infrastructure that relies on GPS. The project was done in response to the President’s Commission on Critical Infrastructure Protection.

The team’s study of GPS civilian aviation, maritime, and surface uses assessed the effects of GPS outages and recommended steps to minimize the safety and operational impacts of both short and long term disruptions.

Van Dyke headed the Volpe Center team that developed the prototype traceability requirements tool for the GPS Joint Program Office. That led to the creation of an internal website whose acronym is GPS STARWEB, or GPS Specifications Traceability and Analysis of Requirements. STARWEB uses DOORS software – Dynamic Object Oriented Requirements — for its integrated database that establishes relationships and traceability of requirements within the GPS system.

“This equips the civil GPS community with the information necessary for informed decision making,” she says.

Currently, Van Dyke has several projects going at once. Recently, she has been supporting development of GPS III, evaluating the specifications for the future space and control segment.

She’s also working with the Federal Railroad Administration and Ohio University on the High Performance Nationwide Differential GPS initiative to evaluate whether it can be designed to meet requirements for Positive Train Control and other high accuracy applications.

Another collaboration addresses the potential use of WAAS for maritime applications. She heads a Volpe Center team that is working with Innovative Solutions International (ISI) to develop a GNSS Performance Monitoring System (GPMS) for the Brazil Aviation Authority. This system is responsible for ensuring that satellite-based systems provide a continuous, safe, and reliable signal-in-space (SIS) for navigation users.

And, with all that, she still finds time to volunteer. She has been the air navigation technical representative for the Institute of Navigation (ION) since 1992 and served as ION’s eastern region representative and president (2000-2001).

Lisa Beaty, ION’s director of operations, says “Karen’s international technical reputation precedes her, but many people may not know about her countless hours of volunteer service within the navigation community, including fostering the development of programs for the next generation of navigation professionals.”

Favorite Equation
The Keplerian parameters describing orbital motion. Most of the applications we have developed for GPS prediction systems and the analysis begins with modeling the GPS constellation performance based on Keplerian motion, Van Dyke points out.

First Significant GNSS Achievement
Back when there wasn’t a full constellation of satellites, Van Dyke was part of the Volpe Center project team that helped develop Receiver Autonomous Integrity Monitoring (RAIM) algorithms to predict the availability of GPS integrity for oceanic through non-precision approach phases of flight. The limitation was availability of service, which then led to development of the augmentation systems.

Her Compass Points
Engineer husband Ken Kepchar is, “one of those people who was born with a built-in navigation sensor.” They met at the GPS Joint Program Office at the Los Angeles Air Force Base.

Rather than follow the herd into high tech computer firms when she finished engineering school, Van Dyke’s fascination with early GPS technology led her to take a position with the John A. Volpe Transportation Systems Center.

The University of Lowell (Massachusetts) where she earned her bachelor’s and master’s degrees in electrical engineering (1988 and 1991).

Knew GNSS had Arrived When . . .
“When I first began working on GPS, my friends and family had never heard of it. I would have to explain what the acronym GPS stood for, what the system was, and the various applications of the technology. Over time, my friends and family began telling me about GPS applications they had read about in the paper or seen on the news. Now that the term GPS is commonly used in the media – it has arrived!

Popular Notion about GNSS That Most Annoys
“It is disappointing when I hear someone in the international community say that the U.S. Department of Defense can turn off GPS anytime they want. It is simply not true. The U.S. government has worked very hard to establish national space-based positioning, navigation, and timing (PNT) policy with a coordination office, headed by a civilian, with civil and military representation. The national space-based PNT Executive Committee is co-chaired by the Deputy Secretaries of Transportation and Defense.”

Consumer Engineering Wish List
“My own on-board navigation system with voice is number one on my Christmas list.”

What’s Next
Integration of GPS with other navigation sensor technology and development of a net-centric approach for reliable distribution of PNT information.