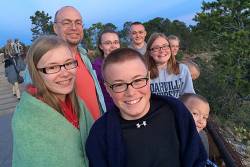 Raquet says this special case of Euler’s formula is interesting because it involves many of the basic concepts of mathematics: an exponential function involving e, the imaginary number i, the value of π, a negative sign, and the value of 1. “And yes,” he adds, “this equation has been on our dining room whiteboard from time to time!”

GNSS event that most signifies that GNSS has ‘arrived’

“About 10 years ago,” says Raquet, “I was checking out at Wal-Mart, and the Wal-Mart cashier started explaining to me some of the details of how GPS works, including how GPS sends a data stream to the receiver so it can calculate satellite positions. He had no idea that I knew anything about GPS and was just making small talk. At that point, I knew that GNSS had arrived.”

Raquet says he’s annoyed by the popular notion that if you have a GPS receiver, then the Air Force can track you. “I used to give an annual lecture on GPS to a group of high school students. At the beginning of this lecture, I would ask them whether or not the government can track them if they have a GPS receiver on, and usually about two thirds would say that it can. I would then attempt to explain that a GPS receiver is only a receiver, and that there is no way for the GPS system to know anything about who is using the system or where they are. After this long explanation, about half of the students still thought that the government was tracking you if you had a GPS receiver!”

Raquet says he’d love to see a GNSS-controlled Frisbee that he could throw and that would always come right back to him. “I think that knowing where the Frisbee is, using GNSS, is the easy part of this problem,” he says. “The bigger challenge is figuring out how to automatically steer a Frisbee in flight!”

His first mentor was his father, Charles, a NASA engineer who “inspired within me a love for figuring out how things work,” and his second, Raquet’s Ph.D. advisor at the University of Calgary, Dr. Gérard Lachapelle.

Haker, M., and J. Raquet, “Global Navigation Satellite System Signal Decomposition and Parameterization Algorithm,” US Patent no. 9,025,640. Issued May 5, 2015 (A method to break down a GNSS signal into a set of direct and multipath components)

Martin, R., and J. Velotta, and J. Raquet, “Navigation and Position Determination with a Multicarrier Modulation Signal of Opportunity,” US Patent no. 8,072,383, Issued December 6, 2011