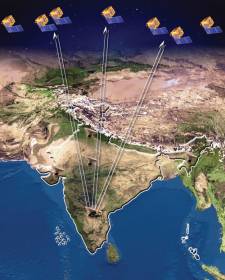 The global wireless communications standards body 3GPP has accepted the interface specifications of NavIC, India’s regional satellite navigation system. With this permission, NaVIC can be integrated into devices like smartphones and tablets. The announcement givea a big boost to India’s mobile telecom industry while also encouraging use of NavIC throughout the Asia-Pacific region.

The Indian Regional Navigation Satellite System (IRNSS), with an operational name of NavIC (acronym for NAVigation with Indian Constellation; also, nāvik, “sailor” or “navigator” in Hindi), consists of a currently operating constellation of eight satellites developed by the Indian Space Research Organization (ISRO). It covers India and a region extending 1,500 km (930 miles) around it, with plans for further extension.

During its Radio Access Network (RAN) meeting held in California in September, 3GPP approved inclusion of NavIC in Rel-16 LTE and Rel-17 5G NR specification. These 3GPP specifications that support NavIC will be available in a few months’ time.

Smart phones and cellular internet-of-things (IoT) devices that use location information will begin to use the NavIC system in contrast to the current usage of the American GPS system. This will bring NavIC technology to mass market for use in 4G, 5G and Internet of Things (IoT).

It also means that Indian companies and startups have an opportunity to design ICs and products based on NavIC. The potential market for these chipsets and products can be large as it can be exported to other countries as well. This will produce significant increase in NavIC usage and the uptake of NavIC enabled services and applications throughout the India.

depend on their own Satellites for navigation applications in their respective regions.”

Kailasavadivoo Sivan, space scientist and chairperson of ISRO, said “We are extremely happy to know about the 3GPP approval of NaVIC is fully operational and is doing a great job. Currently, eight satellites are already in orbit. Seven satellites are being used for navigation purposes and one satellite only for messaging purposes. Some apps based on NaVIC are already functional and being immensely used. Soon, we will bring out more NaVIC apps that will benefit to the common man.”