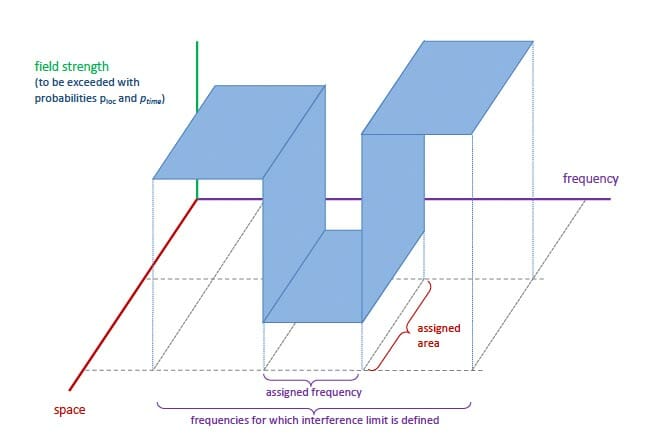 A group of top frequency experts recommended last week that the Federal Communications Commission (FCC) conduct a pilot test of the concept of “harm claim thresholds” (HCTs), an approach that requires receiver manufacturers to build devices capable of withstanding a predetermined level of interference from users in adjacent frequencies.

A group of top frequency experts recommended last week that the Federal Communications Commission (FCC) conduct a pilot test of the concept of “harm claim thresholds” (HCTs), an approach that requires receiver manufacturers to build devices capable of withstanding a predetermined level of interference from users in adjacent frequencies.

The concept was floated earlier this year by a committee of the FCC’s Technical Advisory Council (TAC). In a white paper entitled "Interference Limits Policy: the use of harm claim thresholds to improve the interference tolerance of wireless systems," the Receivers and Spectrum Working Group suggested that the approach would enable the government to wring more utility out of the already crowded frequency spectrum while avoiding the complexities of setting receiver standards.

The working group recommended the pilot test to the full TAC on September 23 and suggested using a multi-stakeholder approach to help work through the challenges.

“The ‘harm claim thresholds’ being discussed within the FCC’s TAC is a general concept that would establish limits on in-band and out-of-band interfering signals from one radio service that must be exceeded before a radio system in another radio service can claim harmful interference,” a representative of the National Telecommunications and Information Administration (NTIA) told Inside GNSS in an email.

The NTIA is part of the U.S. Department of Commerce. It manages the use of the frequency spectrum by federal agencies and advises the White House on policy. The FCC in an independent agency, created and overseen by Congress, that regulates interstate and international communications by radio, television, wire, satellite, and cable.

Although the fight between the GPS community and LightSquared sparked interest in HCTs, the trial run being suggested does not involved frequencies near GPS. The pilot test would be in the 3550—3650 MHz band. NTIA said it would participate in any FCC pilot programs to examine the utility of harm claim thresholds.

“If [the pilot program] is successful in the 3550–3650 MHz band,” the agency told Inside GNSS, “then other bands could be considered by NTIA.”

GPS Alliance Cautions on HCT Adoption
The GPS Innovation Alliance, however, suggested caution on using HCTs — especially in the sort of situations faced by the GPS community.

“Determining the regulatory approach depends on a number of factors, including the nature of the services in the adjacent bands and the types of receivers utilized,” the Alliance said in comments on the white paper.

“Indeed, as the TAC White Paper recognizes, use of harm claim thresholds may not be appropriate, or may be particularly difficult to administer, in some circumstances, such as where the adjacent services are dissimilar, the receivers utilized are ‘decoupled’ and not controlled by the license holder, the service is not under the jurisdiction of the Commission, and safety-of-life systems like aviation and public safety are involved.”

Because a HCT approach has not previously been used, the Alliance asserted “it requires additional analysis regarding how and under what circumstances it should be employed.” Moreover, the commission ‘should consider whether it is appropriate to adopt a Notice of Inquiry (NOI) . . . “to identify circumstances in which harm claim thresholds may not be the best means to resolve co-existence issues.” Furthermore, the FCC should determine as part of an NOI process “how a harm claim threshold should be implemented in particular circumstances.”

GNSS, Telecom Experts Counsel GNSS Community Involvement
The NTIA, however, is in sync with the FCC on spectrum sharing initiatives such as HTCs, and the GPS community would be politically smart to embrace them, suggested Jim Litton of Litton Consulting and Rich Lee of Greenwood Telecommunications Consultants.

The pair, who presented a paper on HCTs at the Institute of Navigation (ION) GNSS+ 2013 conference in Nashville this month, said they expect the president to issue a mandate for spectrum efficiency that anticipates a further mandate on receivers. They inferred that a “policy to harden all (critical infrastructure) GNSS receivers” would emerge and suggested that GPS users could benefit from HCTs — especially if the process could be used to strengthen protections from sources such as intermodulation interference and if a small segment of spectrum at 1545 to 1555 MHz could be peeled off for a terrestrial PNT augmentation service

Litton and Lee presented a potentially “bi-partisan” perspective on the idea. Litton has deep roots in the GPS community. He served as CEO of NavCom Technology (NCT), a firm he and three others founded that was eventually bought by Deere & Co. Lee’s firm served as advisors to LightSquared. The NTIA already supports HCTs as part of a “spectrum re-purposing initiative,” the two asserted in their paper. “We need to develop a unified position on GNSS spectrum requirements,” said Lee.

There are indeed questions that would need to be worked out. It remains unclear, for example, how claims of interference would be handled under an HCT approach or what the enforcement mechanism would be. GPS is integral to the sort of applications where interference for even a few hours could be very detrimental. Litton and Lee suggest that receiver manufacturers could play a role in monitoring interference and protecting users.

It’s not clear if GPS manufacturers would want or could handle that role, but Litton and Lee may be right about the broad support for HCTs.

“(HCT) is certainly something that [the new FCC chairman] Tom Wheeler is likely to be interested in,” said Tim Farrar, a technology and telecommunications consultant with TMF Associates, of Menlo Park, California. “He was chair of the FCC Technical Advisory (Council) before being nominated for FCC chairman. So, this is obviously something that has come up on his watch. And so it seems likely there will be an attempt to push that concept forward once he becomes FCC chairman.”

Wheeler, who confirmation by the U.S. Senate is scheduled in the near future, also comes from a telecommunications background and may be keen on finding more spectrum. He was a principal in a number of telecommunication firms and the chief operating officer of the mobile carrier trade group CTIA from 1992 to 2004.

He also has solid ties to the White House. He led the Obama-Biden Transition Project’s Agency Review Working Group in charge of transitions for the science, technology, space, and arts agencies, according to his biography on the website of Core Capital Partners, where he is managing partner.

“Yes, it will come up” Farrar said. “Will it be applied to LightSquared anytime soon? That will be a more difficult question.”