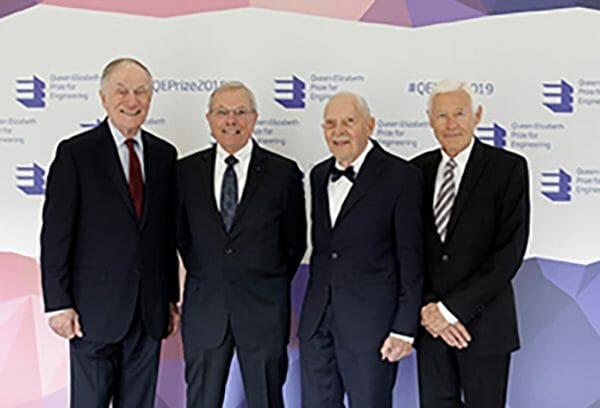 The four engineers responsible for the creation of GPS — the first truly global, satellite-based positioning system — were honored Tuesday night with the Queen Elizabeth Prize for Engineering, an award that comes with a £1 million prize for an engineering innovation with a global impact on humanity.

The winners — Bradford Parkinson, James Spilker Jr., Hugo Fruehauf, and Richard Schwartz — were all present at the London ceremony where Lord Browne of Madingley, chairman of the Queen Elizabeth Prize for Engineering Foundation, made the announcement in the presence of Her Royal Highness Princess Anne.

“It is an awesome honor,” Parkinson told BBC News. “There is no prize for engineering greater than this.”

“The nice part,” Parkinson added, “is that it’s a recognition for technology that is good for humanity around the world. And it’s humbling because, candidly, the four of us represent another score of engineers, and more, who made critical contributions. Nobody does everything.”

With the creation of GPS people had, for the first time free, immediate access to accurate position and timing information, the foundation said in a statement. “Today, an estimated four billion people around the world use GPS, and its applications range from navigation and disaster relief through to climate monitoring systems, banking systems, and the foundation of tomorrow’s transport, agriculture, and industry.

GPS has had a revolutionary impact upon modern society. At just $2 per receiver, GPS provides an accessible service and a powerful tool that people can integrate with their own applications. Simple smartphone apps can track disease outbreaks, self-driving tractors can optimize crop harvests, and sports teams can improve team performance. New applications for GPS continually appear, and its annual economic value has been estimated to be $80 billion for the USA alone.”

Contributions
Bradford Parkinson — Often called the “father of GPS”, Parkinson built upon several separate systems to create the current GPS design. He directed the program and led the development, design, and testing of its key components — insisting that GPS be intuitive and inexpensive, which later made position, navigation and timing (PNT) accessible to billions.

James Spilker, Jr. — Spilker was recruited to design the ranging signal that the satellites broadcast. The signal had to be precise, resistant to jamming and allow multiple satellites to broadcast on the same frequency without interfering with each other. Spilker’s team also developed and built the first receiver to process the GPS satellite signals. His delay-locked loop process, used for tracking code division multiple access (CDMA) signals, is essential to GPS accuracy, the foundation said in its description of the project.

Richard Schwartz — For the GPS program to be affordable, each satellite had to be long-lived. As the program manager at Rockwell during the development of these satellites, Schwartz was tasked with ensuring a three-year life span. His design was resistant to the intense radiation from the upper Van Allen belt and lasted over nine years. Follow-on versions of the GPS satellite have been even more long-lived.

Hugo Freuhauf — Then chief engineer at Rockwell Industries, Freuhauf led the development of the miniaturized, radiation-hardened atomic clock at the heart of each GPS satellite. GPS receivers rely on accurate timing information, broadcast from the satellites, to determine their position on earth. Each satellite uses multiple atomic clocks — accurate to within billionths of a second — to ensure consistent timing. The timing information in the GPS signal is so accurate it is now used to synchronize communications systems, power grids, financial networks, and other critical infrastructure around the world.

Impact
The innovations in receiver technology driven by the private sector once the signal was available surprised Freuhauf. “It blew me away. The world’s tech industry reduced a 40lb, $100K backpack-sized GPS receiver into a fingernail-sized chip receiver that now costs less than $2. Because of that, GPS is everywhere; it is part of the global economic engine and key to global safekeeping. It’s had an almost unimaginable impact on the globe,” he said.

“The global positioning system provides an outstanding example of engineering’s profound impact on society,” said Professor Sir Christopher Snowden, chair of the judging panel. “It epitomizes what the QEPrize stands for; starting with an almost impossible challenge, GPS is now universally accessible and benefits billions of people around the world each day. Over time its varied applications have profoundly transformed how society operates, and its impact will only continue to grow. This is exactly the type of groundbreaking engineering achievement that inspires young people to become tomorrow’s engineers.”

When asked whether the four winners understood that GPS could change the world, Parkinson said they had a vision of world impact when they started the project.

“Without that inspiration,” said Parkinson, “it would have been difficult for us to weather the storms of doing something for the first time. Back in 1978, I made a few drawings that depicted GPS applications that I could personally foresee. They included an automobile navigation system, semi-automatic air traffic control, and wide-area vehicle monitoring, and seem to be rather accurate 41 years later. That said, none of us could fathom the sheer breadth of GPS applications — the many ways that it would become a “System for Humanity.”