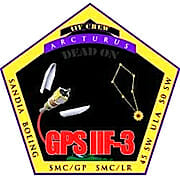 Designated Space Vehicle Number 65 (SVN-65), the spacecraft will assume its position in slot 1 of plane A, replacing SVN-39. The latter satellite will be moved to another auxiliary position of the GPS constellation, according to the U.S. Air Force Space & Missile Systems Center (SMC) at Los Angeles Air Force Base, Calfornia.

SVN-65 is expected to be set healthy for navigation users approximately 90 days after launch to conduct an extended navigation signal test.

"We, of course, are incredibly pleased with the successful outcome of today’s launch,” said Col. Bernie Gruber, director of the SMC’s Global Positioning Systems Directorate. “Thanks to the tireless efforts of the 45th and 50th Space Wings, United Launch Alliance, our industry partners, and the Delta IV and GPS IIF launch teams, this morning’s launch was flawlessly executed. The talented group of individuals carried out the GPS IIF-3 mission with great diligence and professionalism."

For each launch mission, SMC develops a launch patch that represents significant events or details of the launch story. The mission patch for this IIF satellite launch pays tribute to Elmo, with the launch patch depicting the navigation star, Arcturus, as a sunflower, Elmo’s favorite flower.

"Arcturus is the brightest star in the northern celestial hemisphere and the dominant star in the constellation Boötes," said Maj. Linda Gostomski, 19 SOPS flight operations commander. "Prehistoric Polynesian navigators used the star for traveling across the seas and knew Arcturus as the ‘Star of Joy.’"

Outstanding team performance and efficient approaches for enhancing mission capability displayed throughout the launch preparation process earned Elmo and her team the 2010 Chief of Staff Team Excellence Award, according to Gostomski.
Since its inception, GPS has progressed from an idea, to a prototype, into a reality, Gruber pointed out.

"It’s an amazing component of today’s technical capabilities and culture, and shows how important our space systems have become to our defense and to our way of life,” Gruber added. “An incredible number of people around the globe use and depend daily upon GPS and we are proud to serve and provide this service to the nation and our allies.”

The new capabilities of the IIF satellites will provide greater navigational accuracy; a more robust signal for commercial aviation and safety-of-life applications, known as the new third civil signal (L5); and a 12-year design life providing long-term service. Other upgrades improve anti-jam capabilities for the warfighter and improve security for military and civil users around the world.