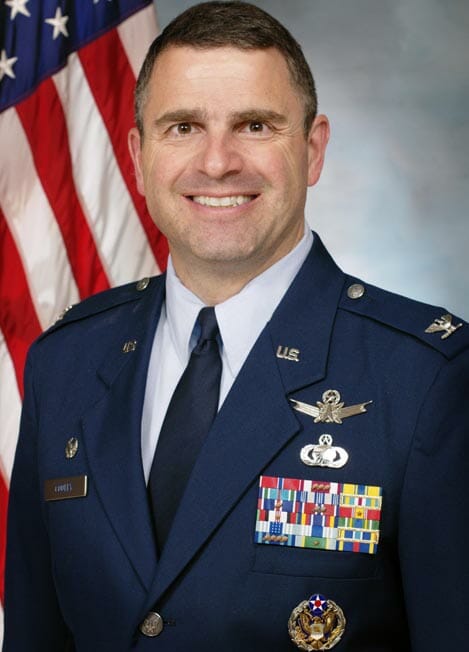 The U.S. Air Force appears to have identified a future leader of the GPS Directorate.

At a time yet to be determined, Col. William T. "Bill" Cooley will take up the role of Senior Materiel Leader at the Department of Defense (DoD) acquisition office for developing and producing GPS satellites, ground systems, and military user equipment.

The U.S. Air Force appears to have identified a future leader of the GPS Directorate.

At a time yet to be determined, Col. William T. "Bill" Cooley will take up the role of Senior Materiel Leader at the Department of Defense (DoD) acquisition office for developing and producing GPS satellites, ground systems, and military user equipment.

Typically, new candidates serve as in senior positions at the directorate for up to six months to familiarize themselves with the responsibilities and tasks of the GPS director and program operations within the Space and Missile Systems Center (SMC) at Los Angeles Air Force Base, California.

The current commander, Col. Bernie Gruber, is coming up on the end of his third year at the GPS Directorate, which has been the usual limit for tours of duty at the head of the program. Gruber took over at the directorate in July 2010.

Cooley currently serves as the director of the Air Force Research Laboratory (AFRL) Space Vehicles Directorate and as the commander of the Phillips Research Site at Kirtland Air Force Base, New Mexico. He received his command there from then-Maj. Gen. Ellen M. Pawlikowski, the outgoing AFRL commander, who received her third star (lieutenant general) when she assumed command of the SMC in June 2011.

Cooley graduated from Rensselaer Polytechnic Institute with a bachelor’s degree in mechanical engineering and later obtained a Ph.D. in engineering physics from the Air Force Institute of Technology, Wright-Patterson AFB, Ohio.

He earned the nation’s ninth highest military award, the Bronze Star Medal, for meritorious service in a combat zone while working as the defense sector program manager, Office of Security Cooperation–Afghanistan, from April to November 2005.

Cooley is probably the first candidate for the post who has not spent time in the GPS program during his military career. The $1 billion annual budget for the GPS program will be a step up for Cooley, who oversees a $378 million budget at Kirtland AFB.

Previous assignments included serving as commander of the 350th Electronic Systems Group, Electronic Systems Center, Hanscom AFB, Massachusetts, and program element monitor for military satellite communications, and Chief of Staff, Directorate of Space Acquisition, Under Secretary of the Air Force, in the Pentagon.

At the GPS Directorate, Cooley’s mission will remain much the same as that facing Gruber: to maintain and synchronize the modernization initiatives in the three GPS segments — space, ground control, and user equipment. While the GPS III satellite program appears to remain on schedule for a 2014 delivery, the next-generation operational control segment (OCX) has slipped behind schedule, and new military GPS user equipment (MGUE) able to use the M-code signals transmitted by GPS III satellites does not appear likely to be fielded in quantity until 2017 or later.

Cooley’s appointment comes at a time of considerable budgetary uncertainty for the military branches. Air Force Secretary Michael B. Donley said Friday (January 11, 2013) that the service’s leaders will provide “guidance” within a few days to begin prudent planning for the uncertain budget environment ahead.

Absent congressional action, automatic across-the-board spending cuts will be implemented beginning March 1, with DoD facing a $500-billion reduction over the next decade mandated under . Even should those large cuts be avoided, DoD will remain under pressure from the deficit-reduction focus in Washington.

Although the effects of any Air Force budget cuts on the GPS program remain undisclosed, perhaps yet undetermined, the space domain and precision capabilities bolstered by GPS seem to remain as priorities for the service.

In remarks at a press briefing on Friday, General Mark Welsh III, Air Force Chief of Staff, said, “We’ve got a pretty good track right now with our fighter, bomber programs, and our space programs.  It’s a good start, but it’s just a start.  We have to figure out how to keep it moving.”

He added, “The space and cyber capabilities we developed . . . need to continue.

In the same press briefing, Donley said, “I think that the mission set of the Air Force and the things that Gen. Welsh referred to, the core functions — and the calling cards, as the chief refers to them as — would stay the same.  We’re going to continue to do global ISR [Intelligence, surveillance, and reconnaissance].  We’re going to continue to do global precision attack — attack, mobility, command and control, special operations.  All these things remain part of the Air Force’s job jar.”