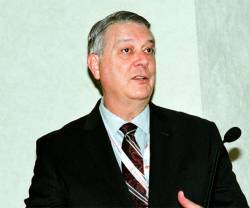 Almost half of the sessions at the International Navigation Conference (INC) 2015 held this week (February 24–26) in Manchester, England, were devoted to the theme of GNSS resilience and vulnerability, a topic that Dana Goward of the Resilient Navigation and Timing Foundation has been trying to drive home for years.

Almost half of the sessions at the International Navigation Conference (INC) 2015 held this week (February 24–26) in Manchester, England, were devoted to the theme of GNSS resilience and vulnerability, a topic that Dana Goward of the Resilient Navigation and Timing Foundation has been trying to drive home for years.

Reporting some movement towards establishing eLORAN as a potential back-up system in the United States — or, at least, a slowing of the dismantling of legacy LORAN systems — Goward can’t have been impressed by what’s (not) happening in Europe. The European Union (EU) continues to say little about the need for back-up systems that don’t fail for the same reasons that GNSS does.

Reinforcing the general sense of helplessness was Todd Humphreys, an assistant professor of aerospace engineering at the University of Texas, who described some very interesting work showing, for anyone who didn’t already know it, how simple and easy it is to spoof air and sea vehicles.

Does the EU Get It?
When asked what they’re doing about GNSS vulnerability, EC and GSA officials generally point to the jamming-resistant qualities of the Galileo PRS. But by all accounts only a small proportion of Galileo users will have access to the PRS, while a wide-scale GNSS outage, either natural or man-made and affecting both GPS and Galileo satellites, will still knock out the PRS.

The kind of protection afforded by a military-style, secure, and limited-access service is a far cry from what speakers like Goward are suggesting is needed to avert a potential catastrophe caused by GNSS failure.

Others are giving the EU a pass here, reasoning that the Galileo system isn’t even in space and operational yet and, therefore, not technically vulnerable to catastrophic or any other kind of failure. Go tell that to the European Space Agency (ESA).

No U.S. Cooperation with Russia
Representing the United States at the opening plenary were Ray Clore of the Department of State and Harold Martin of the National Coordination Office for Space-Based Positioning, Navigation, and Timing (PNT).

Clore surprised no one when he stated flatly, “We have no current ongoing GNSS discussions with Russia.” He may not have surprised anyone at the new event organized by the Royal Institute of Navigation, but with his matter-of-factness he did manage to elicit a few titters. Perhaps it was his rather un-European lack of delicacy that tickled the crowd.

Either way, it can make no one comfortable to know that the second major GNSS partner was out of the loop and completely absent from this “international” conference. GLONASS remains a key element in the global satellite navigation system of systems, as evidenced throughout the event, which featured a number of presentations on the subject of multi-GNSS, interoperability compatibility, and even “interchangeability.”

“We have engagement [with the Russians],” Clore admitted, “but no discussions, what with the situation in Crimea and the Ukraine, as you all know.”

Regulation Still a Challenge for Autonomy
“Safe, reliable, secure communication is hard to do,” said Lambert Dopping-Hepenstal of ASTRAEA, the mega-group that brings together major European players in the field of unmanned aircraft systems (UAS), with the aim of getting autonomous transport technologies off the ground. Like GNSS itself, these vehicles and their communications and remote piloting systems are vulnerable to jamming and spoofing.

On the other hand, as the citizens — and security services — of Paris have noted this past week, it’s not hard to operate an UAV just about anywhere you want. But doing so safely and within the rules is another thing altogether, especially when there are no rules.

Meanwhile, UAVs will simply have to remain on the ground — the legal ones, that is.

Quantum What?
Taking ideas from the mind-boggling field of quantum physics to the marketplace is the aim of a network of “excellence hubs” operating in the United Kingdom, including some the country’s most prestigious universities. And in the UK, that’s really saying something.

Leon Lobo of the National Physics Lab – Teddington delivered a presentation on quantum technologies that was supposed to have been presented by Sir Peter Knight of Imperial College – who’d been called away unexpectedly. Lobo started by apologizing for Knight’s inability to be in two places at once — presumably the kind of joke that physicists like to tell.

According to Lobo/Knight, highly advanced and extremely accurate clocks will be among the first technologies to make their ways from the quantum realm into the GNSS realm.

The audience ooh-ed and ahh-ed when Lobo mentioned that some of today’s atomic clocks are accurate to within a second in several hundred years. The same audience nearly fainted when he described a new quantum-based cesium fountain clock that will lose one second in every 158 million years.

He then drew chuckles by conceding that some would be asking, “Why do we care?” The answer was not clear, even after his rather impressive explanation, but we are convinced that there is no such thing as too much accuracy. We may not know why we need it today, but once we have it, we are sure to find a good use for it.