GNSS in Oregon? More Than You May Think! - Inside GNSS - Global Navigation Satellite Systems Engineering, Policy, and Design 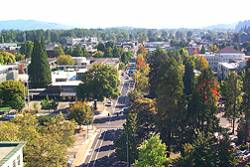 Downtown Eugene, taken from the building where the two leading GNSS journals got their start

by Glen Gibbons and Eliza Schmidkunz

[Updated August 8 2011] Few would mistake Oregon for the beating heart of GNSS. Still, modesty aside, for a medium-sized U.S. city in the Paciic Northwest, the Portland metro area and Oregon’s I-5 corridor has enough relevant involvement with the industry to justify hosting the Institute of Navigation’s GNSS conference in 2010 and 2011.

by Glen Gibbons and Eliza Schmidkunz

[Updated August 8 2011] Few would mistake Oregon for the beating heart of GNSS. Still, modesty aside, for a medium-sized U.S. city in the Paciic Northwest, the Portland metro area and Oregon’s I-5 corridor has enough relevant involvement with the industry to justify hosting the Institute of Navigation’s GNSS conference in 2010 and 2011.

Geocaching, for one thing. Love it or hate it, the GPS-guided treasure-hunting craze started here. The first cache (called by those in the know the “original GPS stash”) was hidden on a tree farm right outside of Portland the day after selective availability was turned off in 2000.

But what about business and technology? Aside from geocaching, does anyone actually do anything GNSS-related here except check traffic on their smart phones?

indeed they do. There’s FLIR Systems, for example, makers of infrared and thermal-imaging systems that keep company with GPS on autonomous unmanned aerial ehicles (UAVs). They’re an S&P 500 company based in Wilsonville, just south of Portland. (In July 2011 they laid off several dozen workers, citing a decline in military orders and costs of litigation arising from an acquisition. But still…..they’re here.)

Insitu, another Columbia Gorge-based company, designs and develops small autonomous aircraft. Founded in 1994, it now has 700 employees and is wholly owned by the Boeing Company. In August 2011, it unveiled a UAV that fits in the trunk of a car. It’s intended for the public safety market and features real-time video and high-rez imagery.

Intel Corporation has a major presence in the state’s “Silicon Forest” west of Portland. The company employs 16,250 people in Oregon according to the Oregonian newspaper, “more than 15,000” according to the company.  At any rate, it employs more people than any other private business in the state. The company’s most advanced technology is at its Ronler Acres campus in Hillsboro, where it is building a new, $3 billion research factory called D1X, scheduled to open in 2013. (Intel is so important to Oregon’s economy that it’s too big to tax.)

TriQuint Semiconductor, another hi-tech company in Hillsboro, Oregon, manufactures some of those tiny electronic components that go into GPS receivers and other mobile devices such as RM front-end modules that incorporate a low noise amplifier and filter at the GPS L1 frequency. The stock market has not been kind to TriQuint so far in 2011, but not because of unusual debt or excessive valuation. It grew very fast since 2010 and now has 984 employees. As of July 2011, it’s adding another 50 jobs, according to the Oregonian.

Named after fouders Gary Burrell and Min Kao, GARMIN has another round-about connection to Oregon: the King Estate Vineyard winery in Lane County, established by Ed King III. King III is the son of Ed King Jr., the founder of the original King Radio avionics company in Olathe, Kansas, later acquired by the Bendix Corporation/Allied Signal (and now a part of Honeywell).

In any case, Burrell hired Kao to join his division at Allied Signal’s King subsidiary in 1983. Kao had been working at Magnavox developing military navigation systems using the Global Positioning System constellation of satellites. During his years working with Burrell, Kao led the team that developed the first GPS navigation system that was to be certified for use in airplanes by the U.S. Federal Aviation Administration. (Okay, a tenuous connection, but kind of interesting.)

And, finally, there’s us: Inside GNSS. Both of the industry’s leading trade journals, Inside GNSS and GPS World, got their start 100 miles down the I-5 freeway from Portland in college-town Eugene.

Meanwhile, 2011 shows technology companies in extreme competition for qualified technical engineers and other experts.  While you’re visiting Portland, check out the job scene.  You may have a future in the Pacific Northwest.