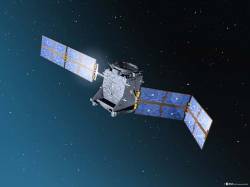 Europe commenced the space element of its Galileo more than two years ago with launch of the GIOVE-A (Galileo In-Orbit Validation Element-A) demonstration satellite (also known as the Galileo Satellite Test Bed-V2/A).

Europe commenced the space element of its Galileo more than two years ago with launch of the GIOVE-A (Galileo In-Orbit Validation Element-A) demonstration satellite (also known as the Galileo Satellite Test Bed-V2/A).

Along with its larger sibling, GIOVE-B, now due to launch in April 2008, GIOVE-A precedes introduction of the four IOV satellites, scheduled for launch in 2010. Built by Surrey Satellite Technology Ltd (SSTL), based in Guildford, the United Kingdom, GIOVE-A was launched in December 2005 and has been broadcasting prototype Galileo signals to the world since early 2006.

During this period, much has been learnt from the experimental campaign and the measurements taken on the ground. The signal-in-space (SIS) specification has been brought into the public domain on European Space Agency’s (ESA’s) website, where the GIOVE-A SIS Interface Control Document (ICD) can be downloaded. (See the Additional Resources section at the end of this article for the website URL.)

Recent activities include the detailed investigation into the end-to-end Galileo signal channel. A payload test-bed at SSTL has been used by ESA and Surrey Satellite for comparison with the signals received from orbit.

Following the success of GIOVE-A, and to assist with contingency planning prior to IOV launch, ESA awarded a further contract to SSTL in March 2007 to begin procurement of another satellite, GIOVE-A2, largely based upon the GIOVE-A design. GIOVE-A2 incorporates minor design improvements based on lessons learnt from the first satellite. Design commonality will permit SSTL to manufacture the satellite to a very tight timescale, to be ready for launch, if requested, as early as mid 2009.

ESA and SSTL are investigating the capability of modifying GIOVE-A2 to broadcast multiplex binary offset carrier (MBOC) designs to permit early experience with the new MBOC-based signals in anticipation of the operational Galileo system.

This article will describe the current status of the GIOVE‑A satellite and the achievements that have been made during the operational phase of the mission. We will then summarize briefly the current status of GIOVE‑A2, concentrating on the main differences in the payload and signal-in-space from the earlier satellite.

(To read the entire story, including graphs and figures, download the pdf above.)

Over the past two years, GIOVE‑A has proven to be an invaluable asset for ESA and the wider navigation community. The availability of representative Galileo signals-in-space has enabled ESA to validate their GIOVE Mission Segment and associated operating procedures and analysis algorithms, such as orbit determination and clock modelling.

This is an important step in preparing for the operation of the full Galileo ground segment. In addition, with the publication of the GIOVE‑A SIS ICD, many receiver manufacturers have developed GIOVE‑capable receivers and been able to verify their functionality using broadcast signals rather than simulations.

In coming months GIOVE‑B will be launched to provide continuity of the Galileo SIS and allow additional clock characterization activities for an on-board passive hydrogen maser in addition to rubidium frequency standards.

GIOVE‑B should then be joined by the GIOVE‑A2 satellite. If both satellites operate in parallel, this will allow more scope for experimentation.

Looking to the future, SSTL welcomes the recent announcements by the European Commission to finance the deployment of a full operational Galileo system through public funding. This new procurement approach will encourage value for money by introducing competition into the project at all levels. SSTL is teaming with OHB Technology AG, based in Bremen, Germany, to bid on the contract to build the operational Galileo satellites. Together, the partnership believes it can produce Galileo spacecraft quickly and at an extremely competitive price.

OHB would build the satellites; SSTL would produce the electronic payloads. The longer mission lifetimes specified for the full Galileo satellites mean that careful analysis of the space environment is needed before proposing unit designs that will meet these requirements while still remaining cost-efficient and compatible with a rapid development and production schedule.

Operational Galileo satellites have more stringent requirements than the GIOVE satellites, particularly much longer lifetimes, higher performance specifications, and additional services. However, the main payload units flown on GIOVE‑A were pre‑developments for the final constellation and are quite similar to those to be flown on the operational satellites. In addition, SSTL is still the only company with experience of operating the navigation payload units in‑orbit. These activities provide SSTL with unique payload knowledge and experience that can be transferred to production of the Galileo payloads.

Galileo now has a firm technical foundation through the GIOVE in‑orbit activities. Further progress with GIOVE‑B, GIOVE‑A2, and leading on to the IOV satellites will bring Galileo step by step towards an operational system.

The authors acknowledge the excellent ongoing work performed by both the SSTL and ESA project teams in supporting the operations and experimentation on GIOVE‑A. Thanks go to the staff at STFC, TAL and CL2 for the work supporting the IOT campaign at Chilbolton.

(For the rest of this story, please download the complete article using the PDF link above.)