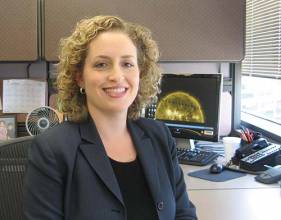 As Solar Cycle 24 rolls around toward its maximum peak next May, when a hundred or more sunspots may appear during the course of a single day, no single navigator stands at the helm to guide the hundreds of companies, research groups, users, and policy workers through the uncharted realm of spiking solar activity and its inevitable effects on GNSS.

As Solar Cycle 24 rolls around toward its maximum peak next May, when a hundred or more sunspots may appear during the course of a single day, no single navigator stands at the helm to guide the hundreds of companies, research groups, users, and policy workers through the uncharted realm of spiking solar activity and its inevitable effects on GNSS.

The unprecedented interconnectedness of GPS technologies with the functioning of modern life means that even isolated space weather–induced positioning and timing errors or minor shortages in the GPS resource can have serious consequences.

Even with calm seas and sunny weather, technology often outpaces planning and policy, setting up a sorcerer’s apprentice scenario in which product development and applications race ahead into a storm of unexpected consequences.

But if that scenario plays out differently for GPS and other satellite navigation systems, Fisher, senior advisor for space weather at NOAA’s National Weather Service Headquarters, can take part of the credit.

From her office in Maryland, she leads space weather policy and program development in partnership with the NOAA Space Weather Prediction Center in Boulder, Colorado. For years, the SWPC has hosted an annual workshop for scientists and major user groups to discuss the state of the art and science. But Fisher’s 2011 ground-breaking report “Satellite Navigation & Space Weather: Understanding the Vulnerability & Building Resilience” was perhaps the first truly comprehensive policy document that linked the two subjects and communities.

Completed near the end of Fisher’s 10-year service as a senior policy fellow at the American Meteorological Society (AMS), the report came out of a 2010 AMS workshop of high-level scientists and policy makers that she led.

“People told me this was the first time the space weather community, the GPS community, and policy [makers] discussed these issues together,” Fisher says. Before then, such conversations took place one on one, usually among colleagues.

Her engagement with the GNSS community deepened last year when she presented the report’s recommendations during a panel discussion on space weather effects at the Institute of Navigation GNSS 2011 conference in Portland, Oregon.

The report’s synthesis of scientific and policy concerns shows the work of a savvy interpreter. Or, perhaps, the skills of someone who has long straddled two worlds.

A Dual-Track Mind
Fisher holds a master’s degree in public policy and a doctorate in atmospheric and space science completed simultaneously at the University of Michigan, an unusual combination of interests even more rarely pursued in academia.

First, space science: it’s not every astronomy student who chucks stars and galaxies for Earth’s own gases, but as an undergraduate studying with atmospheric scientist Bob Kerr during his tenure at Boston University, the choice was easy.

“For me, it just seemed more interesting than deep space, understanding the dynamics of the Earth’s atmosphere and the influence of the sun,” Fisher says. It marked an engagement with science that was up close and personal as opposed, in Fisher’s words, to “something far out in space.”

A research project with Kerr led Fisher to a National Science Foundation Research Experience for Undergraduates fellowship at Puerto Rico’s Arecibo Observatory the summer after her junior year. More than just an introduction to field research, the program was an immersive experience with other students that involved local food excursions, scuba diving, and the all-night bonding sessions that come with measuring air glow with optical instruments.

“I think those types of programs are so valuable for students, because it gives you an opportunity to see what research is like [and to decide] ‘Is this for me or not?’”

Another seed planted in Fisher’s mind during a Philosophy of Science course a few years later would bloom into something equally, if not more, important. “All of a sudden, I saw the field of science differently,” she says. Where before she had thought of science as being just about “the scientific method and equations,” now she saw that “it had this whole human dimension to it” — including the mundane, but all-so-important, aspect of funding.

“Thinking about the role of government in supporting science” became more compelling to her. That’s when she started reading about the philosophers of science not as homework, but as guides for her professional journey.

To hear Fisher talk about the late Princeton political scientist Donald Stokes’ Pasteur’s Quadrant — a 1997 critique of the relationship between scientific research and government — is to see how she understands science and policy. Stokes developed the idea of “use-inspired basic research” to address the tension between pure science and technological innovation.

“Typically, you learn that a scientist’s role is to do research,” Fisher says. “But the idea that there are different kinds of research—basic, applied, and use-inspired—is not something you learn about when you are in school,” Fisher says.

Two years into the University of Michigan doctoral program in space science, thanks to the influence of her advisor —Dr. Timothy Killeen — who was also involved in both worlds, Fisher applied for a second degree track in public policy.

Getting accepted in the policy program changed her whole outlook towards what she was doing in school. Suddenly, there was a light at the end of the tunnel. “I was just so excited . . . so highly motivated and passionate,” Fisher says. “In an unusual way it motivated me to do my science research more effectively,”

On the space science side, her dissertation explored the dynamics of the winter northern polar mesopause, which concerns the region of the atmosphere just below the ionosphere. Her independent studies leading to the master’s degree in public policy addressed the role of presidential leadership in scientific advances of the past.

A Preoccupation with Policy
In her current position, Fisher oversees the planning of space weather services within the NOAA strategy, execution, and evaluation process and helps formulate budget priorities. Here her goals include gaining an understanding of the space weather policies needed to build resilience into GNSS equipment and applications.

Fisher’s preparation for that task received an immense boost from the high-level 2010 AMS workshop that she organized on space weather and satellite navigation. Drawing representatives from industry, academic, and research organizations, the two-day event also attracted high-level participation from federal departments and agencies, such as the National Coordination Office for Space-Based Positioning, Navigation, and Timing (PNT), and the Office of Science Technology Policy (OSTP), whose director also serves as the president’s chief science advisor.

Research and policy studies had already educated Fisher about the problems that the ionosphere posed for GNSS. But the growing presence of GNSS people at conventions such as the annual NOAA Space Weather Prediction Center workshop — not just speakers, but members in the audience — made her aware of the profound interrelationship between the two groups’ endeavors.

Oil companies acknowledging that they use space weather information to determine their drilling schedule day to day, or precision agriculture practitioners recounting how they depend on reliable access to high-accuracy GNSS positioning, suggested that the time was ripe for a more proactive effort to bring these areas of expertise together.

Support for the idea of meetings held expressly for crossover discussions emerged slowly, nurtured by relationships Fisher developed with a diverse set of people and organizations.

One early, but key, decision by Fisher: make the meetings open dialogs among invitation-only participants, rather than lectures open to the general public.

“It wasn’t people just giving talks,” Fisher says. “This was a real discussion we were developing.”

Before the workshop, only two government reports had discussed space weather issues in connection with GNSS, Fisher points out. A 2001 study by the U.S. Department of Transportation that examined the vulnerability of national infrastructure did mention space weather and how it affected navigation satellite signals. Then, in 2008, the U.S. Federal Radio Navigation Plan named the ionosphere as the largest source of error for GPS equipment interference.

After two days of interactive dialog, however, the workshop produced core recommendations on such subjects as completing the modernization of the GPS enterprise, ensuring backup systems, and setting standards that enable satellites and receivers to handle extreme space weather conditions.

As a GNSS signal propagates through the ionosphere, the speed and direction of the signal is changed in proportion to the varying electron density or TEC along the line of sight between the receiver and the satellite. This in turn affects the GPS range observable: a delay is added to the code measurements and an advance to the phase measurements.

When a radio wave crosses through the ionosphere, it results in a distortion of phase and amplitude. These fluctuations are called scintillation and create rapid variations in signal power, reducing the received power and phase coherence of the GNSS signals, which can cause a loss of lock on the signal.

Solar radio bursts begin with a solar flare that injects high-energy electrons into the solar upper atmosphere. Radio waves are produced, which propagate to Earth and cover a broad frequency range, acting as RF noise (magnitude, polarization) that can degrade GNSS signals.

GPS users rely on updates of the scintillation and TEC measurements to anticipate the functionality of their instruments on a daily basis. Currently, TEC forecasts are available on the National Weather Service’s space weather website, but scintillation readings only exist in “Nowcast” form, a very short range forecast covering a specific geographic area. Fisher is working to add more accurate forecasts to the agency’s lineup of services. There’s still a lot that’s unknown.

Agenda for the Future
One of the problems highlighted in the 2011 report is the lack of measurement and observations, Fisher says. “We need a lot more ground-based ionospheric measurements. We don’t even fully understand ionospheric storms, and in order to make better predictions, we need to better understand how the ionosphere behaves.”

Moreover, a substantial and broad study has yet to be undertaken that explains and quantifies how space weather affects various types of GNSS equipment and services.

Companies that provide GNSS-related services often use their own models of the ionosphere to account for any corrections in GPS signals. But what data they use, how well they perform in the worsening solar conditions, and how well different types of GNSS receivers perform even in relation to each other is not something we can judge without a great deal more research, Fisher says. Moreover, many of the receiver models appearing on the market since the last solar maximum in 2001 have not been tested for their ability to handle the upcoming peak in the solar cycle.

NOAA may have a good sense of the gaps in ionospheric research, but to influence policy formation that affects them, GNSS users will need to speak up and provide guidance.

Consequently, the industry needs to develop a position on how to address this emerging emphasis on standards for receivers, Fisher believes.

“Should [companies] be self policing?” she asks. “Should they be coming up with their own restrictions? Do they really want the government coming up with these requirements? This is a question the GNSS community needs to answer.”

“The government is going to make decisions that affect the GNSS community,” Fisher says. “So, the community needs to be vocal in that process. Otherwise decisions will likely be made for them.”

At NOAA, Fisher proudly represents the public counterpart to GNSS users and manufacturers, saying, “I am part of an agency that is applying science and services to the benefit of society.”

GNSS services and applications have penetrated deeply into our daily lives. And, if her work so far is any indication, Genene Fisher will continue to influence the integration of space weather science into the GPS industry to the advantage of future GNSS users and researchers.