The European GNSS Agency (GSA) has published the Q3 2019 performance report. This report covers the period when a technical incident caused by an equipment malfunction in Galileo last July resulted in a six-day interruption in Galileo navigation and timing services. This had an important effect on the program. Following the incident, an independent Inquiry Board was set up by the European Commission to investigate its causes and to make recommendations for actions to avoid another such incident in the future. The report is downloadable here.

The MPLs address several parameters of interest, and can be grouped into two categories:

Accuracy MPLs are statistically defined as “95th percentile and calculated over a period of 30 days, using a sample of measurements taken every 5 minutes and considering only those epochs where the signals were healthy. In line with other GNSS constellation providers, timing parameters are normalized over a year by averaging the past twelve 30-day periods. For accuracy parameters, the smaller the achieved value, the better.

Availability MPLs are reported as percent, and calculated over a period of 30 days, using a sample of measurements taken every 5 minutes and considering all epochs (healthy or not). Again, in line with other GNSS constellation providers, some parameters are normalized over a year by averaging the past twelve 30-day periods (timing and per-slot availability). For availability parameters, the larger the achieved value, the better.

The Galileo system is currently in a partial deployment stage, with some satellites still to be launched and a number of ground infrastructure upgrades on-going to provide redundancy and complete all functionalities. For this reason, the MPL commitments published in the SDD include margins that account for possible planned and unplanned outages.

The Galileo incident in July 2019 prevented the refresh of the data transmitted by the satellites, therefore eventually the signals were flagged as not healthy and/or the data became outdated. This caused an impact on the availability MPLs that are calculated monthly. These parameters went well below the values typically provided by Galileo, yet in most of the cases (all but two) they stayed above the committed figure, which includes margins for the reasons explained above. The performance report, therefore, displays them as “green” in the dashboard, however the trend chart clearly shows the difference with the months of June and August and the margin with the MPL. 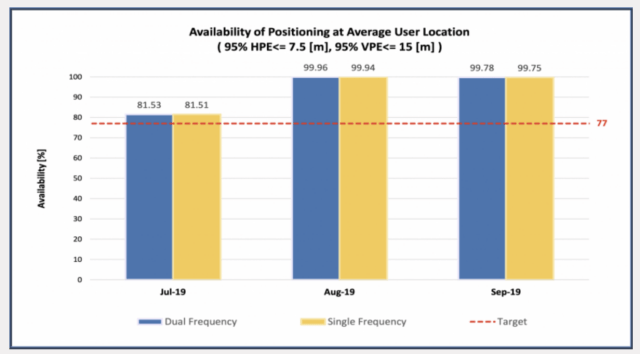 The committed value (MPL) is 77%. Due to the incident in July, the signals were not available for some days and the parameter was only met 81% of the time, whereas in August and September it was met well above 99%. Still, all values are above the target.

Another example (Figure 16 of the Quarterly Performance Report Q3 2019, page 13) for the time determination availability: 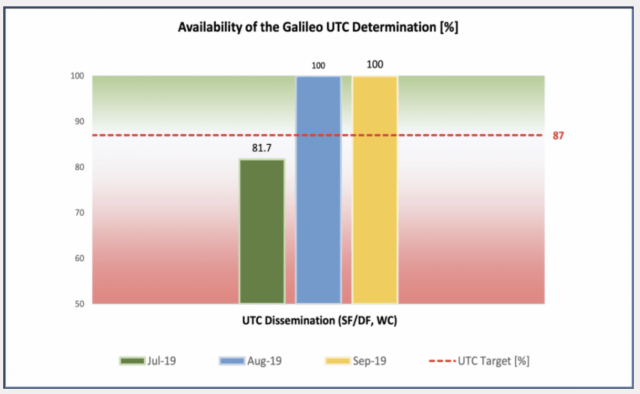 In this case, the committed value (MPL) is 87%. Due to the incident in July, the parameter was only met 81% of the time therefore not fulfilling the target, whereas in August and September it was met 100%.

During the 3rd quarter of 2019, whenever the signals were Healthy, they provided good performance. Therefore, the accuracy MPLs were fulfilled despite the incident. 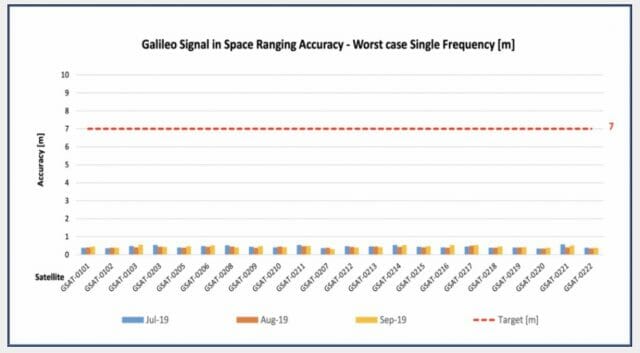 The committed value (MPL) is 7 meters, 95%. During July, August and September, 95% of the time where the signals were healthy the error was below 0.5 meters for all satellites. Therefore, the target was largely met.

Regardless of the fact that the published MPLs were mostly met due to a proper estimation of the margins associated to the current deployment status, the program stated that it fully recognizes the magnitude of the service outage, and is working consistently on actions to increase Galileo’s stability, robustness and resilience. This will translate into a future update of the Service Definition Document, including more stringent commitments with lower margins, and the reporting of the delivered performance according to the new MPLs.