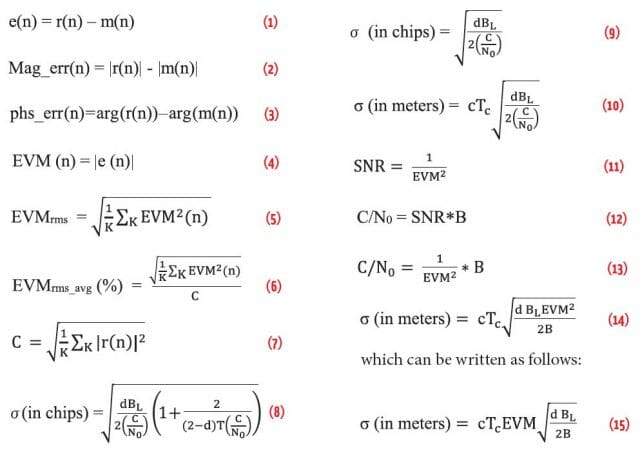 As a navigation satellite transmits multiple signals on single frequency (e.g., Open Service and Restricted Service over L5 Band), these are combined on a common carrier to comprise a composite signal. This composite signal passes through navigation payload subsystems such as an up-converter, traveling wave tube amplifier (TWTA), filters, and so on. These subsystems may introduce adverse effects on the signal, such as amplitude and phase distortion, nonlinear effects, gain imbalance, IQ imbalance, and phase noise.

As a navigation satellite transmits multiple signals on single frequency (e.g., Open Service and Restricted Service over L5 Band), these are combined on a common carrier to comprise a composite signal. This composite signal passes through navigation payload subsystems such as an up-converter, traveling wave tube amplifier (TWTA), filters, and so on. These subsystems may introduce adverse effects on the signal, such as amplitude and phase distortion, nonlinear effects, gain imbalance, IQ imbalance, and phase noise.

A navigation receiver finds its position by calculating satellite-to-receiver pseudoranges using satellite ephemeris and time information available in the navigation message. The accuracy of the navigation solution depends upon the size of various ranging errors caused by such factors as ephemeris error, satellite clock error, ionospheric error, tropospheric error, code tracking error, multipath error, and satellite geometry. Hence, we need to analyze and to identify the effects of payload impairments on the ranging error in order to help determine the performance of a navigation payload.

Error Vector Magnitude
As discussed in the paper by Hassun et alia listed in the Additional Resources section near the end of this article, the error vector is defined as the difference of measurement waveform to the reference waveform. Considering the discrete waveforms, the definition can be given as:

in which n represents the symbol points; r(n), the reference waveform; m(n), the measured waveform; and e(n), the error vector.

All quantities are complex numbers, representing IQ samples of the respective waveforms. Error vector provides information regarding deviation of the measured waveform from the reference waveform. The following parameters are further defined as:

The RMS value of EVM is defined as:

where K is the number of unique symbols in a constellation.

Here C is the normalization constant given as:

Code Tracking Error
A navigation receiver obtains the pseudorange measurement by estimating the received code phase in a navigation satellite signal. It employs a code-tracking loop, generally a non-coherent delay lock loop (DLL) to track the signals from each satellite. The DLL correlates the received signal with a slightly early and a slightly late replica of the code.

Error in code phase estimate is introduced in the code-tracking loop due to the presence of noise, interference, and other impairments. This error propagates in the measurement of a pseudorange. The code tracking error (σ) in the presence of white noise is a random variable with zero mean, thus:

In equation (8), the second term 1/T(C/N0), represents the square-law small signal suppression effect of the noise and becomes important if the signal-to-noise ratio is lower. We are considering the SNR at the output of the payload, which will be higher. So, for the higher SNRs equation (8) can be represented as follows:

The code tracking error (one-sigma) in meters can be obtained as follows [3][4]:

EVM and Code Tracking Error Relationship
As mentioned earlier, EVM represents the effects of noise and various linear/non linear distortions of the transmitter. These distortions may be correlated or uncorrelated with the desired signal.

Due to de-spreading of the pseudorandom noise (PRN) code, the correlated/colored noise and distortion at the correlator input becomes uncorrelated and normally distributed at output. Even the deterministic DC offset is mapped on a random signal in the code domain. Thus, independent of a particular implementation, a simple additive white Gaussian noise (AWGN) channel between encode and decode can replace a total CDMA transceiver. So, as described in the paper by M. Ali-Hackl et alia (Additional Resources), reception of a signal with a certain EVM is equivalent to reception of a distortion-free signal in AWGN with the following SNR:

Here we do not consider receiver noise; so, the noise in the SNR is only due to transmitter impairments. The SNR of the spread spectrum signal is a function of the point in the receiver under consideration. Therefore, it is convenient to normalize the SNR to a one-hertz bandwidth and then achieve a signal-to-noise ratio that is bandwidth independent:

From (11), the C/N0 at the receiver correlator input with pre-correlation bandwidth (B) can be related with EVM as follows:

Substituting (13) in (10) for C/N0 gives the following code tracking error:

Equation (15) gives the desired relation between the code tracking error and EVM.

Verifying the Results
The relationship between EVM and code tracking error derived in the previous section can be verified by measuring σ against EVM. In doing this, we cannot directly control EVM and then measure the code tracking error with standard instruments. With proper assumption of system parameters, however, we can first verify the relation between EVM and SNR and then establish the relation between σ and EVM.

Verification of relation between EVM and SNR. We designed a test setup to verify the relation between EVM and SNR that incorporated a precision C/N generator, a vector spectrum analyzer (VSA), and a vector signal generator as shown in Figure 2. The PSG generates a clean test signal, which is input to the C/N generator. The C/N generator outputs a noisy signal with a controlled C/N ratio. The corresponding EVM is measured on the VSA. Table 1 provides the instrument settings for the test setup, and Figure 3 and Figures 4, 5 and 6 show the C/N generator output constellation and spectrum observed at the VSA for 10- and 20-decibel C/N ratios, respectively.

Table 2 and Figure 7 compare the measured and theoretical EVM as per equation (2). These results verify the EVM versus SNR relationship.

Establishment of relation between σ and EVM. Typical navigation signal parameters and typical user receiver parameters are given in Table 3 and Table 4, respectively.