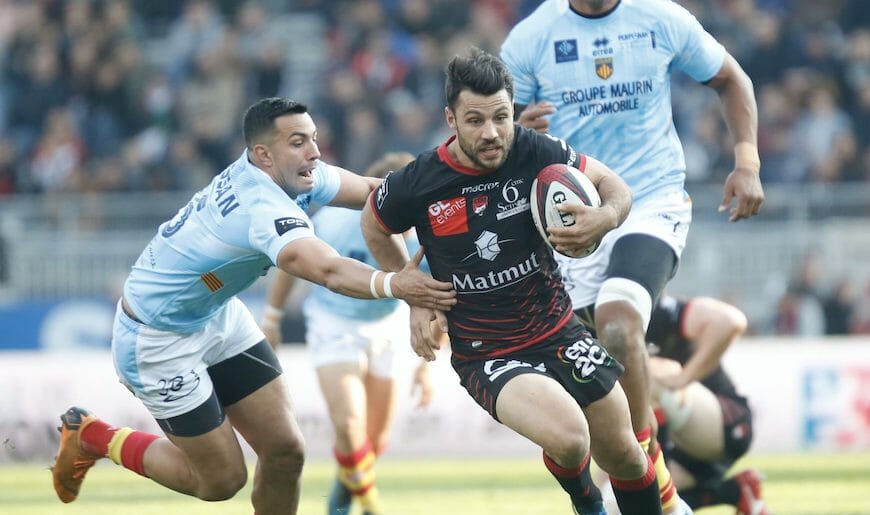 A consortium is preparing to ramp up production of Geonav IoT, a seamless indoor/outdoor positioning solution for sports applications, asset tracking and aiding drone traffic management. The GNSS module is a high-accuracy, dual-frequency system-on-chip with an integrated, low-power application processor.

The promise of the Internet of Things (IoT) continues to focus attention among tech developers around the world. As a core IoT technology, GNSS enables the key positioning capability for personnel and asset location and tracking, for new applications such as sports and military training, and in emerging markets such as drone-based transport and delivery. However, GNSS performance is still limited in unfavorable environments, and this has pushed developers to investigate combining GNSS with complementary location technologies. Geonav IoT, from a consortium led by France’s Thales, integrates multi-frequency, multi-constellation GNSS, ultrawideband (UWB), and 5G for a seamless indoor/outdoor positioning solution, according to the company. Thales and ChipCraft are joined by Hertz Systems, charged with industrial-scale production, and by Drone Consultants Ireland, and Telespazio France.

Initially funded by European Space Agency in the frame of NAVISP program, the project is now supported by the European GNSS Agency (GSA) under the European Union’s Horizon 2020 research framework. In this context, Geonav IoT is part of a wider push by the EU to stimulate development of more efficient and reliable, low-power IoT technologies.

“We believe we have a positioning solution that will function reliably and continuously even in difficult environments,” said Laurent Arzel, Project Leader in the Navigation Downstream Department at Telespazio France. “Geonav IoT works indoors, in urban canyons and in sports
stadiums, without diminished performance in terms of accuracy, availability, and time-to-first-fix.”

“We have developed three types of Geonav IoT tracking devices,” Arzel said, “each designed for a specific use case. We also have dedicated web-based monitoring applications that will utilize mobile 5G network infrastructure. And we have developed UWB anchors. These are small, easy-to-install, pseudolite-like devices. We are prepared to market the system to a variety of clients and down-stream user groups.”

NaviSoC detects a wide range of signals from all operational GNSS constellations. The SoC, which is connected to a small passive antenna, can provide precise position, velocity and time, or raw GNSS data for fusion with the inertial measurement unit (IMU) data, all without the need for an external application processor. User applications can be executed directly in the SoC. According to ChipCraft, NaviSoC is the first dual-frequency, single-chip GNSS receiver equipped with a multi-core application microcontroller with embedded flash memory.

“A myriad of applications are possible” said Arzel. “In all cases, weight and battery consumption is something we want to minimize. On the other hand, we believe the knowledge tat positioning is functioning well and giving an accu- rate reading is very welcome and can more than make up for a small amount of added weight and power use.”

Geonav IoT is primarily aimed at location-based services (LBS) markets. The consortium partners are focusing their energies on application areas where they think Geonav IoT can be successful immediately. Specifically, the project has tested its IoT devices in three different applications: elite sports; industrial asset tracking; and tracking of autonomous drones. 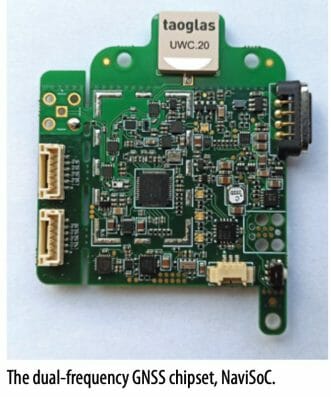 Thales has already tested an earlier version of Geonav IoT in partnership with the French Rugby Federation, using Geonav IoT to monitor players’ performance and safety. High-level sports organizations like the Federation are very open to using all available tools and the latest technologies to maximize the benefits of player training and assessment. A Geonav IoT device, placed on a player’s jersey just between the shoulder blades, allows the player’s movements and speed to be tracked extremely accurately.

Thales wanted to test Geonav IoT in a number of realistic sports-linked environments, including uncovered stadiums and training fields, partially covered stadiums and completely covered stadiums. Covered stadiums in particular can be very difficult environments for location- based services. Weak GNSS signals are, by definition, vulnerable in indoor and semi-indoor settings, while spectators’ mobile phones, in highly crowded conditions, along with all manner of television and other communication signals, can create complex interference effects.

Geonav IoT devices computed and transmitted via a Bluetooth-connected cardio belt at 1 Hz data and information from equipped rugby players, including position and speed, acceleration, heart rate, remaining battery power, and impact detection. All of the key data can be displayed on-screen, via 5G connection, to operators in real time. The system can be adapted, finely tuned and programmed, for example to deliver impact and collision alerts, helping to reduce the risk of injuries.

All of the Geonav IoT equipment used in the study was tailored to conform to World Rugby regulations on wearable devices, in terms of size, weight and resistance to impact.

The rugby application should be seen as a test case. Similar applications in other sectors, such as security and defense, have already been envisaged. These include the tracking and assessment of movements of connected soldiers, weapons and vehicles, in training and advanced military maneuvers.

The IoT has been widely hailed as an efficient means for locating and track- ing personnel, goods, vehicles and other high-value assets. The Geonav IoT solution is well adapted to a variety of industrial asset-tracking applications, indoors and out, without loss of signal. An earlier version of Geonav IoT was tested by Nexter Systems, the French government-owned weapons manufacturer, which has used Geonav IoT devices to precisely locate equipment at regular intervals, and to track machines and tools on their production sites, indoors and outdoors, and during inter-site transport.

For Nexter Systems, as for many other industrial operations, the ability to continually locate assets will greatly improve production process planning, monitoring and efficiency. Many other similar, industry-related applications have and will be imagined.

Drone-based services are expanding rapidly across virtually every industri- al, commercial and public sector, with GNSS playing a fundamental role in these operations. And yet, unmanned aerial systems have still not been inte- grated into the long-established air traf- fic management systems that rule over airborne vehicles.

“With the emergence of the drone industry come many challenges,” Arzel said. “The growth in the number of operations is significant, and with the introduc- tion of commercial drone deliveries and the future possibility of passenger drones being added to the mix, the potential of busy skies and conflicting flight paths becomes a major safety issue.”

Air transport authorities around the world have a lot of catching up to do, and when drone integration into the wider air traffic management ecosystem does eventually take place, bodies like the Federal Aviation Administration (FAA) in the US and corresponding authorities in Europe may find themselves implementing some- what dissimilar solutions. Unmanned traffic management (UTM) will play a crucial role in the widespread adoption of drones, especially in urban areas. In the U.S., it is envisaged as separate from but complementary to the FAA’s ATM system.

The Geonav IoT approach equips drones with a basic locating system that will provide essential tracking capabilities, ultimately useable by whatever UTM solution comes into effect. “We aim to provide an accurate, real-time holistic approach to UAV location and trajectory,” said Arzel, “by creating and placing on the market a baseline module that can be affixed to the craft as the primary location device. And we will encourage multiple service providers to share basic location information through whichever UTM system is being operated in that particular airspace.”

Geonav IoT partner and drone manu- facturer Drone Consultants Ireland will soon integrate and test dedicated Geonav IoT technologies in autonomous drones for home meal delivery by Ireland’s Manna Aero. The system will calculate and transmit position and speed in real time and in all environments. 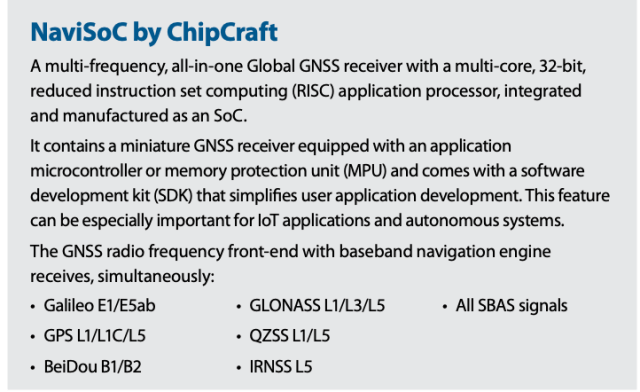 From a vague rumor just a few years ago, the first-phase IoT is now becoming a reality. The number of potential applica- tions for IoT systems is not yet known, but clearly money can be made here. Observers cite asset tracking as the area of immediate opportunity. Geonav IoT and similar solutions will soon be operating in factories and shopping malls, on military facilities and in and around airports, offering a high level of precision, continually and reliably, for countless and potentially lucrative LBS applications.

“There is a large and consistently growing global market for industrial asset tracking, with a small regional variability,” Arzel said. “The market analysis we are using shows an average compound annual growth rate (CAGR) of 10% for the next five years. But we are still in the early stages and it is difficult to fully define the growth trajectory. We plan to grow incrementally, starting with adoption by an existing client base of local players that have already expressed an interest and are keenly supporting the project.

“On the UAV/drone side, the market is growing exponentially, including hobbyists and professional users. In many countries, there are now more registered drones than actual manned aircraft. In some places, such as Ireland, the U.S. and some African regions, drone deliveries of medicines and groceries have already become commonplace.

“Many companies that have specifi- cally set out to design and manufacture passenger drones, such as EHang and Volocopter, are now seeing aviation giants like Boeing and Airbus, and car manufacturers Audi and GM joining the race, all seeking a slice of the pie. We believe the introduction of new EU drone regulations will pave the way for future expansion and innovation in all facets of the industry. When it comes to IoT for drones, the sky is literally the limit!” 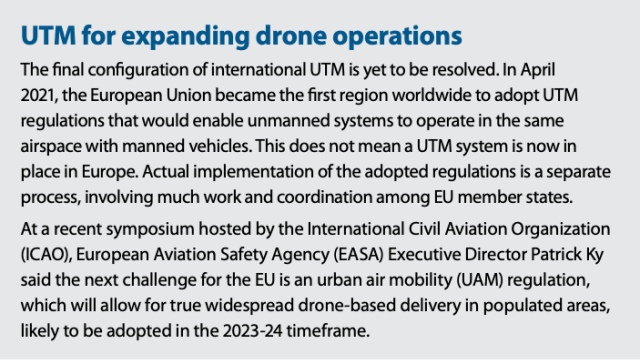