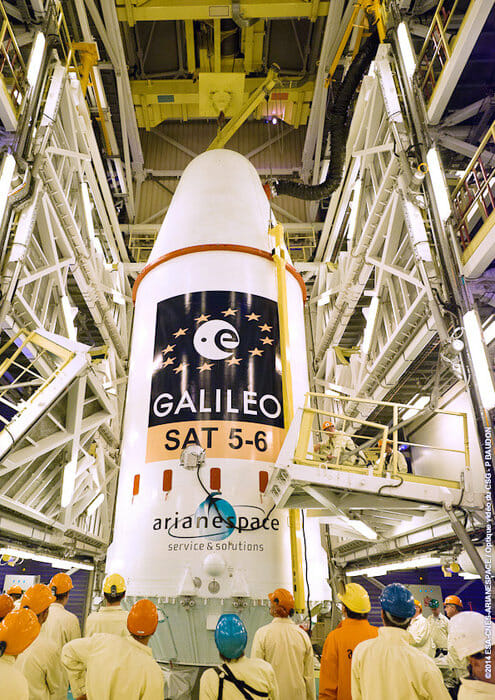 Europe’s fifth and sixth satellites on top of their Soyuz launcher at the top of its mobile gantry before their errant August 22, 2014, launch. ESA/CNES/Arianespace

An independent inquiry commission chaired by Peter Dubock, began its work on August 28, 2014, its task: establish the circumstances of the so-called “major anomaly” that resulted in two Galileo satellites being placed into incorrect orbits last week.

The inquiry commission will identify root causes and associated aggravating factors, offering recommendations to correct the problem(s) and to allow for a safe return to flight for Soyuz launchers from the Guiana Space Center.

An independent inquiry commission chaired by Peter Dubock, began its work on August 28, 2014, its task: establish the circumstances of the so-called “major anomaly” that resulted in two Galileo satellites being placed into incorrect orbits last week.

The inquiry commission will identify root causes and associated aggravating factors, offering recommendations to correct the problem(s) and to allow for a safe return to flight for Soyuz launchers from the Guiana Space Center.

In addition to being a former ESA Inspector General, Dubock also led the Tender Evaluation Boards for the Galileo fully operational capability (FOC) satellite contracts. He is widely considered very knowledgeable, both on technical and project management matters.

The Russian space agency Roscosmos, has designated Alexander Daniliuk, deputy director general of TsNIImash, as board liaison. Our sources in Brussels say it is also understood that Arianespace and Roscosmos will undertake their own joint investigation of the failure.

Such investigations are not unusual and, in fact, are carried out whenever there is a major launch failure. What is unusual is the rather well-rounded make-up of the commission. Brussels insiders say including a member from the European Commission, for example, may be designed to help the Galileo program’s proprietor save some face vis-a-vis public opinion.

The common understanding at this time is that the full investigation, including corrective actions, will not take less than six months to complete and could take much longer.

Where to Look
What exactly will investigators be looking for? Hardware/software issues? Programming flukes? Human error? Sabotage?

“All of the above,” say our sources.

The Russians are known for being very conservative and tend not to fiddle much with their sometimes old-fashioned but otherwise very reliable Soyuz launchers. However, it is almost certain that the attitude control of the Fregat stage did not work properly, thus orienting the final thrust in the wrong direction.

Human error is a possibility, sources say, but sabotage seems unlikely. A micro-meteorite impact, on the other hand, probability not zero but infinitesimal, has been floated.

Meanwhile, ESA says in spite of the orbital error, operations onboard the satellites are going smoothly. Both satellites now have their solar arrays fully deployed and are generating power.

The ground teams at ESA’s control center ESOC in Darmstadt, Germany, in cooperation with satellite manufacturer OHB, confirm the satellites are in good condition, correctly pointing towards the sun and fully under control of the ESA-CNES team, who are now ready to proceed to early operations phase activities.

ESA teams are considering how now to exploit the satellites to maximum advantage, despite their non-nominal orbits and within the limited propulsion capabilities.

According to our sources in Brussels, ESA is expected to try to correct the orbital eccentricity by raising the perigee, i.e., making the orbit more circular, with the additional benefit of keeping the satellites away from the van Allen radiation belts, which are dangerous for the survival of the payload hardware. ESOC controllers are not likely to try to correct the orbital inclination, which would require too much propellant.

Sources say that while it is difficult to envisage a scenario wherein the two satellites will ever form a part of the final Galileo service-providing constellation, they could be used for experiments and to debug problems in the FOC design.

As far as future launches are concerned, our sources say even thinking about a new launch schedule before the inquiry runs its course would be ridiculous.

“Another launch failure would kill Galileo forever,” one observer said.

Red-Faced But Undeterred
The failure to place the latest two Galileo satellites into their correct orbits has been a public relations disaster.

Some have opined that communicating the failure was managed very badly. True, eyes have been seen to roll and readers slap their foreheads at some of the wording of Arianespace’s recent press releases, e.g., “[W]e would like to offer our sincere excuses to ESA and the European Commission for this orbital injection that did not meet expectations,” but to be fair it is hard to imagine a more embarrassing failure to have to admit to.

All of this, inevitably, has raised even further the already existing doubts about whether Galileo is worth the money that has been spent and will be spent on it. Stalwarts in Brussels still hold, and probably correctly, that Galileo is more strategically necessary than ever, for Europe and the West in general. But what is being questioned is the overall organization presently managing the program, with comparisons being drawn between Galileo and GPS.

The American system, it is pointed out, features stronger industrial primes and two separate and independent government organizations for developing/procuring the system and for running it. Well, that seems to work in America, it may be worth trying across the pond, where “something, anything,” is looking more and more like a viable answer for Galileo.