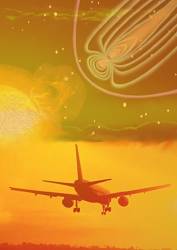 The issue is key to the upcoming implementation of GNSS-based air traffic management operations in Europe’s airspace. The sun is in one of its regular cycles of increasing activity and intensifying the Earth’s ionospheric space weather effects.

Eurocontrol has contacted with French engineering consultants Egis Avia to study the effect of ionospheric disturbances on GNSS-based applications for different phases of flight, then develop and test mitigation techniques.

In a June 25 press release, the company said they would extend other studies undertaken in Europe and the result should be a “a genuine ionosphere model suitable for aviation operational needs."

EUROCONTROL, the European Organization for the Safety of Air Navigation, coordinates and plans air traffic control for Europe. It has 38 member states and is headquartered in Brussels. Its goal is to create seamless air traffic management throughout Europe.

The European Commission and EUROCONTROL were founding members of SESAR (Single European Sky ATM Research) Joint Undertaking. Like NextGen, the civil aviation modernization program in the United States, the European organization is putting in place new technologies and methods — highly reliant on GNSS — to deal with fragmented airspace and congestion.

On June 21, the EC and the U.S. Federal Aviation Administration (FAA) agreed to cooperate in civil aviation research and development, with the goal of interoperability between NextGen and SESAR. The agreement will take effect in 2011.

How is solar activity predicted and how can predictions be
used with GNSS? (GNSS Solutions, March/April 2010)

How to Survive the Next Solar Maximum (Inside GNSS,
July/August 2009)