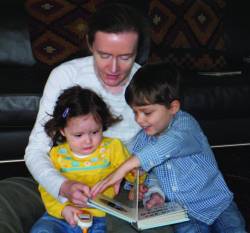 Elizabeth Rooney at home with Hana and Joseph

GNSS event that most signified to you that GNSS had “arrived”

GNSS event that most signified to you that GNSS had “arrived”

1) “The GPS constellation was mature by the time I started working on GNSS but GLONASS was lagging behind. I remember when the GLONASS constellation reached 24 satellites in January 1996 and the system was declared operational. At the time I thought it was a significant milestone — two operational GNSS constellations that would provide good coverage and availability even in urban canyons and other challenging environments.

Alas, the Russians were not able to maintain their momentum and GLONASS quickly went into decline. It was a long time before they recovered.

2) “The second event was the presidential decree from Bill Clinton in May 2000, removing Selective Availability from GPS signals. For me this was a clear sign that GPS had crossed a line from being a military system, with some useful benefits for other users, to being an essential system for everyday life.

“Since then, GNSS, and GPS in particular, has become ubiquitous, and I feel distinctly behind the times with my mobile phone that does not contain a GPS chipset!”

“A few years ago there were lots of stories in the news about cars getting sent the wrong way down one-way streets or being directed into rivers. Possibly down to lack of understanding of the technologies involved, the blame was directed at GPS rather than the inadequate or out-of-date mapping tools that were the real cause of the problems.”

“Being a physicist at heart, there are a lot of equations to choose from, but I think I would say Maxwell’s equations.”

Maxwell’s equations describe how electric and magnetic fields are generated and altered by each other and by charges and currents. They are named after the Scottish physicist and mathematician James Clerk Maxwell, who published early versions of the equations between 1861 and 1862.

“When you first encounter Maxwell’s equations in physics they are convenient formulae for calculating electric and magnetic fields,” Rooney says. “It is only when you look more deeply that you appreciate that the equations represent the first unification of two fundamental forces. They were the result of a significant shift in philosophy and they underpin much of classical physics, and still have significance in modern quantum physics.”