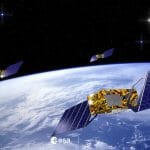 The European Commission cut its space budget for the next seven years but kept the Galileo and Copernicus satellite programs largely on track. The move came after intense negotiations over a 1.8-trillion-euro European Union budget seeking to absorb and remedy economic impacts of the coronavirus pandemic. 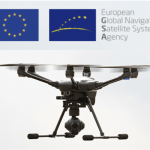 The European GNSS Agency (GSA), the operational agency of the European Commission for Galileo and EGNOS, is launching its MyGalileoDrone competition on July 17. This contest is targeting the design and development of drone-based applications or services, using a Galileo-enabled receiver, that address the EU’s key priorities such as the Green Deal, and support the EU Recovery Plan for Europe. 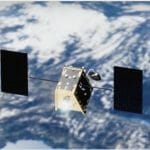 UK Acquires OneWeb LEO Constellation, But Won’t Work for SatNav — Or Maybe It Will

Britain has signed a £900 million ($1.135 billion) deal to buy a part share of satellite operator OneWeb, a low-Earth orbit constellation in-the-making, designed to provide global high-speed broadband services. There had been speculation that the government intended thereby to generate its own satellite-based navigation signals, as it has been shut out of Galileo security signals by its Brexit move. Some satnav experts quickly dashed that notion, but others demonstrated that it just may be possible. 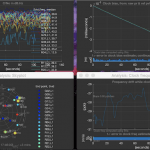 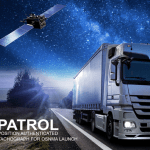 Galileo on PATROL for Driver and Road Safety

The Position Authenticated Tachograph foR OSNMA Launch (PATROL) project is developing the first external GNSS facility for smart tachographs, using Galileo’s new Open Service Authentication (OS-NMA). The tachograph, a device fitted to a vehicle that automatically records its speed and distance, together with the driver’s activity selected from a choice of modes, uses Galileo authentication to verify that the navigation data received from satellites is genuine. 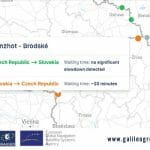 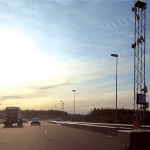 Researchers in the PRoPART project developed a 10-centimeter accurate and robust position determination system for autonomous vehicles, demonstrating a safe merge of a fully automated heavy truck between two cars driving at speed in an adjacent lane. 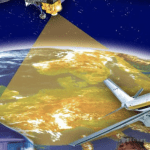 Contract to Plan Next Phase of EGNOS Evolution 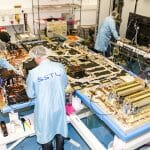 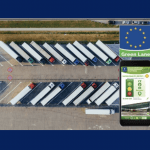 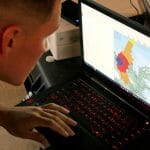 Experts at the NATO Communications and Information (NCI) Agency have developed a software-based tool that can estimate the area where an interfering signal would degrade or deny GNSS signals, and assess the scale of the interfering signal and its potential impact on operations. Principally of interest are jamming or spoofing attacks on GPS or Galileo, of course.

The Radar Electromagnetic and Communication Coverage Tool (REACT), was sponsored by the NATO Navigation and Identification Programme of Work. It serves as a proof-of-concept of how analytical tools could support the execution of operations. The tool is also available to NATO Nations free of charge. For now, the software is only used for trial and experimentation.

To use the software, operators input information on the particular jammers – their locations and technical characteristics — and the software produces a map of the area where the interfering signals would degrade or deny GNSS receivers. This can be displayed on the NATO Core Geographical Information System (GIS) map.

The next phase of the project focuses on ensuring the software can work on NATO classified networks, which would make it more available to operational commands to test and ensure such support measures are properly integrated into NATO operations.

The software and its estimations were demonstrated to operators during exercise Trident Jupiter 2019, part 1, to collect their feedback. The exercise gathered 3,000 military and civilian personnel as participants, evaluators and observers. Thirty NATO member and partner nations participated in nine different exercise locations across Europe.

TRJU19 was the largest and most complex exercise planned and executed by the Alliance’s Joint Warfare Centre to date. TRJU19-2 took place in March 2020.

“NATO’s adversaries have the ability to degrade or deny GPS-enabled capabilities,” said Jean-Philippe Saulay, a NATO Navigation and Identification Officer. “NATO must take appropriate measures to ensure Allied forces can operate in a degraded or denied environment.” 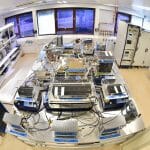 Hidden Siblings of the GNSS

GPS keeps a digital twin sequestered in El Segundo, California. Galileo has an Earth-bound space vehicle in Noordwijk, the Netherlands, straining at its bonds, yearning to break free and fly with its brethren. Both constellation “ghosts” exist in an eerie testing twilight, being made to replicate the movements and reactions of their free-flying families. Their sacrifices could lead to better, more robust satellites in future generations.