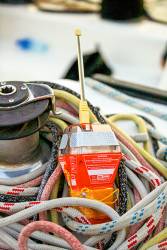 The GSA, along with the European Commission (EC), invites all eCall device manufacturers, such as tier-1 suppliers, to participate and assess their devices’ capability to support the reception and processing of the Galileo and EGNOS signals. (For a full list of technical services by EU country, click here).

The testing initiative follows the January 17, 2017 publishing of European Commission Delegated Regulation (EU) 2017/79. According to the regulation, all new M1 (passenger cars) and N1 (light duty vehicles) types must be equipped with eCall in-vehicle systems as of March 31, 2018.

In the event of a serious accident in vehicles equipped with the technology, eCall automatically dials 112 —  Europe’s single emergency number. On February 11, the European Union (EU) celebrated 112 Day in recognition of the success of the emergency phone number system that uses Advanced Mobile Location (AML) to receive location information from mobile phones.

The test campaign, being conducted in cooperation with the European Commission’s Joint Research Centre (JRC), aims to pre-test eCall in-vehicle models and evaluate their compatibility with the positioning services provided by Galileo and EGNOS in accordance with the test procedures established by the Regulation. Among other things, the tests will assess:
•    positioning accuracy under different conditions
•    time-to-first-fix
•    GNSS receiver sensitivity
•    re-acquisition performance following signal outages

All tests will be held at the JRC’s state-of-the-art Galileo and EGNOS facilities in Ispra, Italy.
Manufacturers are encouraged to take advantage of this free, voluntary basis opportunity to support their preparation for type approval. All results will be kept confidential and covered by individual non-disclosure agreements. For more information, contact the GSA Market Development Department (market@gsa.europa.eu) no later than April 14, 2017.

More EGNOS, GSA News
At the beginning of this year the EC launched the SEASOLAS project to study what an EGNOS Maritime Safety Service should provide, based on new shipborne receivers that utilize EGNOS Dual Frequency GPS/Galileo capability.

To prepare for this next EGNOS Maritime Safety Service, GSA in collaboration with the EC is seeking general feedback from users and, specifically, insight on the experiences of the maritime community.

For several years, the maritime community has been using EGNOS without standardized EGNOS receivers or a dedicated EGNOS maritime safety service, the GSA said. Instead, maritime users have used the EGNOS Open Service.

Although the Open Service provides timing and positioning services, it lacks specific receiver certification and, consequently, does not come with specific guarantees for use in safety-critical maritime applications.

EGNOS has the potential to provide positioning performance better tailored to the unique needs of the maritime community. This potential will be reached once the new version of EGNOS (EGNOS V3) is operational and able to augment Galileo, thereby providing higher accuracy and higher availability than what EGNOS can currently deliver.

The SEASOLAS service can be tailored to a new integrity information concept at the user level based on the requirements of the maritime community. The project is consulting with maritime users to determine what new concepts of operation require safe and guaranteed navigation performance at the user level (with a special focus on port operations and navigation in inland waterways).

The findings will determine which EGNOS information is required to enable these operations to utilize a satellite-based augmentation system (SBAS).

SEASOLAS is fully financed by the EC under the Horizon 2020 program for research and innovation and within the allocated budget for the evolution of the EGNOS mission. The EC’s Directorate-General for Internal Market, Industry, Entrepreneurship and SMEs (DG-GROW) has appointed GMV, supported by Valdani Vicari & Associati, Kongsberg Seatex, European Satellite Services Provider, and General Lighthouse Authority for the UK and Ireland, to perform the study. The GSA is providing technical supervision on behalf of the EC.

The project will last 18 months, and the results of the study, which will be available by mid-2018, will directly feed discussions on the evolution of the EGNOS mission. According to a GSA press release, the main interrelated steps of the study cover: analysis of the maritime domain; GNSS technical analysis; GNSS requirements definition; and definition of the service roadmap.