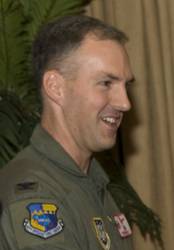 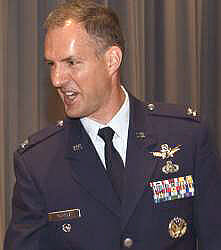 Col. Bernard Gruber, currently the commander of the 45th Space Wing Operations Group at Patrick Air Force Base, Florida, will take over direction of the GPS Wing later this year.

Col. Bernard Gruber, currently the commander of the 45th Space Wing Operations Group at Patrick Air Force Base, Florida, will take over direction of the GPS Wing later this year.

Gruber served at the wing’s predecessor organization, the NAVSTAR GPS Joint Program Office (GPS JPO) in the early 1990s, where he was involved with user equipment acquisition including the Selective Availability Anti-Spoofing Module (SAASM) procurement. He will replace Col. David Madden, probably by the summer. Gruber received his appointment as colonel in January 2006.

Several aspects of Gruber’s background suggest that a change in perspective and style could accompany his tenure at the key acquisition organization for the Global Positioning System.

One U.S. Air Force officer pointed out that Gruber is a qualified Joint Specialty Officer, which is unusual for an acquisition officer. That means he is “particularly trained in, and oriented toward, joint matters, typically joint war-fighting matters,” according to the source.

Indeed, a 2007 thesis written for the Air University, “Streamlining the Acquisition Process: A Strategic View on Behalf of the Warfighter,” leans heavily on the “joint” perspective in combination with proposing greater emphasis for drawing on combatant commands (COCOMs) — as the ultimate Department of Defense (DoD) customer — for input into the requirements-setting process for new equipment.

In interviews with COCOM leaders, Gruber found a “central and recurring theme” to be “the perceived failure to address overall needs coupled with a chronic under funding for joint programs.”

Restoring Joint Program Status
That perspective could dovetail closely with a discussion now under way to consider restoring the joint program status to the GPS organization at Los Angeles Air Force Base Space and Missile Systems Center.

Dissatisfaction has been heard from other military branches as well as civil agencies about the transformation of the GPS JPO into an Air Force organization, not only because it seemed to downplay the role of other user communities but also because the wing designation is usually applied to operational commands not acquisition organizations.

Perhaps reflecting his GPS JPO experience, Gruber’s thesis ties space acquisition programs to the greater subject of military acquisition overall for three reasons: [F]irst, Congress has little faith in DoD’s ability to manage them; space programs have been plagued with issues,” he wrote.

So, he concluded, “reliance on space will exponentially grow for domestic, international, military and civilian users.” Some industry observers have noted an attenuated relationship between the wing and commercial GPS manufacturers and civilian end users during Madden’s tenure.

Gruber’s experience at Patrick AFB may also have timely application to his upcoming responsibilities. The 45th Space Wing processes satellites, including GPS spacecraft, for launch at Cape Canaveral. The operations group, which Gruber has commanded since July 2007, maintains the Eastern Range assets and is responsible for airfield operations, weather, and communication support.

West Coast Launch Site
Another topic of discussion taking place within the GPS community is the idea of re-establishing a West Coast launch site for GPS in part to alleviate a crowded launch manifest at Cape Canaveral. The first generation of GPS satellites (Block I) were launched from Vandenberg Air Force Base — 10 spacecraft were sent into orbit from the coastal California facility between 1978 and 1985.

Gruber was a military fellow at the Center for Strategic and International Studies in 2006–7. His 2007 fellowship thesis completed at the Air University, explored how the Department of Defense can have a streamlined and flexible acquisition process in a fiscally constrained and complex security environment that directly benefits the needs of the warfighter.”

Although the perspective of his thesis was agency-wide in scope, some of the principles and issues that he raised could indicate areas of emphasis in his new command.

A Break with TSPR Acquisition Reform?

Clearly, Gruber is on board with the move away from the so-called acquisition reform implemented during the leadership of Darleen Druyun, until 2003 the principal deputy assistant secretary for Air Force acquisition and management, which sought to shift responsibility for engineering and delivering new systems from DoD and support organizations to the private sector.

“The last strategic acquisition reform effort that the department attempted encompassed outsourcing, privatizing and a concept of total system performance responsibility (TSPR) did not pan out,” Gruber wrote. The troubled and long-delayed Block IIF satellites were procured during the TSPR era.

“The TSPR concept did not produce the efficiencies envisioned, especially for long-term solvency,” Gruber added. “Government labs, federally-funded research and development centers (FFRDCs), the nation’s inhouse technical expertise, wilted on the vine. This expertise needs rebuilding. Basic R&D back in government hands provides unambiguous intellectual property rights, shifting R&D away from for-profit companies that are incentivized to stretch programs out.”

Among the recommendations that Gruber proposed in the document was “to place the user, Combatant Commands, squarely in a demand function, a function that does not effectively exist today” and to develop “a synchronized timeline to field weapon systems on behalf of the user, not a timeline that is behest of the supplying provider.”

“Providing an organization like JFCOM (Joint Forces Command) to act on behalf of all the COCOMs for short-term solutions makes sense, complementing their efforts with a strong DDR&E (Director, Development, Research and Engineering) makes even more sense for ensuring programs ultimately meet the needs of the future joint warfighter,” Gruber wrote.

He also recommended restoration of the role of materiel commanders with acquisition authority as well as programming, budgeting, and execution authorities. Currently, weapon system budgets and milestone authorities are through the Office of the Secretary of Defense (OSD), which Gruber suggested should “refocus on policy formulation and oversight, not program management, to ensure it does not take on responsibilities for which it is ill-suited.”

He also recommended establishment of a principle director, second only to the under secretary of defense for acquisition, technology and logistics (USD/AT&L), as the DoD weapon systems architect.