At ENC 2014: A GNSS Wake Up Call for Europe - Inside GNSS - Global Navigation Satellite Systems Engineering, Policy, and Design 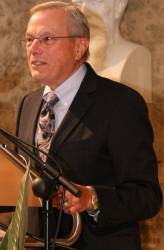 Among the key topics to come out of this year’s European Navigation Conference (ENC 2014) in Rotterdam is how safe — or unsafe — we really are, and who in Europe cares. The answer is, a lot of people care, but almost no one can do anything about it.

Professor David Last, strategic advisor at the General Lighthouse Authorities of the UK & Ireland, made the case before the conference had even started, at the pre-conference “Resilient PNT Forum.”

Among the key topics to come out of this year’s European Navigation Conference (ENC 2014) in Rotterdam is how safe — or unsafe — we really are, and who in Europe cares. The answer is, a lot of people care, but almost no one can do anything about it.

Professor David Last, strategic advisor at the General Lighthouse Authorities of the UK & Ireland, made the case before the conference had even started, at the pre-conference “Resilient PNT Forum.”

Speaking about the maritime navigation sector in particular, he said, “GPS is now widely seen as the sole necessary navigation solution. And we have seen the demise of many traditional and even more recent backup systems. In fact, virtually all other means of navigation have been replaced by GPS.”

GPS is in so many onboard systems, he said, that the people who run ships today aren’t even aware of what all can go wrong when GPS drops out.

“Satellites can fail,” said Last. “Solar flares can swamp the system. And there is intentional jamming.”

With a simple multi-frequency jammer, now easily available, one person can knock out all L1 to L5 bands, meaning GPS, WAAS, Galileo, EGNOS, etc. etc. The proposed Galileo PRS, and other military or regulated services, may be more robust, but they will not be immune.

No less than the venerable Bradford Parkinson, founding director of the U.S. GPS program, took up the call in his keynote speech to the ENC GNSS conference, laying out his plan to “Protect, Toughen, and Augment” GNSS.

“Yes, that’s PTA,” he said, “and it’s not the Parent Teacher Association.”

Parkinson outlined a number of steps that he believes can and need to be taken in order to reduce the risk of catastrophic GNSS failure. Resilient PNT, he said, means not a single system; it means complementary but dissimilar systems. eLoran seems to be one choice favored by a number of experts, at least for maritime navigation, although getting it through the heads of government officials has been like driving a toothpick through solid steel.

Erik Theunissen, from the Netherlands Defence Academy, eliminated any remaining shred of hope during his conference presentation entitled ‘So you think you are safe’. “Having become so dependent on GNSS, can we now afford a loss of integrity?” he asked.

Theunissen presented a fascinating comparison of the Internet and GNSS. There once was a time when the Internet was young and everybody thought it was great and no one thought anything could ever go wrong. Then came the first high-profile hacking incidents. Then came deliberate attacks. And despite all our efforts, they have never stopped. Today, denial of service events on the Internet are more common than ever.

Can we afford a full-blown denial of service event with GNSS? We have already seen natural interference and both incidental and deliberate jamming events with potentially catastrophic outcomes, such the Newark airport case a couple of years ago and the recent jamming of South Korean maritime navigation systems by North Korea.

Such events are still increasing, Theunissen argued. How long before organized nefarious groups — or just a bunch of thrill seeking 15-year-olds — realize just how much damage they can do with a coordinated jamming and/or spoofing campaign directed at one of the most widespread, fundamental, and, yes, highly vulnerable global infrastructures?

One comes away believing not only that it could happen but that it absolutely is certain to happen.

This Is Not Going to Go Away
Back at the Resilient PNT Forum, Dana Goward of the Resilient Navigation and Timing Foundation, argued that what was going on in that little room in Rotterdam was basically a lot of preaching to the converted. The real audience has to be the people who can do something about it. That is politicians, governments.

Refaat Rashad of the Arab Institute of Navigation agreed: “We are talking to each other,” he said. “The people who need to know are not here. Why don’t we invite decision makers to forums like these?”

Discussing one test case where a simple jammer on a Dover cliff top caused disruption 30 kilometers out into the Dover Straight, one of the busiest sea lanes in the world, Last insisted that the system is vulnerable, but who in Europe is responsible? No one.

“There is no European radionavigation plan,” Last said. “Who needs it?” mocking the powers that be. “We have EGNOS!”

The people who should be in charge, namely the European Union (EU) and specifically the European Commission, but also including every European national government, simply do not recognize how important PNT has become. There is clearly an inability to understand the problem.

“Is there a GNSS vulnerability plan anywhere in Europe?” he asked. By then, everyone listening knew the answer.

One of the reasons for the apparent paralysis is certainly the sheer size of the problem. Even on the users’ side, where does responsibility lie for a technology that spans our entire socioeconomic life? The forum drew mostly veterans of maritime navigation, and a few aviators, but it could easily have been organized by bankers. From transport to agriculture, search and rescue, energy, telecoms, and world finance, who is really in a position to take up and own the problem of GNSS vulnerability?

In fact, the forum organizers told Inside GNSS that the European Space Agency and the European Commission both were invited and both declined to join the discussion. Shocking? we asked.

“Perhaps shocking,” said Nick Ward of the UK’s General Lighthouse Authorities, “but not surprising. They are about telling their story; they are not about addressing this issue.”

Both Ward and Parkinson were apt to give the EU authorities the benefit of the doubt, just barely. “I suppose they have other things on their mind,” Parkinson said, “like getting Galileo off the ground.”

“When you listen to the Commission,” observed Last, “all the speakers we’ve heard so far at this conference, it’s all about progress being made on Galileo and EGNOS.”

Still, the basic vulnerability of GNSS and all that it feeds will not be affected by the addition of a new fully operational GNSS, however proud it may make Europeans feel.

Goward referenced the recent tragic mudslide in Washington state, which, apparently, experts had predicted would happen. The problem was the experts had not been able to convince anyone with the power to do something about it before it was too late. People had to die before the decision makers woke up.

Here’s to hoping Europe (and the rest of the world) wakes up before it’s too late.