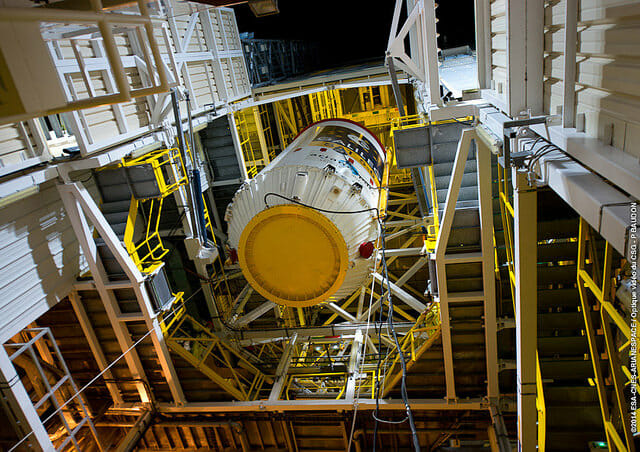 In a report issued Tuesday (October 7, 2014), an Independent Inquiry Board formed to analyze the cause of the August 22 launch anomaly that placed two Galileo into the wrong orbits has concluded that frozen fuel lines caused a misfiring of attitude control thrusters on the launcher’s Fregat module.

According to the report, the problem can be remedied on the rockets in time for another launch in December, much sooner than some observers had speculated.

In a report issued Tuesday (October 7, 2014), an Independent Inquiry Board formed to analyze the cause of the August 22 launch anomaly that placed two Galileo into the wrong orbits has concluded that frozen fuel lines caused a misfiring of attitude control thrusters on the launcher’s Fregat module.

According to the report, the problem can be remedied on the rockets in time for another launch in December, much sooner than some observers had speculated.

The Board was set up on August 25 by Arianespace, which has the contract for Galileo launches from the European spaceport in Kourou, French Guiana, in conjunction with the European Space Agency (ESA) and the European Commission. Chaired by Peter Dubock, former ESA inspector-general, the panel announced its definitive conclusions following a meeting at Arianespace headquarters in Evry, near Paris, France.

The inquiry drew on data supplied by Russian partners in the program and are consistent with the final conclusions of a separate inquiry board appointed by the Russian space agency Roscosmos.

The board’s conclusions confirm that the first part of the mission proceeded nominally, which means that the three-stage Soyuz launcher was not at fault.

The inquiry board also eliminated the hypothesis that the anomaly could have been caused by the abnormal behavior of the Galileo satellites.

The problem arose during the flight of the launcher’s fourth stage, Fregat, designed and produced by NPO Lavochkin. According to the board’s statement, the anomaly occurred about 35 minutes after liftoff, at the beginning of the ballistic phase preceding the second ignition of the Fregat stage.

As reconstructed by the investigation, the scenario that led to an anomaly was as follows:

• The orbital error resulted from an error in the thrust orientation of the main engine on the Fregat stage during its second powered phase.
• This orientation error was the result of the loss of inertial reference for the stage.
• This loss occurred when the stage’s inertial system operated outside its authorized operating envelope, an excursion that was caused by the failure of two of Fregat’s attitude control thrusters during the preceding ballistic phase.
• This failure was due to a temporary interruption of the joint hydrazine propellant supply to these thrusters.
• The interruption in the flow was caused by freezing of the hydrazine.
• The freezing resulted from the proximity of hydrazine and cold helium feed lines, these lines being connected by the same support structure, which acted as a thermal bridge.
• Ambiguities in the design documents allowed the installation of this type of thermal "bridge" between the two lines. In fact, such bridges have also been seen on other Fregat stages now under production at NPO Lavochkin.
• The design ambiguity is the result of not taking into account the relevant thermal transfers during the thermal analyses of the stage system design.
The root cause of the anomaly on flight VS09 is therefore a shortcoming in the system thermal analysis performed during stage design, and not an operator error during stage assembly, the board concluded.

Thermal analyses of the system have been reexamined in depth to identify all areas concerned by this issue. Given this design fault, the Board has chosen the following corrective actions for the return to flight:
• revamp of the system thermal analysis.
• associated corrections in the design documents.
• modification of the documents for the manufacture, assembly, integration, and inspection procedures of the supply lines.
The report indicated that NPO Lavochkin can apply these measures easily and immediately to the stages already produced.

Beyond theses corrective actions, NPO Lavotchkin will provide Arianespace with all useful information regarding Fregat’s design robustness, which had recorded 45 successful consecutive missions before this anomaly.

Following the announcement of the board’s conclusions, Stéphane Israël, chairman and CEO of Arianespace, thanked Dubock and the board whose work with the support of Russian partners, he said had “enabled the rapid identification of the root cause of the anomaly and the corrective measures to be applied.

“Since the corrective measures are easy to deploy by NPO Lavochkin,” Israël added, “we are looking at the resumption of Soyuz launches from the Guiana Space Center, as early as December 2014."