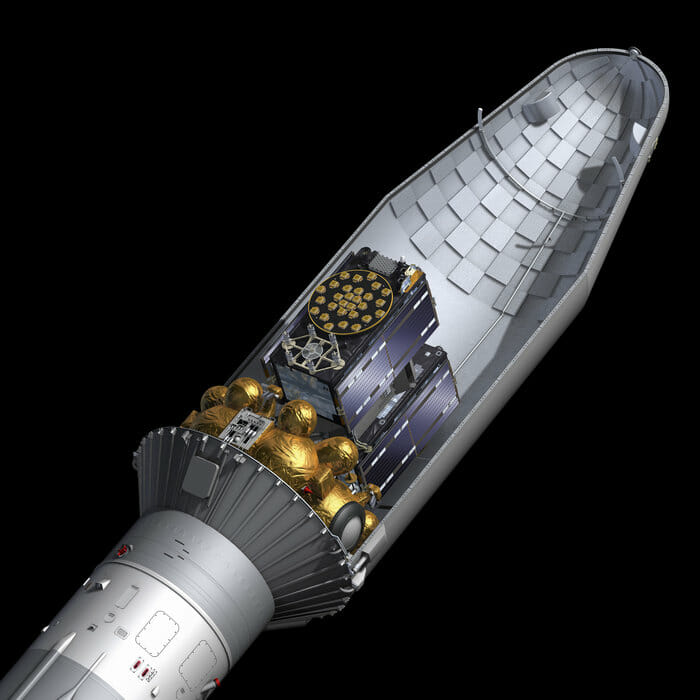 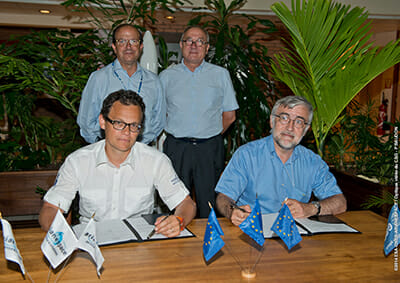 [Updated Ausut 26, 2014) Sources in Brussels say that the two Galileo satellites launched on Friday (August 22, 2014) will likely never reach their proper orbits, and the failure will mean new delays for the Galileo program, as Soyuz launches will be frozen until an investigation is performed and causes identified. Meanwhile, the European Commission (EC), European Space Agency (ESA), and launch contractor Arianespace will take part in a board of inquiry into the flawed launch.

[Updated Ausut 26, 2014) Sources in Brussels say that the two Galileo satellites launched on Friday (August 22, 2014) will likely never reach their proper orbits, and the failure will mean new delays for the Galileo program, as Soyuz launches will be frozen until an investigation is performed and causes identified. Meanwhile, the European Commission (EC), European Space Agency (ESA), and launch contractor Arianespace will take part in a board of inquiry into the flawed launch.

One knowledgable source explained, "Investigations and corrective actions, if required, usually take no less than six months. So, I would be surprised of another launch before March-April next year."

Late Friday, Arianespace confirmed that the two Galileo navigation satellites had been released into the wrong orbit. The targeted orbit was circular, inclined at 55 degrees with a semi major axis of 29,900 kilometers. The satellites are now in an elliptical orbit, with excentricity of 0.23, a semi-major axis of 26,200 kilometers and inclined at 49.8 degrees, according to Arianespace.

According to initial information from Arianespace, the problem involved the upper stage of the launcher, as a result of which the satellites were not injected into the required orbit.

Speculation immediately turned to whether the two satellites might have enough fuel to make up for the orbit injection error. Now, sources in Brussels say that even using all the propellant available onboard the satellites, it is going to be “very difficult,” probably impossible, to boost the satellites into the right orbit.

Despite the non-nominal orbit, the satellites are safely under control after they were released from the launcher upper stage, according to ESA, and the European ground teams deployed at the ESOC in Darmstadt, Germany, determined the spacecrafts orbital positions.

Controllers there, in cooperation with the satellite manufacturer OHB, confirm the good health and the nominal behavior of both satellites. A procedure to deploy the solar arrays that had remained folded on both satellites was successfully executed on the first satellite in the course of Monday (August 25, 2014) night. A similar procedure will be executed soon on the second satellite.

Both satellites continue to be kept in a safe state, correctly pointing to the Sun, properly powered and fully under control of the ESA/CNES integrated team and the teams of OHB deployed at ESA’s control center.

In parallel, the teams are investigating the possibilities to exploit the satellites to their best despite the non-nominal injection orbit and within the limited propulsion capabilities of the satellites, ESA officials say.

Arianespace Sets Up Board of Inquiry
The European Commission (EC) has requested Arianespace and the European
Space Agency (ESA) to provide full details of the incident, together
with a schedule and an action plan to rectify the problem.

To maintain links with the Russian partners in the Soyuz at CSG program, the head of the Russian space agency Roscosmos, on request from the head of Arianespace, has designated Alexander Daniliuk, deputy director-general of TsNIImash, as board liaison.

In a press statement, the EC said the board of inquiry set up to identify the causes of the problem is expected to present preliminary results in the first half of September. The board will propose place corrective measures at the level of Arianespace to avoid such incidents being repeated with future launches.

ESA has informed the commission that its Control Center in Darmstadt (Germany) has the satellites under control, although they are not placed in their intended orbital position. The EC says it is working in close cooperation with ESA "to maximise the possibilities of using the two satellites as part of the Galileo network."

The commission has set up an internal task force to monitor the situation, working in close contact with ESA and Arianespace. Both ESA and Arianespace have been invited to Brussels to present the initial results of their inquiry to European Commissioner for Industry and Entrepreneurship Ferdinando Nelli Feroci during the first week of September

Studies and data analyses are continuing in Kourou, French Guiana, and at Arianespace headquarters, in conjunction with the Russian partners in the Soyuz in French Guiana program (Russian space agency Roscomos and the manufacturers RKTs-Progress and NPO Lavotchkine), as well as ESA and its industrial partners, to determine the scope of the anomaly and its impact on the mission.

According to the initial analyses, the anomaly is thought to have occurred during the flight phase involving the Fregat upper stage, causing the satellites to be injected into a noncompliant orbit.

"Our aim is of course to fully understand this anomaly," said Stéphane Israël, chairman and CEO of Arianespace. "Everybody at Arianespace is totally focused on meeting this objective. Starting Monday, Arianespace, in association with ESA and the European Commission, will designate an independent inquiry board to determine the exact causes of this anomaly and to draw conclusions and develop corrective actions that will allow us to resume launches of Soyuz from the Guiana Space Center (CSG) in complete safety and as quickly as possible. The board will coordinate its work with Russian partners in the Soyuz at CSG program."

Israël continued, "Arianespace is determined to help meet the European Union’s goals for the Galileo program without undue delay. We would like to thank ESA, the European Commission and CNES for the very productive discussions since becoming aware of the occurrence of the anomaly. While it is too early to determine the exact causes, we would like to offer our sincere excuses to ESA and the European Commission for this orbital injection that did not meet expectations."

New Contract for Launches
Another Arianespace Soyuz rocket, designated VS10, had also been scheduled to launch the second set of Galileo FOCs from the Guiana Space Center in December, a date delayed from November. Beginning next year, plans call for using Ariane 5 ES launch vehicles, each carrying four Galileo FOC satellites.

On Thursday (August 20, 2014) Arianespace and ESA, acting on behalf of the European Commission, signed a contract at the Guiana Space Center, European spaceport, for three launch services with Ariane 5 ES in order to step up the deployment of Galileo.

Let the Blame Games Begin
The European Union and, in particular, the European Commission are going to have a hard time deflecting the new criticism already being flung about in the wake of this new mishap.

Only a few weeks ago, news came of the removal from service of a Galileo in-orbit validation (IOV) satellite, GSAT0104/FM-1, due to a power loss. Now it seems almost certain the promised initial Galileo services, delayed this year to the beginning of 2015, will have to be postponed again, with all new satellite launches likely to be on hold until the Soyuz investigation runs its course.

Although the cause of FM-1’s failure remains undetermined, a recent report in Space News quoted Javier Benedicto, ESA’s Galileo program manager, as saying that Galileo controllers have reduced the transmission power on all four IOV spacecraft in an effort to reduce the risk of further failures. Other IOV satellites have also experienced problems with transmitter power levels. GSAT0104/FM-1 remains offline.

Initial Galileo Services Delay Likely
Speaking earlier this year, ESA Director General Jean-Jacques Dordain outlined what was needed to get initial Galileo services off the ground: “With two more [Galileo satellites] launched in June, the GSA has indicated to us that they can already begin to ‘qualify’ the signal for early services.”

The June launch he referred to was the one that actually took place on Friday. It was late because of Arianespace scheduling issues related to its automated transfer vehicle (ATV) launches to support the International Space Station.

Dordain continued, “With two more in October, making eight in total, they GSA can complete the qualification. With the next two in December, they should be able to deliver the early services as announced.”

Now, with a new setback and many questions to be answered, even a single additional launch this year seems unlikely, pushing initial Galileo services further into 2015 at best.

Arianespace has final authority for Soyuz missions launching from the spaceport near Kourou, French Guiana, although Russian ground crews manage the launch preparations and the final countdown. So, the responsibility for the launch failure falls on Ariannespace, say our sources. And while this is certainly correct, taxpayers are going to look to the EU for answers.

EU Officials Remain Calm
EC Commissioner Feroci said, "The European Commission will participate in an inquiry with ESA to understand the causes of the incident and to verify the extent to which the two satellites could be used for the Galileo program. I remain convinced of the strategic importance of Galileo, and I am confident that the deployment of the constellation of satellites will continue as planned."

Antonio Tajani, former EC Vice-President and now European Parliament Vice-President, in a statement released just after the launch but before the “anomaly” was announced, said, "I heard with great satisfaction the news about the launch of the fifth and sixth satellites of the Galileo constellation.”

Indeed, the Galileo and Copernicus programs were among Tajani’s main responsibilities at the Commission.

“As Vice-President of the European Parliament,” he continued, “I will keep my engagement and support for these two programs, being strongly convinced that space activities can play an important role in the full recovery of the economy in Europe."

It is likely that the Parliament, at least, with impetus from members like Tajani, one of the only Galileo-linked figures currently enjoying a level of public support, will continue to provide key backing to the Galileo program.

But all parties will now be buckling their seat belts, as the wave of new criticism and recriminations may begin to resemble a tsunami in the coming days.

We know that launch failures can happen. This is, after all, the space business.

Although failed orbital insertions are not uncommon, especially with high-altitude geostationary spacecraft, this has rarely happened with middle-Earth-orbit (MEO) satellites.

GPS has had two outright launch failures in 1981 and 1997 in which the rocket and satellite were destroyed by range safety personnel following problems early in the launch cycle. GLONASS has had a number of launch failures, but only two instances — in 1987 and 1988 — in which satellites failed to reach their intended orbits. China’s BeiDou system has experienced control difficulties with its second geostationary satellite launched in April 2009, which is drifting in orbit.

In July 2001, a failure in the upper stage of an Ariane 5 launcher placed ESA’s $850-million Artemis communications and navigation satellite — at the time  the most expensive ESA satellite ever launched — and Japan’s BSAT-2B commercial communications satellite into a 17,528-kilometer (11,000-mile), about half the intended altitude. Another Ariane 5 failed to place its payload into the correct orbit in 1997.

But as the string of Galileo delays and failures gets ever longer, the credibility of the European space business is suddenly looking more vulnerable than ever.