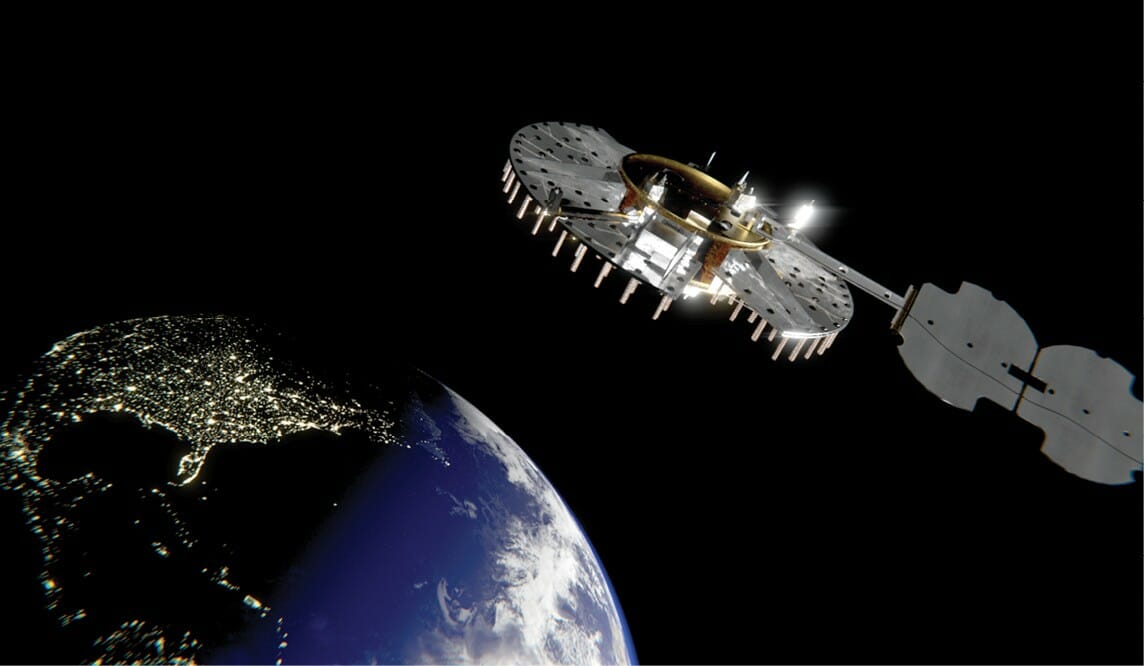 Among the innovations: a reprogrammable signal generator, an electronically scanned array, flexible and secure signals, increased automation, and use of commercial command and control assets. These will form stepping stones to future GPS constellations.

The U.S. Air Force’s GPS constellation was created to provide unprecedented position and timing accuracy for the U.S. Department of Defense (DoD). Since the inception of GPS, it has become a global utility with commercial use far outweighing military use. Applications such as air traffic control, banking, farming, search-and-rescue, and cellular networks all depend on uninterrupted GPS coverage. At the same time, the space domain is becoming increasingly congested and competitive with the addition of other satellite navigation constellations such as Galileo, BeiDou, and GLONASS. In addition, regional systems such as QZSS and NAVIC are being fielded. Despite a plethora of global and regional satellite navigation (satnav) constellations, other countries such as South Korea and the United Kingdom have expressed interest in fielding their own satnav constellations.

In order for GPS to remain at the forefront of innovation for satnav systems and provide advanced capabilties required of future scenarios, new technologies need to be matured and transitioned. With these goals in mind, Navigation Technology Satellite–3 (NTS-3) was proposed as a revolutionary flight experiment to mature and develop new technologies that can transition to next generation U.S. space-based PNT satellites. NTS-3 will push the boundary of today’s satnav technology to meet the technical challenges of tomorrow in this new space and global environment.

REVOLUTIONARY TECHNOLOGIES. NTS-3 will demonstrate how a reprogrammable satnav enterprise functions across space, ground, and user segments and will develop and mature technologies to meet future needs of military and civilian users. Across the domain, NTS-3 experimentation will include revolutionary technologies like an on-orbit reprogrammable PNT payload, an electronically scanned array providing both earth and regional coverage, agile signals for improved security and interference mitigation, and a time-keeping system with diverse timing sources for improved mission stability, anomaly detection, and enhanced error mitigation techniques.

NTS-3 will further experiment with increased automation of the ground control system, minimizing the need for intensive human interaction, and augment Air Force resources with commercial antennas to enhance Air Force command and control capabilities. Near real-time error detection and mitigation are key capabilities, with new waveforms at the center of the experimental campaign. Systems will automatically monitor essential parameters and look to mitigate errors to maintain integrity and accuracy with minimal human intervention, in order to avoid lengthy service interruptions that have been seen previously in both GPS and other satnav constellations. User equipment will work seamlessly with space assets to adapt to broadcasts of new waveforms and bring the flexibility and agility of software defined receivers to the military PNT community.

EPIC SPEED. The defense space enterprise is undergoing a rapid transformation in how it develops and acquires space capabilities. Recognizing that space is no longer uncontested, the new emphasis is on “epic speed” to meet future needs of space systems. Supporting this new emphasis, the United States Space Force (USSF) has identified three Space Enterprise Capability Needs. These Enterprise Needs are:

NTS-3 is a key element of demonstrating these Enterprise Needs for a space-based PNT system. As such, NTS-3 was designated a Vanguard program by the U.S. Air Force in August 2019. 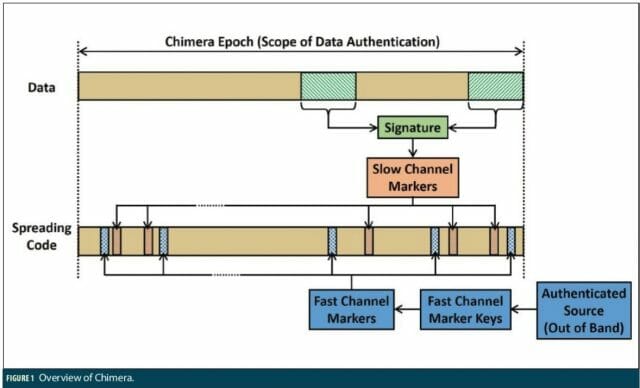 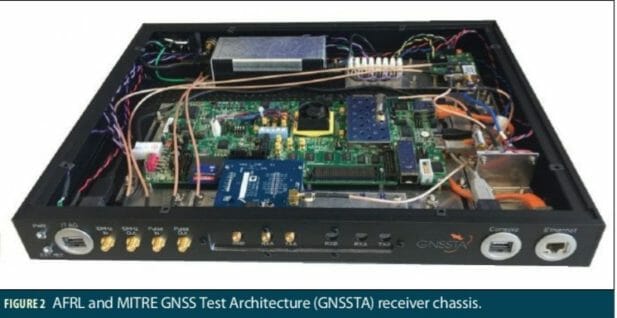 The original GPS signals, designed from 1973-1978, were a marvel in their time. Incorporating direct-sequence spread-spectrum, Code Division Multiple Access (CDMA), and a compact data message, these signals have served both military and civil users for three decades and are still in use by all Department of Defense (DoD) users.

Despite the elegance and reliability of the GPS signals, the exponential growth of GPS use after its Initial Operational Capability (IOC) in 1993 revealed several shortcomings. By presidential decree, the DoD was directed to address these shortcomings in 1996, yielding the GPS Modernization Program. From 1997 to 2004, the Air Force developed four new satnav signals, one military and three civil signals (M, L2C, L1C, and L5).

M-Code has been deployed on 21 satellites, while delivery of the ground control and user segments is ongoing. Although M-Code provides significant improvements over the legacy signals, its complexity and improved security have slowed deployment, especially for the user segment. Meanwhile, the challenges driving GPS performance and reliability and the solutions available to address those challenges have continued to evolve, necessitating new technologies to be matured and fielded.

One purpose of NTS-3 is to demonstrate an agile response to unplanned contingencies by adding on-orbit reprogrammability to the space segment. To keep pace with emerging technologies and future uses of space-based PNT systems, new satnav signals are being developed for testing on NTS-3. Acquisition aiding, signal authentication, agile waveforms, and flexible channelization are a few of the signal capabilities planned for testing on NTS-3.

NTS-3 will focus on providing a military assisted-GPS service comparable to that enjoyed by civil mobile users today but designed for the unique demands of the military environment. By providing an acquisition aid and constellation navigation data, NTS-3 will enable faster time-to-first-fix in jamming while increasing the anti-jam performance for military receivers.

As another anti-jam performance enhancement, NTS-3 will implement Long Term Orbit and Clock (LTOC) data for the military community. The two largest error sources for all satnav systems are ephemeris predictions and clock performance over time. Providing this data via alternative methods will enable user equipment to operate for longer periods with the receiver in State 3 (tracking but not demodulating data) and enables higher anti-jam performance with lower user equipment power.

One method for providing this data is via a geosynchronous (GEO) augmentation layer—such as NTS-3 is demonstrating—which allows the user equipment to maintain good estimates of the satellites’ positions and timing offsets leading to improved accuracy over longer time durations.

Additional considerations are the size of data required to provide this information to receivers. Satellite orbits are generally considered in terms of an X, Y, and Z point in 15-minute intervals. Greater accuracy is achievable with larger data packages, but bandwidth and data storage requirements must be considered. Currently, trades to minimize data size while maximizing benefit to the military community are being explored.

Authentication of GPS signals is a growing problem for both civilian and military users. To address this growing challenge, AFRL has worked with several contributors to develop a new authentication method known as Chips Message Robust Authentication (CHIMERA).

CHIMERA is a GPS signal authentication method that jointly authenticates both the navigation data and spreading code of the L1C signal. CHIMERA uses time-binding, in which the spreading code is punctured by markers that are cryptographically generated using a key derived from the digitally signed navigation message. The navigation message and the spreading code cannot be independently generated. Bit commitment ensures that a spoofer cannot generate the correct markers until after they have been broadcast. Two concurrent variations of L1C CHIMERA have been developed:

• a slow channel for standalone users; and

• a fast channel when other methods with higher bandwidth are available (e.g. network assist).

The basic operation of the CHIMERA enhancement starts with the GPS transmitter digitally signing the data and then generating markers to be inserted as punctures in the spreading code. These markers may be derived from the digital signature (slow case) or keys generated separately (fast case). User equipment can verify the signature using the GPS public certificate verifying both the authenticity of the data and the timing of the signal. Figure 1 gives a general overview of the CHIMERA enhancement.

SDRs, when used across the enterprise for transmitters (space), receivers (user), and monitoring (ground), are a key enabling technology for future satnav systems. The current fixed frequencies and modulations used for GNSS have provided (and will continue to provide for many years) an outstanding PNT service. In the future, however, the need for more rapid deployment of capability and increased responsiveness to threats will require both flexibility and agility across all system segments.

NTS-3 will leverage SDRs to introduce a wide variety of flexible features. Modulation, power, multiplexing, data framing, and data content will all be configurable. Multiple pilot and data channels when combined with the phased array antenna will support simultaneous missions across an area of operations. With NTS-3, the building blocks for flexibility will enable experimentation with new operation concepts and tactics for mitigating negative effects.

Precision timing is a crucial enabling technology for GNSS. The atomic clocks on board NTS-3 will be closely monitored to improve timing accuracy and characterization of clock behavior in space. Moreover, single event upsets, anomaly detection and onboard ensembling will be investigated. Experiments are planned to test new methods for improved reliability and resiliency, for use by future space-based PNT systems.

An electronically scanned array (ESA) is baselined for NTS-3. While ESA technology is not new to space, implementing an ESA for a satnav system introduces complexity that must be addressed due to variable phase centers and group delay. NTS-3 will investigate impacts and explore enhancements with ESAs to broadcast earth coverage and regional signals from the same antenna.

Ground control is critical for the proper functioning of any satnav system. As reprogrammability is introduced, the ground control system must evolve in order to handle this added layer of complexity. NTS-3 will further enhance satnav ground control architectures by increasing the use of automation and autonomy, as well as enabling advanced features such as reprogrammability. The NTS-3 ground control system is compatible with the Enterprise Ground Services (EGS) architecture. Once fully established, EGS will leverage big data and facilitate easier data sharing, situational awareness, and collaboration. This allows old data and platforms to be used for new purposes. NTS-3 is designed to work with both EGS and legacy ground systems. An important aspect of this is incorporating commercial command and control ground sites to increase contact with the satellite.

NTS-3 will push the frontier of satnav technologies to usher in an era of advanced technologies that will enable a future satnav architecture that is more agile and flexible, as well as more robust and resilient. A reprogrammable payload with advanced PNT signals is at the heart of the NTS-3 experiment. Designing a system architecture that can rapidly deploy new capabilities will be the key demonstration of NTS-3 across the space, ground control, and user equipment segments.

David Chapman is a senior systems engineer at ExoAnalytics Solutions, Incorporated with 20 years of science and technology development experience. Previously he was a principal research scientist at the Air Force Research Laboratory Space Vehicles directorate overseeing and directing the PNT portfolio, including being the Principal Investigator for Navigation Technology Satellite – 3. He has a Ph.D. in Materials Science from the University of Utah.

Joanna Hinks is a research engineer at the Air Force Research Laboratory (AFRL) Space Vehicles Directorate, and the Principal Investigator for Navigation Technology Satellite-3. She received her Ph.D. in Mechanical & Aerospace Engineering from Cornell University. Her research interests include GNSS signals, clocks, and algorithms.

Jon Anderson is an ION Fellow and Director at Canyon Consulting. He currently supports AFRL advanced satnav research, including advanced signals, transmitter technology, and system concept development. While active duty in the Air Force, he led M-Code development and military receiver development, and was an actively involved in developing the policy, security, international compatibility, and capabilities of modernized GPS.