While many industries benefit from GNSS, others have not though their need cries out loud.  Manufacturing, indoor transportation and logistics, to name a few. Massachusetts-based Humatics furnishes indoor navigation systems for areas where GNSS technology does not perform well. Its core concept is “constellation” installations of high-frequency radio transmitters to enable centimeter- and millimeter-scale microlocation technology for positioning, navigating and collaborating.

The company’s technology is based on millimeter-scale radio frequency (RF)-based solutions, including ultra-wideband (UWB) technology, and RF-pulse-based transmissions. In 2018, the company acquired 5D Robotics and its subsidiary, Time Domain, a company at the root of the GPS-UWB controversy circa 2002. UWB technology poses significant radio interference threats for GNSS signals.

In a Humatics installation at manufacturer Tata Steel in India, KinetIQ 100 units were used to calculate X-Y position at 2cm accuracy throughout a 400 x 40 meter steel yard. A crane’s position was derived in real-time via two KinetIQ 100 units placed on the bridge, and an additional unit placed on each of the three cranes. Data from each unit was then used to create business rules for stock-in, stock-out and internal mutation, sending work instruction position data to the crane computer’s user interface.

The company has found customers in shipping ports and factories, where humans work alongside cranes, industrial tools, automated guided vehicles (AGVs), and other machines. These businesses often lack consistent location data for their machines and must adopt inflexible routes for their mobile robots.

“One of the holy grails is to have humans and robots share the same space and collaborate, and we’re enabling mobile robots to work in human environments safely and on a large scale,” Mindell says. “We’ve got so much data floating around, but the link between the actual physical world we all inhabit and move around in and the digital world that’s exploding is really still very poor.” 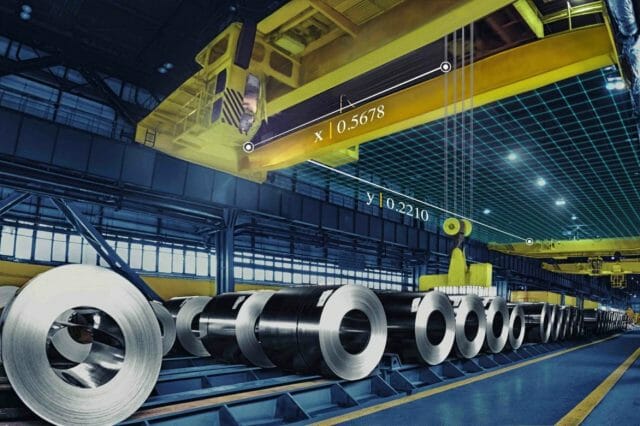 Positioning vehicles and the goods they transport and/or store in the noted environments poses a challenge for other potential location technologies in addition to GNSS.

RFID and Bluetooth, widely used to record assets or good arrivals or check-ins, are weak on positioning in large work environments because of their short ranges and high costs at scale. Cameras and liDAR help machines see their environment but have difficulty with inclement weather and variable lighting conditions.

Humatics beacons can be combined with an onboard navigation hub that helps mobile robots navigate dynamic environments — a failing of magnets-taped-to-the-floor systems, which only work in static environments. Humatics’ system gathers location data from multiple points at once, monitoring the speed of a forklift, helping a crane operator place a shipping crate, and guiding a robot around obstacles simultaneously.

The location and tracking data Humatics systems collect can be integrated into whatever warehouse management system or internet of things (IoT) platforms customers are already using, according to the company.

As a company blog states, “There is plenty of physical infrastructures but not enough software intelligence. The Industry 4.0 movement is about using software to digitize infrastructure. With this movement comes the massive wave of autonomous robots, digitization of shop-floor machinery via the Internet of Things [and more].”

Mindell believes that Industry 4.0 (“the concept of factories in which machines are augmented with wireless connectivity and sensors, connected to a system that can visualize the entire production line and make decisions on its own.” — Wikipedia) leads inexorably to an IoT subset: the Internet of Moving Things (IoMT). Gigantic cargo cranes, forklifts, carts, autonomous robots, and human personnel all interact or interweave on the campus of a port, factory or warehouse. Humatics’ goal is to optimize the supply and storage chain for efficiency, smooth handoffs, and collaboration.

In an installation for New York City’s subway system, a small number of fixed beacons were placed alongside the subway track. As each train travels down its track, it talks to these beacons many times per second to measure its position with centimeter-scale precision — out to thousands of feet. The technology provides precise, real-time information about the position of the trains. Incorporated into the Metro Transit Authority’s signaling system, it enables more trains to travel along the same tracks at the same time — carrying more riders at rush hour without building new subway lines. Using access points in the subway stations, all of the data is piped into the cloud in real time, so analytics of train positions will enable further optimization.