A new tome — make that two new tomes — join the bookshelf of essential and authoritative references for GNSS users, while widening the umbrella a good deal to cover all PNT technologies, their sensors and their integrations. Edited by four leading lights of the community and assistant-edited by two more, its list of authors rounds up another 131 of the “usual suspects,” the names that are seen repeatedly in the presentations at technical conference and on their organizing boards. In every one of 64 subject matters, the author(s) is/are recognized experts, in many cases the recognized expert, on the material. 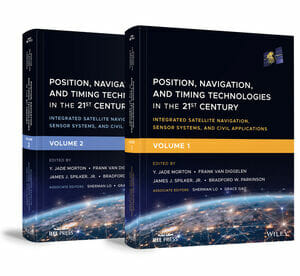 The four primary editors are Y. Jade Morton, University of Colorado at Boulder and current president of the Institute of Navigation; Frank van Diggelen, Google and executive Vice President of ION; James J. Spilker, formerly of Stanford; and Bradford W. Parkinson, Stanford, chief architect for GPS and the first Director of the GPS Joint Program Office.

Assistant editors are Sherman Lo and Grace Gao, both of Stanford.

The book was the brainchild of James Spilker, according to his co-editors. “He remained a fervent supporter until his passing in October 2019. A pioneer of GPS civil signal structure and receiver technologies, Dr. Spilker was truly the inspiration behind this effort.”

In recounting the early history of GPS, Brad Parkinson recalled the most important early studies aimed at selecting the best passive ranging technique for the navigation signal. Experts including Dr. Fran Natali, Dr. Jim Spilker and Dr. Charles Cahn concluded that the best technique was a variation of a new (in the late 1960s) communications modulation known as code division multiple access (CDMA). Cahn advocated a C/A code length of 2047 chips, while Spilker wanted 511. Parkinson split the difference, yielding the code length of 1023 that the world enjoys today.

A lengthier article on this stunning assembly of erudition will appear in the May/June issue of Inside GNSS, with personal perspectives from some of the editors.