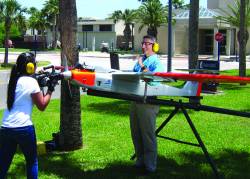 An unmanned aircraft captures attention on the Corpus Christi campus.


1. The Team
Texas A&M University-Corpus Christi leads a largely academic team comprising Texas A&M Engineering Experiment Station (TEES) — which partners with the Corpus Christi campus to support the Lone Star Unmanned Aircraft Systems Center (LSUASC). Texas A&M University-College Station is also part of the cadre as is the Center for Autonomous Vehicles and Sensor Systems (CANVASS), the Southwest Research Institute, the University of Texas at Arlington Research Institute, the Camber Corporation and a number of other research institutions and private-sector organizations.

2. Incentives
The state government offers a range of incentives including tax breaks, expansion and relocation financing, an emerging technology fund that gives grants to both further research and help bring it to market, and the Texas Enterprise Fund to help entice operations to locate in the Lone Star State.

3. Test Ranges
Texas offers 11 test ranges including the airfield complex at the Riverside Campus in Bryan, Texas and the nearby Disaster City test area, the large, Big Bend range near Fort Stockton, the Fort Hood range near Killeen Texas, the Chase Field Range near Beeville and the Chase corridor which stretches 13 miles to the Gulf of Mexico, plus five land and shore sites, including the large TAMUCC maritime range on Padre Island and the adjacent Gulf range, the Dual 1 and 2 site west of TAMU-CC Padre and the Laguna range along Texas’ Laguna Madre. A map of the sites is available at http://lsuasc.tamucc.edu/lsuasc_test_site.php

UPDATE (February 2015): The contact has changed to the following:

With test ranges that literally span sea and shore the Texas team intends to concentrate its unmanned research on applications involving coastal and ocean areas. From tracking marine mammals and monitoring the environment to assessing the condition of drilling platforms, the Lone Star team intends to develop and demonstrate new ways to use unmanned aircraft to benefit seaside communities.

“We have a very strong coastal marine program that has been there for a long time,” said Luis Cifuentes, vice president for research commercialization and outreach at Texas A&M University-Corpus Christi. “That’s our historical strength and we’re simply going to move it into the arena of using unmanned aircraft systems as a remote sensing platform for marine science.”

Sensors will be the team’s focus, Cifuentes told Inside Unmanned Systems. “Our team members are going to be doing a lot of work with geospatial applications—having video cameras, both visible and (ultra violet), and (infrared) detections and other multispectral devices, to be able to look at a variety of different things.”

Unmanned aircraft armed with suites of such sensors could, for example, have a real impact by helping find oil leaks, he said. Once they spot something out of the ordinary, gliders and ships could be guided to the location to investigate further. Team members are also working on the advances in information technology and computer science required to get the information back and forth from these aircraft, said Cifuentes, “so that you cannot only safely operate the system but you can also get the data you need from the system in real-time if it’s critical.”

The state also offers a unique resource for testing UAVs designed for first responders. Disaster City is a made-for-training “urban” area full of simulated rubble and recreated emergencies. Researchers developing autonomous air and ground vehicles can use this world-renown facility, located in College Station, to test their inventions on sets modeled on the damage from real earthquakes, fires and bomb blasts.

Under its agreement with the FAA, the team will gather data during its research flights to support development of safety requirements and the protocols and procedures needed for airworthiness testing. Not all of the research on autonomous vehicles will be useful for setting flight rules though. Cifuentes said the team also will be working on underwater autonomous vehicles and land-based autonomous vehicles.