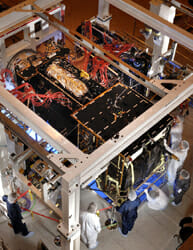 The Air Force is poised to forego putting nuclear detonation detection sensors on the Space-Based Infrared System (SBIRS) satellites, a decision that could complicate efforts to maintain the GPS system by hampering plans to launch multiple, lighter GPS satellites on a single rocket.

The Air Force is poised to forego putting nuclear detonation detection sensors on the Space-Based Infrared System (SBIRS) satellites, a decision that could complicate efforts to maintain the GPS system by hampering plans to launch multiple, lighter GPS satellites on a single rocket.

Gen. William L. Shelton, the commander of Air Force Space Command, told members of a House Armed Services subcommittee March 8 that he understood the Air Force would not include nuclear detonation detection capability on SBIRS — although he was not sure where the service was in its decision process.

The SBIRS architecture features a mix of GEO satellites and payloads in highly elliptical earth orbit that provide a timely, accurate, and clear infrared view of any region of interest around the globe. The first SBIRS GEO-1 satellite launched a couple of months ago is currently undergoing operational certification tests and evaluation.

“I believe we have decided that we do not need to include those sensors on SBIRS satellites,” he said in response to a query from Rep. Loretta Sanchez, D-Calif., a member of the Strategic Forces Subcommittee. “That is because we have sufficient capability on other satellites, including GPS satellites that have a very robust nuclear detonation detection system on them.”

The Air Force, however, has been looking at stripping down the GPS satellites in an effort to lighten the spacecraft sufficiently to be able to launch them two or three at a time — as is done for other satellite navigation constellations such as GLONASS and Galileo. Multiple-satellite launches would not only save hundreds of millions of dollars per launch but reduce the risk that the GPS service will be degraded by a spate of failures among the aging satellites, GPS experts familiar with the issue have told Inside GNSS.

Inside GNSS learned last year that the nuclear detection sensors were among those payloads that might be dropped to make a lighter “Spartan” GPS satellite. Leaving the sensors on the GPS satellites would make it more difficult to squeeze multiple spacecraft onto a single rocket, confirmed a GPS expert knowledgeable about the debate.

“It clearly does make it harder for dual launch or triple launch,” the expert explained. “The additional weight and power is substantial.”

The difficulty goes beyond the size of the satellite to the challenges of integrating the sensors and the GPS system on one spacecraft, said the source, who asked not to be identified. “Nuclear detection — it is a listening device. There is a lot of engineering complexity [involved] in ensuring that there is not some sort of interference.”

Dual, even triple, launches are critical to maintaining the capabilities of the constellation, sources have told Inside GNSS.

Defense officials are anticipating needing more launches than there are rockets available in 2015 and 2016 because of the number of defense and intelligence programs vying to get into orbit, another expert familiar with the problem told Inside GNSS earlier this year.

This is particularly problematic for GPS managers because the aging GPS satellites — many of which have continued long after their expected operational lifespan — are increasingly likely to fail. Should there be a shortage of rockets just as clusters of satellites need to be replaced, GPS users could be left with a less capable constellation.

Recent studies by GPS III contractor Lockheed Martin and launch provider United Launch Alliance have affirmed the feasibility of launching two GPS IIIs from a single EELV (Evolved Expendable Launch Vehicle), said Air Force Space Command in an e-mail response to questions from Inside GNSS.  It remains unclear, however, whether that would be with or without the nuclear detonation detection payloads.

“The study demonstrates that the GPS III satellites can be dual launched with very little change to the spacecraft, meaning the NDS [Nuclear Detection System] payload would remain,” said Lockheed Martin spokesman Michael Friedman via e-mail.

Although the Lockheed Martin study is not publicly available, Congress has been promised a report on the decision not put the nuclear detection payload on SBIRS, said Sanchez.

She asked Shelton during the hearing when that report might be delivered, adding that she is frustrated with not getting reports from the Department of Defense in a timely fashion. Shelton said he would check on when the SBIRS report would be available.