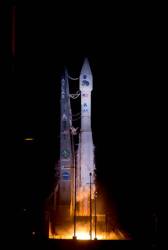 "Scientists will learn in unprecedented detail how the radiation belts are populated with charged particles, what causes them to change and how these processes affect the upper reaches of the atmosphere around Earth," says John Grunsfeld, associate administrator for NASA’s Science Mission Directorate at Headquarters in Washington. "The information collected from these probes will benefit the public by allowing us to better protect our satellites and understand how space weather affects communications and technology on Earth."

The two satellites, each weighing just less than 1,500 pounds, comprise
the first dual-spacecraft mission specifically created to investigate
this hazardous region of near-Earth space, named for their discoverer,
James Van Allen. The two belts encircle the planet and are filled with
highly charged particles and are affected by solar storms and coronal
mass ejections.

With the maximum phase of activity in the current solar cycle
expected to occur next May, the RBSP program represents a timely
addition to a subject of concern to GNSS users worldwide.

"We have never before sent such comprehensive and high-quality
instruments to study high radiation regions of space," says Barry Mauk,
RBSP project scientist at the Johns Hopkins University’s Applied Physics
Laboratory (APL) in Laurel, Maryland. "RBSP was crafted to help us
learn more about, and ultimately predict, the response of the radiation
belts to solar inputs."

The hardy RBSP satellites will spend the next two years looping through
every part of both Van Allen belts. By having two spacecraft in
different regions of the belts at the same time, scientists finally will
be able to gather data simultaneously from different perspectives
within the belts themselves, learning how they change over space and
time.

Designers fortified the RBSP spacecraft with special protective plating
and rugged electronics to operate and survive within this punishing
region of space that other spacecraft avoid. In addition, a space
weather broadcast will transmit selected data from those instruments
around the clock, giving researchers a check on current conditions near
Earth.

Space weather is caused in great part by the sun’s influence on the Earth and near-Earth
space, and by such solar events as coronal mass ejections (CMEs).
Fluctuations in space weather conditions can increase the dose of
radiation that pilots and passengers receive during polar aircraft
flights, disable satellites, cause power grid failures, and disrupt GPS,
television, and telecommunications signals. Inside GNSS will present a
web seminar on the subject of space weather later this year.

In addition to the comprehensive science data that RBSP will be sending
down when the spacecraft are in sight of their primary downlink stations
(about 2.5 hours per day for each spacecraft), RBSP will also broadcast
data on space weather conditions about 90 percent of the time for 24
hours a day, seven days a week, via a signal that can be acquired and
monitored by registered users. More information ont RBSP’s space weather data program can be found at the RBSP Science Gateway.

The Johns Hopkins University Applied Physics Laboratory (APL), in
Laurel, Maryland, built and will operate the RBSP spacecraft for NASA’s
Living With a Star program, which is managed by the NASA Goddard Space
Flight Center (GSFC), in Greenbelt, Maryland.

RBSP was lifted into orbit aboard an Atlas V 401 rocket from Space
Launch Complex-41 at Cape Canaveral Air Force Station, Florida. During
the next 60 days, operators will power up all flight systems and science
instruments and deploy long antenna booms, two of which are more than
54 yards long, to begin gathering data.