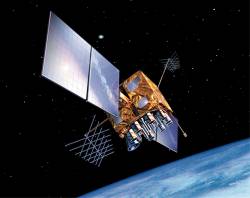 In fall of 2009, the U.S. Air Force will begin broadcasting a transitional civil navigation (CNAV) message on the GPS L2 civil signal (L2C) now being transmitted on the modernized Block IIR (IIR-M) satellites. Currently, L2C is being broadcast as a dataless sequence without modulation.

In fall of 2009, the U.S. Air Force will begin broadcasting a transitional civil navigation (CNAV) message on the GPS L2 civil signal (L2C) now being transmitted on the modernized Block IIR (IIR-M) satellites. Currently, L2C is being broadcast as a dataless sequence without modulation.

According to a press release issued November 3 by the GPS Wing at the Space and Missile Systems Center, Los Angeles Air Force Base, operators at the 50th Space Wing and the 2nd Space Operations Squadron at Schriever Air Force Base, Colorado, will upload new software to the IIR-M satellites enabling the first broadcast of the transitional message on the L2 frequency (1227.60 MHz).

With the upcoming launches of the remaining two IIR-Ms, a total of eight GPS IIR-Ms will transmit the new CNAV message. In addition to the IIR-Ms, the Block IIF satellites to be launched beginning next year will have the built-in capability to broadcast the new message.

The first steps toward GPS modernization began with a White House press release on March 30, 1998, announcing that the United States intended to modernize its GPS position, navigation, and timing (PNT) service with the addition of a second civil signal. In 2001, the then GPS Joint Program Office and the civil community began work to define the new signal.

The modernized L2C signal was designed with several significant advantages over L1 C/A-code signal, including a lower tracking threshold and better cross-correlation protection than. The data portion of the L2C signal is also different: instead of the current “legacy” navigation (LNAV) structure with subframes of data repeating in a fixed pattern, the CNAV structure has individual messages that can be broadcast in a flexible order with variable repeat cycles.

The CNAV structure, as defined in Interface Specification (IS)-GPS-200D, Dec 7, 2004, allows up to 63 different message types, of which 15 types have already been defined, according to the GPS Wing. The 15 CNAV message types will be incrementally phased in over time, with the first CNAV message to broadcast being the “default message,” also known as Message Type 0.

Message Type 0 consists of a 12-second, 300 bit–long message that includes a preamble, satellite pseudorandom noise (PRN) number, message type ID (=0), GPS time of week, a sequence of alternating 1s and 0s, and a cyclic redundancy check (CRC) parity block. The GPS Time of Week will change every 12 seconds, as will the CRC bits.

The addition of the L2C signal, with the modernized CNAV messages, is only part of the larger GPS modernization program. In addition to L2C, a third civil signal will be added centered at the L5 frequency (1176.45 MHz) as well as M-code signals on L1 and L2. L5 will also carry CNAV messages and will broadcast from the IIF and GPS III satellites.