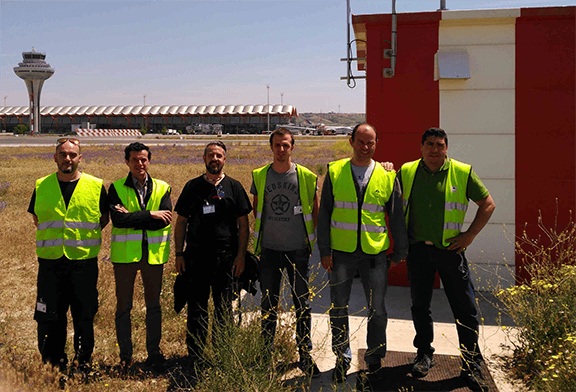 The three new GNSS stations are part of a total of four planned to be installed this year at some of the most important Spanish airports in terms of traffic and passenger volume. The activity took place in the frame of a contract signed between PildoLabs and ENAIRE in July 2017 for the extension and improvement of ENAIRE’s GNSS monitoring network. In particular this activity covers the extension for the airports of Barcelona – El Prat, Madrid – Barajas, Palma de Mallorca and Fuerteventura (Canary Islands).

Due to the commissioning of new GNSS constellations such as Galileo, the implementation of PBN procedures, and the threat that unintentional and intentional interferences put on GNSS-based operations, an update of the GNSS monitoring network was considered to be necessary. This update is focusing on the quality control of multi-frequency and multi-constellation GNSS signals and performances, and on the analysis of the benefits provided by GNSS technology for the aviation sector in Spain. With these main objectives in mind, a tailored version of The OWL (PildoLabs’ GNSS performance monitoring and interference detection service) has been installed in the Central Processing Unit and will be operated by ENAIRE.

The expertise and trajectory of PildoLabs in the satellite navigation field, being the main contractor of EUROCONTROL for the EGNOS Signal-in-Space validation for aviation users since 2001 to 2014, has marked the company as a prime candidate to perform this GNSS monitoring network update, ensuring the best quality and key performances for ENAIRE.

FLAG, More Than 5 Lives
Upon the success and work performed as Advisory Group of 5-LIVES Research and Development project, funded by the European GNSS Agency (GSA), the FLAG working group chaired by PildoLabs is now consolidated as the European focal point in terms of coordination and harmonization on the early implementation of satellite-based rotorcraft operations.

The development of advanced operations and products based on the use of European Global Navigation Satellite Services (EGNOS and Galileo), represents an opportunity for providing a more efficient and safe service to the society. Thanks to EGNSS, rotorcraft operators will be enabled with 24 hour a day operations in instrument flight conditions, ensuring more immediate and effective responses to an emergency or distress situation.

Attendees had the opportunity to discuss topics with the U.S. Federal Aviation Administration (FAA), as well as other experts in the industry.

With support from GSA, the FLAG is confirmed to continue running, with the aim to keep promoting further the use of EGNSS in a sector demonstrated to be the most efficient means to ensure in a timely manner any response to an emergency situation.