From software-in-the-loop through to final form testing, SimIQ enables developers to collaborate across the full design lifecycle through the creation, sharing and replay of in-phase/quadrature (I/Q) data files.

Target market segments  for the new software include military, space, chipset/handset manufacturers and automotive/drones.  Respectively per segment, the problem solved by Sim IQ is generation of classified codes and signals without sharing confidential data; validation of PNT algorithms before the expensive hardware design; testing and validation prior to ASIC design, and injection of external signals such as interference; and generation of IQ files to test software GNSS receivers (SIL testing). 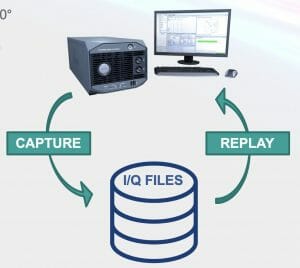 Simply put, the decomposition of any signal into two amplitude modulated sinusoidal waves (I and Q) offset by 90°. Digitalized data can then be stored into files (capture) and read afterwards (replay).

I/Q data is stored using 2 files (same name, different extension):
• A Metadata File, compliant with the ION GNSS SDR Standard Working Group Metadata Standard. It contains all the information required by the system or SDR to replay the associated I/Q.
• An I/Q File, which contains all the intrinsic information about the I/Q signals that are being captured or replayed.

The new software will bring significant benefits to developers in the aerospace, automotive and defense industries, as Ricardo Verdeguer Moreno, Product Manager for SimIQ explains: “SimIQ Capture enables developers to test their receiver algorithms in the earliest stages of design in order to minimize their costs. This provides designers with full assurance that they can move forward with confidence to the hardware design phase.”

SimIQ will be available to new and existing customers beginning in Q4 2020. For more information about Spirent’s SimIQ test capability for Spirent GNSS simulators, visit the SimIQ product page.

SimIQ Capture allows the capture of IQ data into a file stored in the host PC (see Figure 2). In this mode of operation, the user is able to create and run scenarios with the different constellations and frequencies specified in the SimIQ licence feature, regardless of the constellations and frequencies licenced for the RF mode. In other words, the licencing for SimIQ Capture is completely independent of the licencing for the RF settings. This is possible and compatible with the previous pricing scheme since it is not possible to capture IQ data while generating RF signals.

Test your GNSS Software Receiver. As GNSS receivers design becomes more complex, early testing is essential to avoid expensive errors and delays. Testing receiver parameters such as positioning and timing accuracy, acquisition and tracking sensitivity, and resilience with software-in-the-loop can help developers to identify the most appropriate hardware frontend for the receiver.

Virtual Environments (SIL). Certain applications, such as autonomous vehicles, require an extensive amount of testing to ensure the robustness and reliability of the PNT solution. To optimise their testing time and ensure a timely release in the market, developers are including virtual testing into their product roadmap. SimIQ Capture enables the injection of GNSS I/Q data into the virtual environment, removing the RF real-time constraint allowing massive parallel simulation.

SimIQ Replay allows the replay of IQ data from a file stored in the host PC (see Figure 4). In this mode of operation, the user is able to create and run scenarios using pre-recorded IQ files. Each channel back is associated with a frequency-band. The user can assign any IQ file in that frequency-band to the channel bank, regardless of the constellations and content of it.

All GNSS Signals. SimIQ Replay is compatible with all the constellations, frequencies and codes supported by Spirent simulators. Users can read I/Q files generated with SimIQ Capture or any external tool.

Interference & Custom Waveforms. SimIQ Replay can generate any RF signal given a centre-frequency (L1, L2, L5 or L6) and its bandwidth. This enables customers to not only generate the well-known GNSS signals, but also custom waveforms, noise, or even interference and jamming events.