Having developed a breakthrough technology, the hard work is far from over. Now you have to show potential customers that previously unheard-of levels of performance can be achieved with lower-cost materials.

The challenge for chip designers at Physical Logic has been to convince inertial measurement unit (IMU) and UAV manufacturers that the company’s revolutionary approach to micro-electromechanical systems (MEMS) machining can vault low cost, weight and power (C-SWaP) accelerometers several tiers above in the accuracy hierarchy. In short, MEMS can replace the traditional mechanical or solid-state accelerometer in all applications, achieving tactical and even navigation-grade inertial performance.

“Almost all of these [traditional mechanical accelerometers] can easily be replaced with a Physical Logic closed-loop,” said Aviram Feingold, the company CEO. “If you wish to compare the systems, you will see. These are mainly for navigation, where an achievement of 70g enables us to get into maybe 90% of the end-user applications. UAVs, helicopters, missiles, marine applications, and now there are wireless applications where 30 g is not enough, they need 50g or 70g.”

Two variants of an innovative accelerometer design, Open-Loop and Closed-Loop, are based on a unique in-plane bulk micromachining process. This is performed on silicon-on-insulator (SOI) wafers, assembled with application-specific integrated circuit (ASIC) with an analog front end and a temperature sensor in a custom-tailored, hermetically sealed and compact LCC20 package. 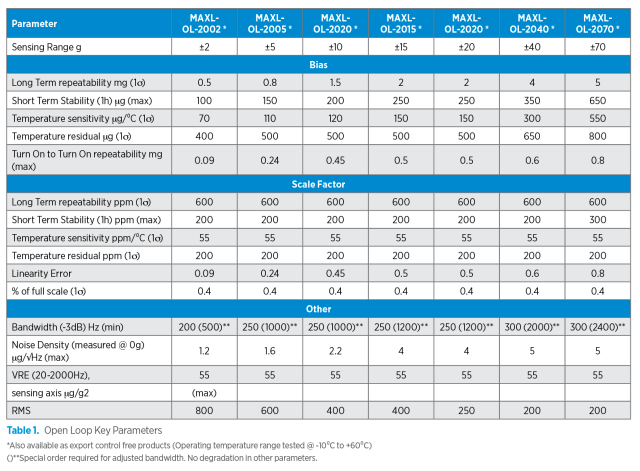 In-plane micromachining takes advantage of the normal MEMS benefits such as low-cost manufacturing and easy integration with microelectronics. However, it avoids the downsides of high-impedance readout for capacitive sensing. This readout node is highly susceptible to parasitic leakage current and electromagnetic interference. In-plane micromachining uses a full-bridge capacitive sensing configuration for parasitic rejection and improved noise performance.

It also enables improved linearity. With equally distributed sensing capacitors on the area of the MEMS die, the process further leverages its symmetric mechanical geometry to offer high stability performance. The simplicity of the design means that only minor architecture changes are required to achieve various sensing ranges.

Thus equipped, the Closed-Loop series goes even further, replacing tactical and navigation-grade mechanical accelerometers. With qualification of its sensing range up to 70g, it is ideally suited for high-end navigation applications, such as UAVs, other autonomous vehicles, aviation and space. It offers improved performance in the form of scale factor linearity, bias stability and vibration rectification.

Recently, Physical Logic announced the completion of qualification and production readiness of the MAXL-CL-3050, a new 50g sensing range sensor based on MAXL-CL-3000 family. As with the 15g and 30g configurations, the performance of MAXL-CL-3050 allows it to compete with traditional mechanical accelerometers in the most demanding navigation-related applications. Yet higher levels of performance are reached with the new 70g sensor. 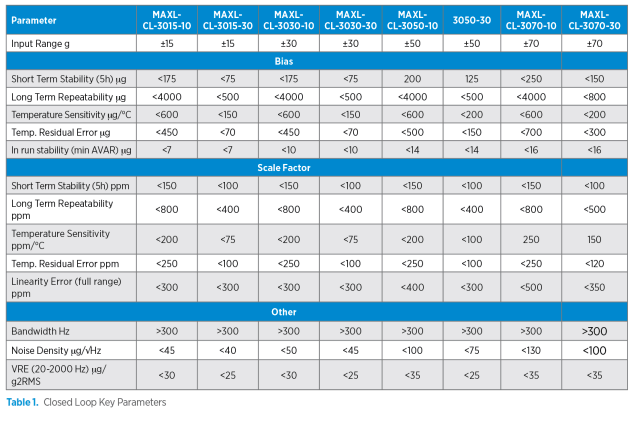 The MEMS manufacturing process has normally followed an out-of-plane design. The resulting products require vacuum packaging, since damping of large parallel plate electrodes is very severe in the out-of-plane configuration. Vacuum sealing always has a reliability problem. The in-plane process can take advantage of atmospheric pressure sealing for improved reliability and simplicity.

Out-of-plane sensors using the gap-changing principle sacrificed linearity performance. In-plane machining does away with this, due to it capacitance area-changing architecture. And, as previously stated, full-bridge capacitance sensing architecture provides parasitic rejection and improved noise performance, both of which are very difficult to achieve with out-of- plane devices.

“The main advantage is almost zero VRE,” said Aviram Feingold, Physical Logic’s chief executive officer. “The reality here is that the VRE is a magnitude better in a closed-loop accelerometer, 10 times better than the open-loop accelerometer.

“Take, for example, the application of package delivery systems, in which safety is the most important parameter. One accident caused propeller vibration affecting the navigation of a delivery drone will have huge repercussions. So this is one of our primary end-user target applications: contacts that we have with UAV manufacturers specifically making package delivery systems.”

Many navigation applications require input acceleration measurements higher up to 50g or 70 g. This can be difficult to achieve without losses in other key performance parameters. This necessitates very close understanding and careful management of the overall error budget.

Closed-loop operation eliminates the tradeoff between performance and sensing range by using capacitive sensing and feedback voltage to determine the sensing range, optimizing for both outcomes. A company-developed theoretical error budget thus leads to a MEMS design achieving low bias sensitivity and superior performance over temperature and time.

“One interesting application is resource exploitation,” said Feingold, “where you need underground navigation. You have no GPS time, and long measurements underground, it’s very difficult. These companies know now that we have quantified our performance, and we start to get feedback that in terms of accuracy, we provide the good results, better than our competitors.”

Figure 2 shows open-loop and closed-loop accelerometers prior to cover sealing.

“Fundamentally, both open loop and closed loop are based on the same in-plane technology that allows for a very linear transfer function from acceleration to the voltage to the capacitance that we see,” added Lisa Koenigsberg, the company’s chief technical officer. “Because we’re using not just a gap effect, the design is optimized to get as much sensitivity as possible. With an in-plane configuration, it’s much easier to optimize. That’s really what allows the good performance in the VRE and scale factor. Because we have a lot of sensitivity, it’s very linear from the core technology.

“When we close the loop, we have basically three capacitor sections that are all mechanically attached. The acceleration now is the voltage that we apply to those actuators. That’s how we can get a high sensing range, because it’s only dependent on the voltage.

“The nice thing about the closed loop is benefiting from everything and getting all the nice performance from a low range. The high range is achieved not with a motion or displacement, but rather the voltage. So you get a high range and small biases from let’s say, a 2g accelerometer, and yet you can measure up to 50g or 70g.”

“Another thing we are doing here,” said Feingold, “to convince our customers is that we are running lifetime testing to accelerate the C-Swap. We actually use accelerometers for many months, under 60 degrees. Every month we take them out, do some testing and bring them back, we test again and again and again to show very nice results.”

MEMS accelerometer advances over the past two decades have opened up new opportunities in many areas of motion sensing. With the explosive growth of UAVs, precision requirements for highly dynamic, high-vibration platforms have increased the downward pressure on cost, weight, size and power. The unique advantages of in-plane MEMS architecture introduced by Physical Logic mean that acceleration, vibration, shock, tilt and rotation in high-g applications can be measured with greater accuracy than previously achievable in small, light form factors. Open-loop and closed-loop MEMS accelerometers can now replace high-cost instruments in most high-end applications.