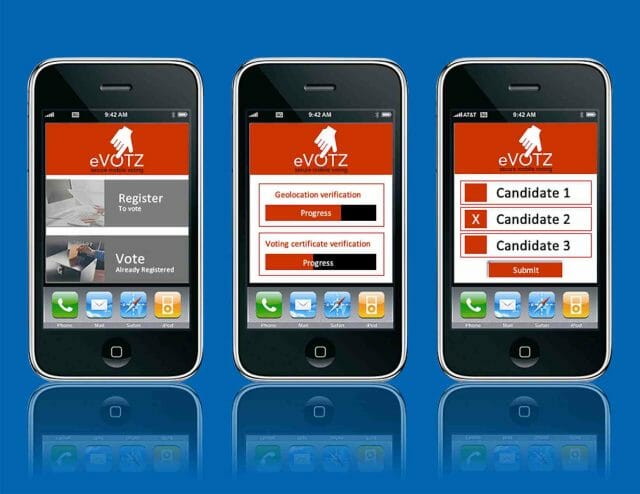 A feature article on eVOTZ will appear in the November/December issue of Inside GNSS magazine. The USA Challenge was organized by Inside GNSS and cosponsored by NovAtel, Inc., the Calgary, Canada–based developer and manufacturer of GNSS products. Inside GNSS also serves as the ESNC global media sponsor.

Earlier, the magazine announced five finalists in the USA Challenge as selected by a panel of six GNSS experts. Other top applications included a virtual reality
augmentation for automobile windshields, multi-source
traffic information, a parking locator app for
handicapped drivers, and another an
interactive LBS smartphone app for tourists.

Klein and his technical and entrepreneurial team members developed their patent-pending solution to geo-fence a user’s pre-validated location at the time of voting using cell tower triangulation, SIM cards, and assisted GPS (A-GPS) to authorize and verify voting permissions. These transactions are communicated via mobile telecom services and the Internet.

“Cell positioning technology today provides for an appropriate level of location accuracy and this is especially true when indoors, where most voting takes place,” Klein says.

Other mobile sensors and associated application programming interfaces (APIs) could be applied to the voting process to further provide verification and authentication, according to Klein: durable computer-readable QR (quick response) code or related barcode image tags (i.e., graphic IDs similar to barcode), near-field communication (NFC) and signature verification images from driver’s licenses or passports (or, conceivably, even face-recognition biometric technologies). These could use the mobile camera within most mobile devices to combine an image with a voter database to create even more secure and verifiable voting methods.
eVOTZ is launching with two main focus products that may be expanded to meet the needs and interests of the company’s various target market audiences:

* eVOTZ Secure Vote –an authentication and verification platform based on real-time mobile voting device location. The platform registers and allows users to opt in and to designate using their mobile device — such as a smartphone, iPad, SMS feature phone, or netbook device—for both receiving specific company proxy information and also casting a vote or polling response directly from their device on a mobile browser connected to a mobile carrier network.

* eVOTZ Media Share – which extends capabilities of Secure Vote solutions, enabling proxy communication and opt-in sponsored internet information links and video messaging to localize communications down to specific users. This serving and viewing of supplemental internet content, related to the vote event, can be measured to enable proxy service organizations to report the success of delivery campaigns and also charge fees on pay-per click, or pay-per-message served basis.
Prior to winning the USA Challenge, eVOTZ has gained numerous awards including:

In addition to being featured in the forthcoming issue of Inside GNSS, Klein and eVOTZ received a $1,000 cash prize, a trip to the ESNC awards ceremony in Munich, and a two-day consultation with researchers at the University of Calgary Positioning Location and Navigation (PLAN) group.