In difficult GNSS signal environments for driving—and here urban canyons, tunnels and parking structures are the standouts—GNSS performance may be severely degraded or completely denied. Inertial aiding has become the standard for ground vehicle navigation. Requirements for autonomous navigation in these circumstances will be rigorous, but those for map-matching, telematics and fleet vehicle tracking are much less so. Simply a consistent and reliable positioning on the meter level, capable of withstanding 5 to 10-minute outages, will answer a growing need. Low cost, ease of installation and self-containment, with no need to connect to the vehicle’s CAN bus, are the key drivers in this market.

One such solution is the GNSS/Inertial Vehicular Engine (GIVE) for automotive navigation. Using consumer-grade, relatively low-cost GNSS chipsets with microelectromechanical systems (MEMS) inertial sensors of cell-phone quality, it enables robust navigation capabilities. Its strength is in the sensor-agnostic software, which is customizable to the implementation platform. Tight coupling of carrier-phase GNSS with inertial measurements and a vehicle motion model and software-based multipath mitigation yield consistent position, velocity and attitude data in challenging environments.

The navigation engine fuses GNSS carrier-phase measurements and pseudoranges with IMU measurements and a vehicular motion model featuring non-holonomic constraints and zero-velocity updates. Non-holonomic means it is implicitly dependent upon parameters such as, in this case, constraints in the velocity domain of not leaving the Earth’s surface or moving suddenly to the side, as is consistent with ground vehicle behavior. The zero-velocity updates detect when the car stops, and use that for updating the inertial position, thus halting inertial drift.

Altogether, the system can coast for a relatively long time—5 to 10 minutes or longer—without GNSS data, and without expensive hardware. 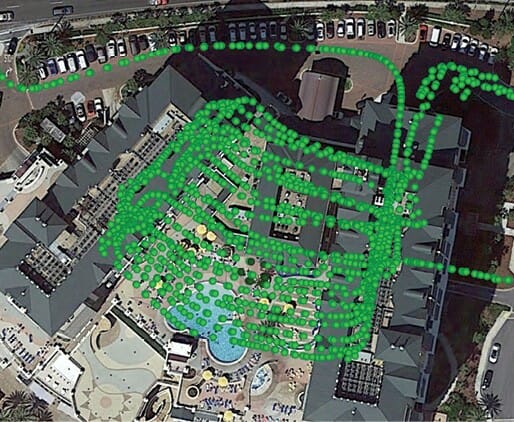 When GNSS and inertial technologies are combined for challenging environments, identification of GNSS measurement outliers, mainly caused by multipath, and excluding them from the data fusion becomes key to the process. GIVE includes algorithms to detect and exclude bad measurements, thus negating multipath effects. Multipath mitigation in the engine has two levels of protection:

Measurement quality control can be accomplished most efficiently by predicting GNSS measurements values based on the inertial solution; comparing predicted and actual measurements; and, then discarding measurements with large discrepancies. GIVE applies INS-based statistical gating to eliminate those GNSS measurements that do not agree with their values predicted based on inertial outputs.

PDAF further mitigates the influence of outliers that pass through the residual check. PDAF modifies the Kalman filer estimation step by directly incorporating a probability of outlier missed-detection into the measurement/prediction weighting scheme. The use of PDAF proves particularly beneficial for “transitioning” cases, from GNSS-denied to GNSS-challenged, such as exiting from a tunnel into an urban canyon. For such cases, residual sigma bounds are increased due to unmitigated inertial drift, and multipath errors can leak through leading to detrimental effects on the navigation performance. De-weighting of potentially corrupted measurements based on their respective missed-detection probabilities significantly improves the robustness of the multipath mitigation performance.

The engine also takes advantage of temporal carrier-phase differences over time. Temporal differencing eliminates integer ambiguities while capturing the underlying motion dynamic for the INS error-state estimation. The use of temporal differences is particularly beneficial for the identification and removal of close-range non-line-of-sight (NLOS) multipath errors. It may be challenging to identify multipath signals reflected by buildings within a close range in the range domain. Yet, significant Doppler differences are generally present, due to the difference in LOS between direct and multipath signals, which makes multipath errors readily distinguishable in the temporal phase domain.

Extensive test results in difficult urban environments in Chicago, San Francisco, Atlanta metropolitan centers and elsewhere have demonstrated consistent navigation performance in harsh GNSS environments. Figures 1 and 2 show some of the results of those tests.

GIVE can be installed as an after-market device on almost any vehicle; it can also be ported onto the user’s smartphone.

GIVE is a product of QuNav, founded by Andrey Soloviev and based in Fort Walton Beach, Florida. The technology was showcased at ION GNSS+ 2019.