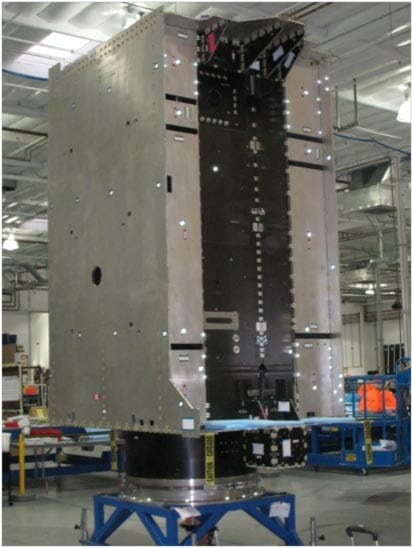 The program remains on schedule for a 2014 launch of the first Block III space vehicle (SV).

The program remains on schedule for a 2014 launch of the first Block III space vehicle (SV).

The GNST is a full-sized, flight equivalent prototype of a GPS III satellite used to identify and solve development issues prior to integration and test of the first space vehicle — the so-called pathfinding process. The approach is designed to reduce risk, improve production predictability, increase mission assurance, and lower overall program costs.

"The on-schedule delivery of the GPS III pathfinder is a key indicator that this program is on firm footing and poised to deliver on its commitments," said Lt. Col. Don Frew, the U.S. Air Force’s GPS III program manager.  "In this challenging budget environment, we are committed to delivering the critical GPS III capabilities to users affordably and on schedule."

GPS III satellites are being designed to deliver better accuracy and improved anti-jamming power while extending the spacecraft’s design life and adding a new civil signal (L1C) designed to be interoperable with other GNSSes.

GPS III Processing Facility
To reduce the cost of each GPS III satellite, the program invested in an advanced technology facility designed to create a true production line for GPS III. The facility, designated the GPS Processing Facility (GPF) and modernized from the company’s former Atlas rocket assembly building, has nearly 40,000 square feet of spacecraft assembly and test area, including a clean room high bay and dedicated thermal vacuum and anechoic test chambers.

The high bay was designed to flow with maximum efficiency by minimizing space vehicle lifts and distances between operations. To do this, the GPS team studied Lockheed’s high-volume aircraft production lines and employed virtual reality modeling technology to lay out the factory floor.

As in aircraft and automobile production, each GPS III satellite will move through sequential work stations for various assembly and integration operations, culminating with environmental test procedures. Starting with the pathfinder SV, the GPF will significantly reduce cycle time and shave cost for each sequential GPS III satellite.

In parallel with the GNST, progress on the first space vehicle is proceeding on schedule. Lockheed Martin received the core structure for the first GPS III satellite in Stennis, Mississippi, on August 4 and is now integrating the space vehicle’s flight propulsion subsystem. The integrated core propulsion module will be shipped to the GPF in the summer of 2012 and will then undergo final assembly, integration and test in order to meet its planned 2014 launch.