Alternative PNT from low-Earth orbit (LEO) satellites is being developed or proposed by various entities. Satelles delivers a fully operational Satellite Time and Location (STL) service to back up or augment GNSS, strengthening the resilience of critical infrastructure. This article details STL’s timing synchronization performance with different types of user equipment.

STL is a time-of-arrival (TOA) multilateration system offering three-dimensional (3D) positioning and timing using dedicated satellite signals, designed by Satelles for the Iridium satellite communication system. The STL signals are broadcast in the L band by Iridium’s 66-satellite LEO constellation at an orbital altitude of 780 km.

STL has been continuously operational since June 2016, and the system is currently fulfilling the timing and positioning requirements of enterprise applications in many sectors across a worldwide customer base

STL broadcasts are up to 1,000 times (30 dB) stronger than GNSS, making them highly resistant to signal interference or manipulation. STL signals are delivered in bursts, and users usually receive several bursts every second. Timing accuracy will improve as more bursts are received, typically converging to a stable solution in minutes. Timing solutions are available with sub-microsecond and sub-hundred-nanosecond accuracies, with zero long-term drift.

Location information (positioning) is also available for those user applications that require latitude, longitude, and elevation.

The STL system allows a receiver to decode the bursts and perform precise Doppler and range measurements at attenuation levels that allow the signal to pass through structures and other occlusions. This capability provides coverage in deep indoor and urban canyon environments where GNSS signals are typically obstructed or degraded. (see “Test Confirms Timing Resilience of LEO Time Service Underground, Indoors”; Inside GNSS, 3-Feb-2020)

Security is also a key attribute of STL’s PNT capability. The localized spot beam attribute of the Iridium system combined with modern cryptographic techniques enable a proof-of-location approach that allows STL to deliver a secure, trusted time and location capability that is highly resilient and difficult to manipulate.

Various STL-enabling modules and end solutions are available today from original equipment manufacturers (OEMs) partnered with Satelles. Orolia and Jackson Labs Technologies, Inc. are just two of the companies producing STL-compatible receivers, and this report looks at the performance characteristics of their UE compared to the Satelles reference system.

The individual tests described here show STL delivering sub-microsecond timing performance in each scenario. The timing performance provided by STL did not rely on GPS at all, although GPS provided the accurate timing reference against which STL was compared.

See Table 1 for a summary of the test subject equipment. 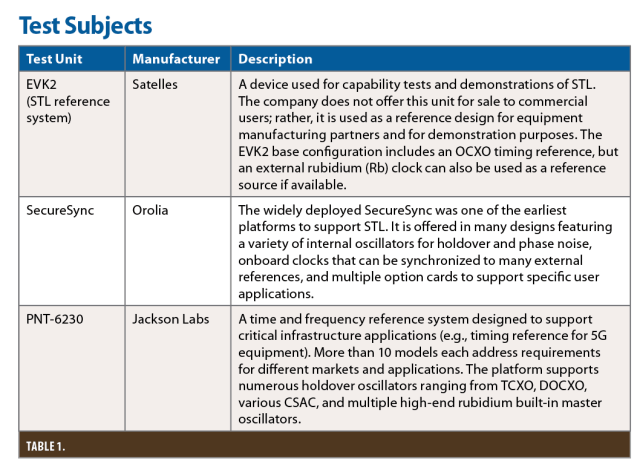 These tests were conducted using a Satelles EVK2 with an external rubidium clock, an Orolia SecureSync with a rubidium oscillator and an STL option card, and a Jackson Labs PNT-6230 outfitted with a DOCXO holdover oscillator option.

Satelles EVK2 and Orolia SecureSync. The EVK2 and SecureSync received an STL signal from an open sky rooftop antenna (PCTEL GNSS1-TMG-26N global GNSS timing reference antenna) connected to the devices with a 100-ft. LMR-400 cable. The tests were conducted with a reliable timing reference (Microsemi 5071A GPS-disciplined cesium clock primary frequency standard) and trustworthy time measurement system (Keysight 53230A universal frequency counter/timer). Both the EVK2 and SecureSync were started up and given one week for their rubidium clocks to stabilize.

A 48-hour test measured the time delay from EVK2 and SecureSync receivers’ PPS outputs to the PPS from the timing reference with the frequency counter.

Jackson Labs PNT-6230. The PNT-6230 received an STL signal from a rooftop Tallysman 2643A combined GNSS/Iridium active antenna. The PNT-6230 was allowed to warm up for 24 hours beforehand so its DOCXO could stabilize.

The 1PPS output of a PNT-6230 was compared to 1PPS generated by a Trimble Thunderbolt GPSDO, while the PNT-6230 tracked STL for 48 hours.

Results. See Table 2 for a summary of the results. STL receiver PPS error against the timing reference PPS was plotted using R with the fixed PPS offset caused by cabling and receiver characteristics calibrated out to zero (See Figure 1). 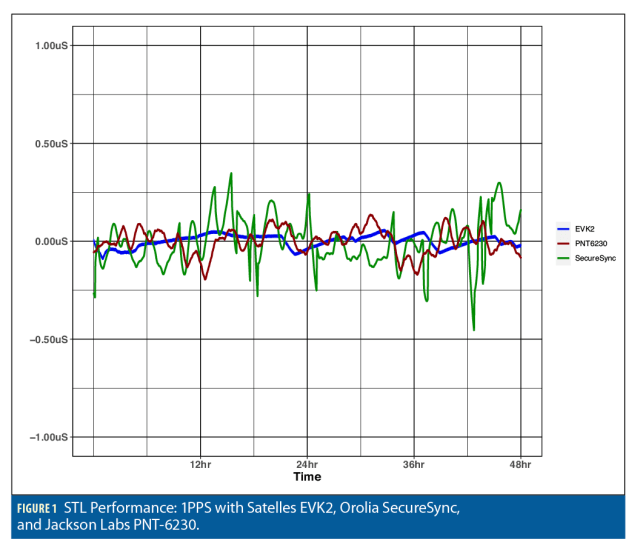 Using the same configuration described above (except for the Tallysman 2643A antenna being located indoors instead of on the roof), the Jackson Labs PNT-6230 was allowed to track STL for approximately 130,000 seconds (over 36 hours) while continually disciplining its internal DOCXO from the timing provided by STL alone. At the end of this period, the antenna receiving the STL signal was disconnected from the PNT-6230, causing its DOCXO to enter holdover and remain in that state for over 24 hours. The frequency of the PNT-6230 10 MHz output generated by the DOCXO was compared to 10 MHz from a Microsemi GPS-3500 GPSDO.

The plot of frequency before and after the initiation of holdover shows that the DOCXO was disciplined to within approximately ± 1×10-10 (fractional frequency) during the tracking period, with no significant bias evident, showing the ability of STL to keep it closely on-frequency. During the holdover period, the DOCXO frequency stays within a range of ± 5×10-11 fractional frequency relative to the GPSDO, with the excellent disciplining provided by STL giving it a highly accurate starting point at the initiation of holdover (see Figure 3).

Satellite Time and Location (STL) was demonstrated to provide accurate timing on different types of user equipment, thereby confirming this LEO-based source of alternative PNT as a reliable backup to GNSS for applications that require precise timing synchronization. Not only does STL deliver sub-microsecond timing precision without the need for or in the absence of GNSS, but also the service is compatible with different types of equipment with wide-ranging operational features and superb performance characteristics.

The future is bright for LEO PNT in general, but the results reported herein prove that STL in particular is a present-day technology that protects the operations of GNSS-dependent critical infrastructure and supports new applications with stringent timing requirements.