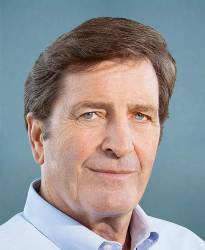 A quintet of well-placed lawmakers, tired of federal dawdling, are prepared to make the Pentagon responsible for building and maintaining eLoran as a backup system for GPS. The move could come by the end of the year, possibly through language attached to a must-pass bill.

A quintet of well-placed lawmakers, tired of federal dawdling, are prepared to make the Pentagon responsible for building and maintaining eLoran as a backup system for GPS. The move could come by the end of the year, possibly through language attached to a must-pass bill.

The two sent a joint letter last July to the Departments of Defense, Transportation, and Homeland Security — the three agencies responsible for publishing the Federal Radionavigation Plan — asking why there had been no progress on a then-10-year-old presidential directive to establish a backup for GPS.

“America’s Global Positioning System (GPS) is an essential element of nearly every infrastructure upon which our economy and security depend,” the two wrote. “While GPS is superbly maintained and operated, its signals are necessarily faint and can be easily disrupted. This has become a well-recognized and unacceptable risk for our nation.”

Since then officials from a number of agencies have been meeting to discuss establishing a GPS backup. They are weighing the advantages of old proposals like an Enhanced Loran (eLoran) system, said Karen Van Dyke, director of positioning, navigation and timing (PNT) and spectrum management at the Department of Transportation (DoT). They are also looking at new approaches, such as linking up local commercial radio frequency ranging (RF) networks into a national system.

One of the issues is understanding what system users would be willing to adopt, Van Dyke told Hunter during a July 28 hearing before the House Subcommittee on Coast Guard and Maritime Transportation.

“I hear your testimony and I’m going: ‘Here we go again,’” Garamendi said to Van Dyke during the hearing. “Yeah, there are undoubtedly alternative systems, but all of them are localized — and then coordinating all those together is going to require some sort of overarching system.  You know that. I think everybody that is interested in this has known this for at least 15 years.”

Playing Money Tag
The main stumbling block, Inside GNSS has learned, is not a technical one. The primary question is which agency will be put in charge of a backup system and gets tagged to pay the bill — some $40 million to set up a four-transmitter network that would provide timing data cross the country.  Although a $40 million program is small by federal standards; given the already painfully tight budget environment — and the general expectation that it will get considerably worse  — no agency has been willing to take responsibility.

“Do we need a single agency responsible for getting this done?” Garamendi asked Martin Faga, former CEO of the MITRE Corporation and a former assistant secretary of the Air Force. Faga is a member of the National Space-Based PNT Advisory Board, the nation’s leading group of experts on satellite navigation.

“We will,” said Faga, adding that he believed, once the interagency group decided on a course of action, they would designate an agency and work out a financing arrangement.

Finding the funding is a key element of a bill (H.R. 1678) proposed earlier this year by Garamendi and co-sponsored by Hunter. The measure would hand the responsibility for a GPS backup to the Pentagon and give it three years to have the network “fully operational.”

The legislative proposal’s other co-sponsors are Bill Shuster, R-Pennsylvania, Frank LoBiondo, R-New Jersey, and Peter DeFazio, D-Ore. All five lawmakers are members of the House Transportation and Infrastructure Committee of which Shuster is chairman and LoBiondo is a subcommittee chair. Four of the five — Garamendi, Hunter, Shuster, and LoBiondo are also on the House Armed Services Committee and in positions to make life difficult for Pentagon officials should they prove less than enthusiastic.

But why tap the Pentagon and not the Department of Homeland Security or Transportation?

“First of all you go to where the money is,” Garamendi told those attending the July 22 meeting of the D.C. Chapter of the Institute of Navigation. “I love the Department of Transportation. The Coast Guard — perfect organization.  Flat out no money. However, I love the Department of Defense — over $600 billion — not a nickel for a backup system. Something is wrong with that equation.”

Plans B and C
The GPS backup legislation, however, has yet to make it out of committee. What is out of committee and in the hands of conferees in the National Defense Authorization Act or NDAA.

Garamendi suggested that it might be possible to address getting a GPS backup through the Senate/House conferencing process for that bill. “We have time, under that congressional time clock, and that’ll be into the fall, when the NDAA actually goes forward.”

But what are the chances? Better than usual, it appears. Among the conferees working on the NDAA are Garamendi and all three of his Republican co-sponsors: Hunter, Shuster, and LoBiondo.

In fact, a provision already resides in the authorization act that would force the DoD to take a role in a backup system.

“There’s language in NDAA that causes the Department of Defense to act,” Garamendi told the ION gathering. “God help me, but it actually says study, but it forces the [Secretary of Defense] to have a specific plan in place by January 1 of this coming year. That’s pretty fast time actually. And with that in place, it can move forward.”

If that does not work, the lawmaker has a backup plan of his own.

“There may be a way in the appropriations process,” he told the ION meeting.

Garamendi said he is prepared to tackle another stumbling block — the White House’s Office of Management and Budget (OMB). Sources have told Inside GNSS that OMB has resisted establishing an eLoran network. OMB is widely credited with killing the then-in-progress eLoran program in 2010 despite a government-wide consensus that it was the right thing to do.

“I happen to know,” Garamendi told the hearing panel, “that there’s some folks at OMB that are major problem in this. I know who they are, and I’m going to have a discussion with them.”

The next meeting of the interagency group studying the various backup options is set for September 3, Van Dyke told the House committee hearing,

“I’m really interested in hearing what’s going to go on on September 3,” Garamendi said during the hearing. “I’m telling you now that, if you guys don’t get your act together, then we must pass legislation that designates a specific federal agency to get this done within a specific timeframe.”

“Listen carefully to what I’m saying,” he said, “I don’t intend to back off.”