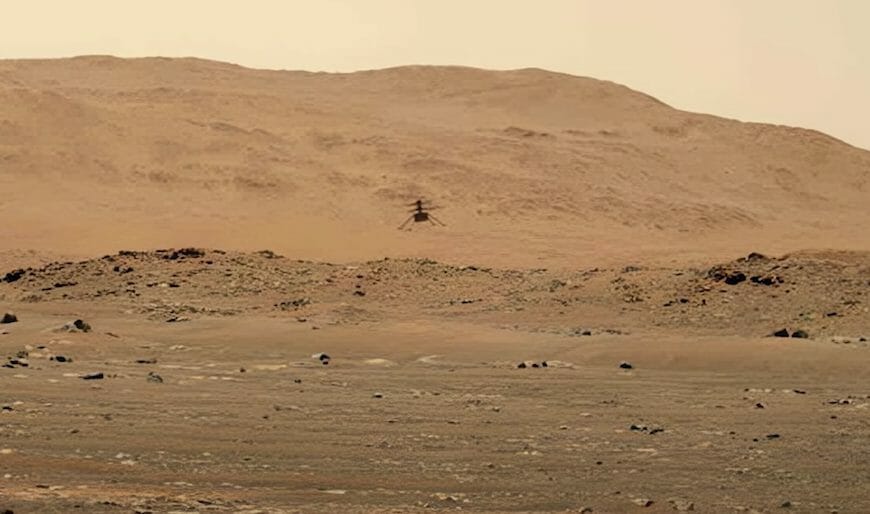 On Friday, May 7, the Ingenuity Mars Helicopter left both Wright Brothers Field and the Perseverance Rover behind. Flying for 110 seconds, Ingenuity traveled 423 feet at a new height of 33 feet, capturing high resolution color images before landing at its new Red Planet home, which bears the tepid but significant name Airfield B. Ingenuity had become an operational scout in addition to its original role as a technology demonstrator.

In previous reports, key members of the AeroVironment team talked with Inside Unmanned Systems about the company’s development of Ingenuity’s airframe and some major subsystems, its collaborations with NASA, JPL and other aviation/aerospace companies, and the challenges involved with learning to fly in Mars’ rarified atmosphere.

This final installment concludes with observations made at the time of the first flights and subsequent comments on the shift to operational status.

Comments have been edited and reordered for clarity. Alan Cameron, editor of Inside GNSS, contributed to this interview.

The scientific value of Ingenuity is that it’s going to lead to more capable science vehicles on Mars. The million-dollar question: “How do we apply that?” and there’s a lot of discussion. One of the JPL engineers put it really succinctly in their media briefing: we shouldn’t be the ones coming up with that; it should be coming from the science community. They’re going to have the good ideas.

In general, there are a couple of options. There are much larger helicopters that are being designed kind of as a rover replacement—it’s a big standalone science vehicle that can fly around, has instruments on board. There’s paired concepts with a lander like [2018’s] InSight. You have a smaller helicopter, or a quadrotor, or hexacopter, sort of like Ingenuity-size, that can go fly off and gather samples and bring them back. And then you’ve got scouts for mapping missions, where you have a small helicopter that is paired to a rover or a manned mission to Mars; it can gather better imagery, or just operational awareness of your surroundings. So there’s a lot of different ways of this to go.

At AeroVironment, we are looking at future technologies that can help: new materials, new fabrication methods, new designs, various types of mechanisms that could be enabling for some of these missions. NASA has published a number of papers as well on kind of the Cadillac science mission; they’re really big standalone helicopters. So there’s a lot of interest, obviously, especially right now, with a lot of excitement. And I think the big hope here is that that generates really good ideas.

Ben Pipenberg: So there’s no decisions being made on board. In terms of trying to identify landing sites. When Perseverance landed, they used terrain-relative navigation, and they were making decisions based on outside observable data that they were collecting without human input. That would be an autonomous system. Ingenuity is not doing that. It’s essentially using VIO—visual inertial odometry—just to navigate over the ground in a pre-determined flight path, uploading from Earth.

I would say that it depends where you draw the line and how you define it, because it certainly is making autonomous decisions to get more cyclic to overcome a wind gust. It’s managing its altitude, its managing its position, all by itself without any external intervention.

You could conceivably have the Rover camera watching it and sending it commands like a model airplane pilot would be here from Earth. But that’s not the case. It’s doing its own simple autonomy. But certainly no sophisticated mission planning or decision-making.

And it’s inherently unstable. I mean, it can’t fly for a half-second without making decisions based on the IMU and driving the control system. We’ve tried flying this type of helicopter without a control system. It goes bad quickly. It’s just the configuration of a coaxial helicopter.

Jeremy Tyler: The coaxial router system has no gyroscopic damping whatsoever. So without a digital controller, without a gyro-based autopilot, it’s entirely uncontrollable. It’s much like a quadrotor would be without avionics system.

Ben Pipenberg: Working with JPL, I think we’ve learned a lot. It’s a very AV project, it’s this weird, first-of-its-kind vehicle, but JPL is the best at what they do by far, in terms of space robotics, planetary robotics, and there was a huge amount that we were able to learn from them. And I think that we’ll be able to pull that into a lot of our work in future. It was really good teaming.

Sara Langberg [aeromechanical engineer; joined the program in 2016; started with testing, especially on the blades; moved into mechanical design and fabrication, especially composites. Also swashplate geometry and building loads models for the blades and how that interacts with the servos, plus landing gear system in general]

I think it’s very much a parallel Wright Brothers moment, in the sense that we’re doing something that no one has ever done for the history of humanity for the very first time. Way back then, they were doing something everybody thought was impossible. Look at where aviation has taken us now. So I think there’s a lot of parallels into how this is gonna open similar doors, but for space exploration.

Matt Keennon: It’s not just that it’s the Mars atmosphere being thin and gravity being different, because even if it was Earth, it still would be Wright Brothers moment. Because this thing is the first combination aircraft and spacecraft and that is such an insane level of stress put on the designers.

What really boggles my mind about this helicopter, though, is the fact that it’s now flying 16 light minutes away from Earth. That’s something that I think is far more mind-blowing than the Martian atmosphere or the temperatures or any other aspect of it.

Ben Pipenberg: The helicopter, by itself as a standalone thing, it’s kind of different from the Wright Brothers moment, because, you know, they flew an airplane for the first time. The helicopter flying on Mars by itself, that’s one thing. But the fact that technology has gotten to the point where we can have a helicopter on Mars 165 million miles away and getting farther—there’s a lot of infrastructure and technology that has to go into just getting humanity to the point that we can do that. I think it’s a good demonstration of where we’re at in terms of autonomous vehicles, in terms of spacecraft, rockets, deep space communications, all of that is absolutely critical to making this work. So I think it was more than just a demonstration of flight on Mars, you know, it’s a good demonstration of all of those technologies together.

This is really a labor of love, I think, for everybody on the project. One of the reasons why this was so successful is that everybody believed in it. We all really, really wanted to make this happen. And I think for all of us, the reason that we got into this career in general is that we love airplanes. A lot of us came from the model airplane world here at AeroVironment, and this is kind of the ultimate model airplane. If I wasn’t doing this for my day job, this is what I would love to be doing as a hobby after work. So it kind of perfectly flows. There’s a huge amount of pride, there’s a lot of excitement, obviously, that it’s flying on Mars.

Ben Pipenberg: We’re all extremely excited that Ingenuity’s success on Mars has allowed NASA to transition the helicopter from a technology demonstration into an operational demo phase where we can assist the primary science mission with valuable data products. This shows that a lot of the technologies that were developed for Ingenuity are at a point where they can be directly applied to a more capable next-generation helicopter on Mars. The increased range and endurance demonstrated in the most recent flights can enable more advanced missions such as dedicated sensor platforms, mapping applications and sample collection systems.

We’ve had our fingers crossed that we would be able to show that Ingenuity can provide a new dimension to planetary exploration on the surface of Mars, and this next phase will allow us to do just that.