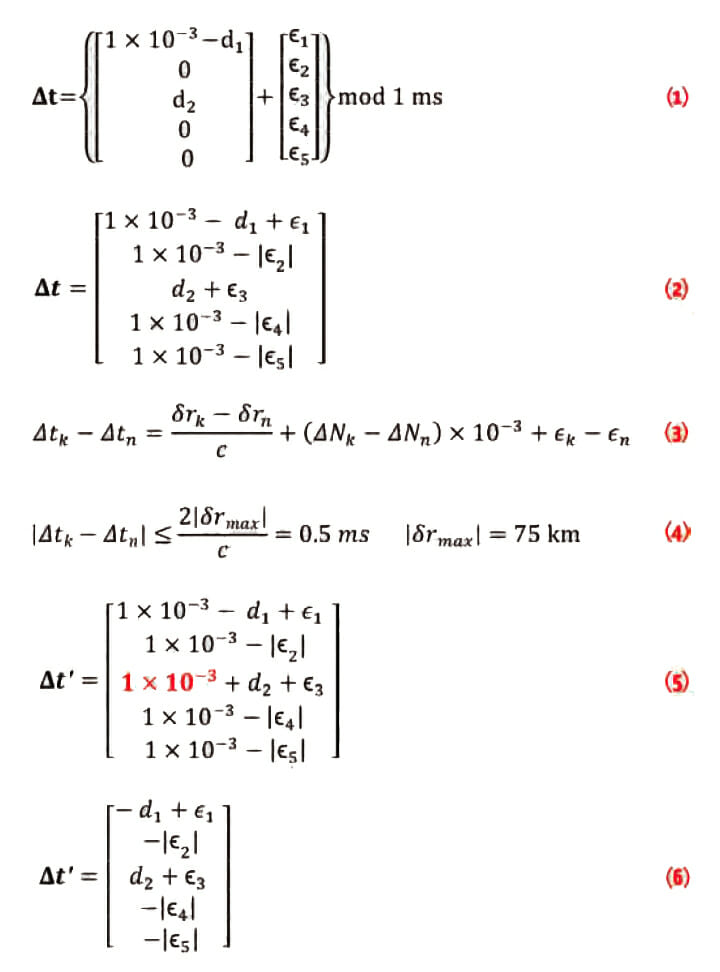 Q: How does a GNSS receiver estimate velocity?

The former approach is the most simple to implement, but it has a meter per second–level of accuracy due to the dependence on pseudorange-based position accuracy. In contrast, Doppler frequency shifts of the received signal produced by user-satellite relative motion enables velocity accuracy of a few centimeters per second.

In several applications, such as high-dynamic mobile navigation, the accuracy of the foregoing methods is insufficient. Improved performance could be achieved by processing differences of consecutive carrier phase measurements (TDCP – time-differenced carrier phase), a strategy that enables velocity accuracies one order of magnitude better than the “raw” Doppler measurements output from the receiver’s tracking loops.

In this article, we review classical velocity estimation techniques implemented for single-frequency receivers, with details on achievable accuracies. We will also discuss TDCP methods along with their associated benefits.

Obtaining Velocity
Equations (1) and (2) (For all equations, see inset photo, above, right), and receiver positions at two epochs (Figure 1). (see image at the top of this article)

If the positions are obtained by single point positioning with meter-level accuracy and the time interval is one second, a velocity of accuracy on the order of a few meters per second is possible.

In applications that need a precise estimation of velocity in real time, different methods have to be considered.

Doppler shift, affecting the frequency of the signal received from a GNSS satellite, is related to the user-satellite relative motion and is useful to study receiver motion. If ƒTi and ƒRi are, respectively, the frequencies of the transmitted and received signal of i-th satellite, the Doppler shift is

Ignoring the effect of satellite clock errors that can be easily compensated, the receiver-generated frequency is biased due to the drift rate, ṫu, of the receiver clock relative to the GNSS system time. This drift rate causes the perceived received frequency to be:

Scaling the Doppler shift in equation (3) by the carrier wavelength and substituting equation (4), we obtain the pseudorange rate observation

Note that this equation depends on the observer position. In fact, this dependence was the basis of the U.S. Navy’s Transit positioning system. However, this positioning approach is negatively influenced by observation geometry compared with the ranging case and, as a result, is not used much in modern GNSS systems except, perhaps, to derive an a priori estimate of position. In the velocity domain, an accurate solution can be obtained using the pseudorange rate equation.

Expanding the dot product in equation (5) and considering that satellite velocities can be computed from the GNSS ephemerides, we can write

Using measurements from at least four simultaneous Doppler measurements, least-squares (LS) or Kalman filter (KF) estimation techniques can be employed to obtain an estimate of the four unknowns.

The design matrix of the Doppler-based velocity model is the same as for the pseudorange case. For this reason the constellation geometry influences the velocity accuracy according to the DOP (dilution of precision).

Of particular importance are the measurement errors, which can be broken down into two parts: systematic errors due to orbital errors, atmosphere, and so forth, and measurement noise. Just as the Doppler is the time derivative of the carrier phase, the systematic Doppler errors are the time derivative of the corresponding carrier phase errors. Fortunately, these systematic errors change slowly in time, typically at the level of millimeters per second. A good paper on this subject by M. Olynik et alia is listed in the Additional Resources section at the end of this article.

Velocity Estimation Using Time-Differenced Carrier-Phase
In the literature, two categories of TDCP methods for velocity estimation have been proposed: instantaneous velocity and precise position change (so-called “delta position”). Both are based on carrier phase measurements, that is, the (accumulated) phase generated by the difference of the incoming (from the satellite) and the local carriers and is able to provide receiver-satellite distance estimation by multiplying with the carrier wavelength λ,

where λ is the wavelength, Φ is the measured carrier phase in cycles, d is the geometric range receiver-satellite, c is the speed of light, δts is the satellite clock bias, δtu is the user clock bias, N is the integer ambiguity; δdeph, δdiono, and δdtrop are the errors due to ephemeris, ionosphere, and troposphere errors, respectively; and the term η includes multipath and receiver noise.

In the first category of TCDP algorithm (instantaneous velocity) the carrier phase measurement is used to estimate the Doppler shift by the equation:

where tj is the epoch of velocity estimation, Δt is measurement data rate, and Φi is the measured carrier phase for the i-th satellite.

Once Di is computed, the pseudorange rate is evaluated so that the measurement model used is the same as described earlier. The benefit of this approach is that the reduced noise of the carrier phase measurements yields less noisy Doppler measurements than using the “raw” Doppler directly. In turn, this generates more accurate velocity estimates. Prerequisites for this method are:

This approach only theoretically provides the receiver instantaneous velocity because the averaged carrier phase rate across two or more sampling intervals yields an average Doppler shift. To deal with this, higher data rates can be used (i.e., reducing Δt), or using more sophisticated Doppler computation algorithms than in equation (8) (e.g., third- or higher-order central differences).

The second category of TDCP algorithm (precise position change) is based on the time-difference of successive carrier phases to the same satellite at small data rates (≤1 hertz) to obtain delta position information. Assuming that no cycle slips occur between two consecutive measurements, the time difference between carrier phases eliminates the integer ambiguities as well as most of the common errors, such as satellite clock bias, ephemeris error, tropospheric error, and ionospheric error which vary slowly with time.

where Δ represents the differencing operation. For example, Δd = d(tj) – d(tj-1) is the change of geometric range between two epochs, and the other terms in (9) are defined accordingly.

The terms cΔδts, Δδdiono, Δδdtrop, Δδdeph are negligible if, before the SD computation, single carrier phase measurement are compensated by applying an atmospheric correction algorithm and satellite clock corrections.

The Δd term of (9) depends on the delta position (Figure 2). (see image at the top of this article)

Summary
Classical velocity determination algorithms based on position difference or Doppler shift measurement are simple to implement but have limitations in terms of the final solution accuracy. Differencing carrier phase measurements at consecutive epochs allows for velocity estimates to obtained with an accuracy of a few millimeters per second.

The downside is that for the TDCP method, the application of a cycle slip detection and repair (or discard) algorithm is critical. As an example, assuming the use of the GPS L1 frequency (whose wavelength is about 19 centimeters), an undetected jump of three cycles, and a one-hertz data rate; an error of about 60 centimeters/second will affect the differenced carrier phase and will be propagated into the estimated velocity.