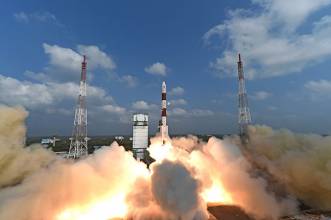 With a strong global economy and evolving ambitions to play a bigger role in space systems and GNSS capabilities, India and the India Space Research Organization (ISRO) have indeed become a bigger player after several technological advances in recent months.

With a strong global economy and evolving ambitions to play a bigger role in space systems and GNSS capabilities, India and the India Space Research Organization (ISRO) have indeed become a bigger player after several technological advances in recent months.

Space-based navigation has emerged as a forerunner in providing position, velocity and timing services with the advent of various GNSS. Satellite-Based Augmentation Systems (SBAS) that improve the quality of service provided by GNSS are expected to replace a significant number of ground-based navigation systems and allow for more efficient use of available airspace. Recognizing the potential benefits of such systems, India took the early initiative and realized its own SBAS called GAGAN — GPS Aided Geo Augmented Navigation — over the Indian region. Inside GNSS published a technical article in 2016 describing the design, development, implementation, testing, and certification of GAGAN.

The European Global Navigation Satellite Systems Agency (GSA) this year has been publishing a series of articles that highlight the important work being done across the Asian region, providing European businesses with an inside look at GNSS market opportunities in India, China, Taiwan, Korea, Japan and South East Asia.

In one such article, titled, “India: A high-tech partner for European GNSS”, the GSA looks at the opportunities for European companies within India’s Smart Cities Mission.

Below are excerpts from the article, which focuses on the Smart Cities Mission for Urban Development.

Launched in 2015 by the Indian government, the Smart Cities Mission for Urban Development aims to transform 100 Indian cities into sustainable, safe and citizen-friendly environments. With a budget of $15 billion, GNSS applications will play a pivotal role in realizing this vision, providing solutions for improving energy efficiency, waste management and urban mobility.

GNSS in India
As home to the world’s 10th largest economy, India has long-term ambitions to develop its capacity as a GNSS provider. Led by ISRO, the entity responsible for the country’s GNSS activities and systems, India currently has two national systems:
1. Indian Regional Navigational Satellite System (IRNSS): an autonomous regional satellite navigation system being developed by ISRO and under the control of the Indian government.
2. GPS Aided GEO Augmented Navigation (GAGAN): an initiative working to establish a satellite-based augmentation system (SBAS) over India. This is a joint program between the Airports Authority of India and ISRO. The system is already operational.

Even with these systems, India may yet lack the applications and interest that one sees in, for example, Europe with EGNOS (the European Geostationary Navigation Overlay Service). “In India, we simply don’t have this level of awareness or the applications, in fact hardly any applications exist,” says Indian Industrial Relations Association (IIRA) Managing Director Varadarajan Krish. “This is where the opportunities for European companies are.”

According to Krish, GNSS will play a major role in realizing these goals. “GNSS.asia has already created awareness about the technologies and best practice models available in Europe so that these smart cities can plug into them as and when the need arises,” he says. The GSA-funded GNSS.asia project is dedicated to developing and implementing GNSS industrial cooperation between European and Asia-Pacific GNSS industries, with a focus on the downstream market.

One component of these smart cities that is of particular interest to European companies is rail. With the Indian government having authorized direct foreign investment in India’s railways in 2013, there is now a unique chance for European rail companies to leverage their one-of-a-kind know-how. In fact, thanks in large part to the efforts of GNSS.asia, companies like Thales, GMV, Telit, ABB and Siemens have already succeeded in executing projects in India.

An Ideal Partner
What companies like Thales and GMV, among others, are finding out is that with India’s strong technology background, it makes for an ideal partner. “Whereas European companies can bring the experience and GNSS know-how, India can meet them halfway with the technology that is needed to power these applications,” says Krish.

To facilitate this partnership, Krish and the GNSS.asia India team bring delegates from European Union (EU) companies to New Delhi for organizational meetings. As one of the main challenges facing EU companies looking to get a foothold in India is the complexity of working with the Indian government, GNSS.asia–India helps guide them through the necessary steps.

“Thanks to the relationships we have with many government agencies, GNSS.asia was recently able to help several large European companies fix meetings with the national Railway Board,” says Krish. “As a result of this work, they have since successfully landed contracts and projects.”

But it’s not only large multinationals that are benefiting — any European company can take advantage of GNSS.asia’s services in India, according to GSA. “Big or small, every EU GNSS company should consider investing in India as there are many opportunities for GNSS, both in infrastructure under the Digital India campaign and in manufacturing under the Make it in India initiative,” says Krish.

More on the GNSS.asia Project
The GNSS.asia project, financed under the EU 7th Framework Programme for Research and Technological Development, has the objective to develop and implement GNSS industrial cooperation activities between the EU and Asia-Pacific focusing on the downstream sector (applications and receivers).
India has maintained a strong economic growth during last few years (+7%), and today is one of the most attractive destinations for business and investment opportunity.

There are several reasons why India is considered a GNSS hotspot:
• The country has an internet user base of about 243.2 million as of January 2014, according to the GSA, and is adding around 6 million new entrants every month.
• There’s a substantial information technology sector in India with Indian companies serving the world with software engineering, geo data processing, etc.
• “Make In India” campaign to boost technological collaboration, driving more investments to India.
• Indian industry has the capability to produce multi-GNSS receivers (e.g., GPS/Galileo/GLONASS/GAGAN).
• Several software companies are engaged in software development for embedded systems and its certification (domestic and export, mainly United States).
• The market for vehicle navigation systems shows steady growth and the Indian auto industry is one of the largest in the world. The industry accounts for 22 percent of the country’s manufacturing gross domestic product.
• Management of civic amenities spatial (GIS-based) capture of existing assets with their location, status and other information.
• About 70% of India’s e-commerce market is travel related. According to Google India, there were 35 million online shoppers in India in the first quarter of 2014, with the number expected to top 100 million mark by end of 2016.

The GNSS.asia platform aims to stimulate the creation of industrial partnerships through a series of activities, including workshops, industry seminars, thematic events and round tables.

For more on IRNSS developments, read “L5 RTK Over India:
IRNSS and GPS.”