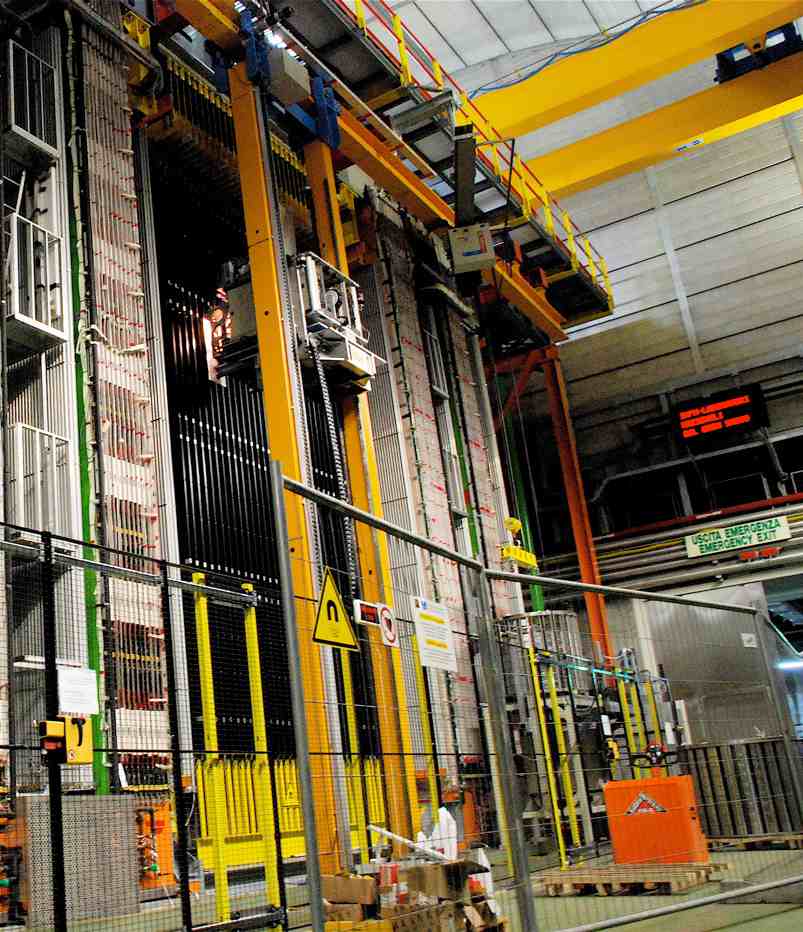 At issue is the so-called OPERA (Oscillation Project with Emulsion-tRacking Apparatus) experiment, inaugurated in 2006 with the main goal of studying the rare transformation (oscillation) of muon neutrinos into tau neutrinos.

At issue is the so-called OPERA (Oscillation Project with Emulsion-tRacking Apparatus) experiment, inaugurated in 2006 with the main goal of studying the rare transformation (oscillation) of muon neutrinos into tau neutrinos.

A recently published paper by OPERA researchers reporting on test results seem to indicate that neutrinos can travel at a velocity 20 parts per million greater than the speed of light — the speed accepted as the absolute speed limit ever since Einstein formulated his special relativity theory. Among the equipment used to test the neutrinos time of flight were PolaRx2eTR GPS timing receivers, manufactured by Septentrio Navigation in Leuven, Belgium.

The OPERA result was based on the observation of more than 15,000 neutrino events measured at Gran Sasso. Neutrinos are subatomic particles. In OPERA, they begin as a series of protons fired from the CERN SPS accelerator and neutrinos emerge en route to the Italian facility.

PolaRx2eTR receivers at both CERN and LNGS compare their local clock to the clocks of the GNSS satellites commonly visible from both sites simultaneously, using a common-view time transfer technique. With the aid of atomic clocks incorporated into the system design, this allowed researchers to synchronize the time at both laboratories to an accuracy of a couple of nanoseconds, the level needed to measure precisely the neutrino transit times.
GPS receivers had previously been used to measure the CERN/LNGS baseline to within 20 centimeters of uncertainty. According to CERN, the neutrinos’ time of flight was determined with an accuracy of less than 10 nanoseconds. The time response of all elements of the CNGS beam line and of the OPERA detector has also been measured with great precision.

Nonetheless, CERN officials themselves point out, the OPERA measurement is “at odds with well-established laws of nature, though science frequently progresses by overthrowing the established paradigms. For this reason, many searches have been made for deviations from Einstein’s theory of relativity, so far not finding any such evidence. The strong constraints arising from these observations makes an interpretation of the OPERA measurement in terms of modification of Einstein’s theory unlikely, and give further strong reason to seek new independent measurements.”
CERN set up an Internet server to receive comments on the OPERA results. Since September, more than 80 scientific papers about the finding have been posted to the server, most of them providing theoretical explanations for the results, with an undetected systemic error most commonly mentioned.

“When an experiment finds an apparently unbelievable result and can find no artefact of the measurement to account for it, it’s normal procedure to invite broader scrutiny, and this is exactly what the OPERA collaboration is doing, it’s good scientific practice,” said CERN Research Director Sergio Bertolucci.
“If this measurement is confirmed, it might change our view of physics, but we need to be sure that there are no other, more mundane, explanations. That will require independent measurements.”

In late October, CERN began setting up a different experiment protocol. Rather than firing the protons in a long pulse lasting 10 microseconds, which made it difficult to determine the travel time of individual protons, they will be sent in a series of short bursts lasting just one or two nanoseconds with a large gap (roughly 500 nanoseconds) between each burst.
GPS timing will continue its role in the new experiments.

Standard GNSS receivers can determine time with an accuracy of between 100s of nanoseconds to a few microseconds. However, according to Septentrio, the company’s PolaRx2eTR receivers run special algorithms that reduce errors even further. Moreover, specialized circuitry in the receivers allows measurement of the time offset between a local atomic clock and each of the individual GNSS satellite atomic clocks.

“We are extremely proud that Septentrio technology has played a crucial role in such historic experiments,” said Peter Grognard, managing director of Septentrio. “GPS technology would not be possible without the application of Einstein’s theories in various ways. It is remarkable to experience that this same technology has now been used to test and challenge these fundamental physical principles.”