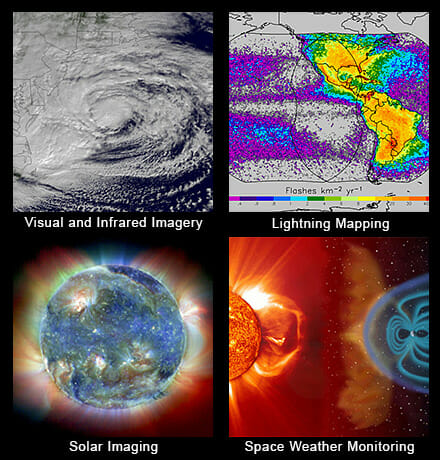 As the first in the next generation of U.S. weather satellites, GOES-R will produce images of weather patterns and severe storms as frequently as every 30 seconds, with improved timeliness and accuracy as a result of onboard GPS receivers optimized for high-altitude space missions.

A feature article in the forthcoming November/December issue of Inside GNSS describes how improved positioning, navigation, and timing (PNT) provided by advanced GNSS receivers is transforming the effectiveness of space missions at altitudes even higher than the orbits of the navigation satellites themselves.

ULA’s Atlas and Delta vehicles have successfully launched every operational GOES satellite, beginning with the launch of GOES-A in 1975, according to Laura Maginnis, ULA vice president of Custom Services.

In about two weeks, once GOES-R is situated in orbit 22,300 miles above Earth, it will be known as GOES-16. Within a year, after undergoing a checkout and validation of its six instruments, the new satellite will become operational.

In comparison, GPS satellites operate at about 12,550 miles altitude. At these higher altitudes, the “spillover” energy radiating over the limb of the Earth has come to define the utility and access of GPS. As the authors of the Inside GNSS article explain, this more challenging signal processing environment has been designated as the GPS Space Service Volume (SSV), defined as the region of space between 3,000 kilometers and GEO altitudes of about 36,000 kilometers.

“The next generation of weather satellites is finally here. GOES-R is one of the most sophisticated Earth-observing platforms ever devised,” said NOAA Administrator Kathryn Sullivan. “GOES-R’s instruments will be capable of scanning the planet five times faster and with four times more resolution than any other satellite in our fleet. With these new instruments and powerful new capabilities, GOES-R will strengthen NOAA’s ability to issue life-saving forecasts and warnings and make the United States an even stronger, more resilient Weather-Ready Nation.”

GOES-R will scan the skies five times faster than today’s GOES spacecraft, with four times greater image resolution and three times the spectral channels. It will provide high-resolution, rapid-refresh satellite imagery as often as every 30 seconds, allowing for a more detailed look at a storm to determine whether it is growing or decaying.

The feature article is authored by James J. Miller, deputy director of the Policy & Strategic Communications Division with the Space Communications and Navigation Program at NASA Headquarters, along with NASA colleagues and key technical experts supporting the development of high-altitude space navigation.

“GOES-R illustrates the class of applications in which navigation performance must be maintained during, and subsequent to, propulsive maneuvers,” they write. “On the legacy GOES satellites without GPS, station-keeping maneuvers mandated relaxing requirements for up to six hours post-maneuver, directly affecting the geolocation accuracy for tracking time-critical events such as tornadoes, flash floods, and forest fires.”

“By effectively tracking the aggregate GPS signals already radiating over the Earth’s limb, signal availability is vastly improved, leading directly to precise rapid recovery from station-keeping maneuvers to accelerated data collection and processing during potential disaster scenarios. Without GPS services in space, such improved products would simply not be available.”

According to Miller and his coauthors, scientists expect that reliable extended forecasting will stretch from three to five days now to five to seven days with GOES-R data, enabled by the nearly continuous availability of GPS at GEO.

Advanced Sensing Technologies
GOES-R is flying six new instruments, including the first operational lightning mapper in geostationary orbit. This new technology will enable scientists to observe lightning, an important indicator of where and when a storm is likely to intensify. Forecasters will use the mapper to hone in on storms that represent the biggest threat. Improved space weather sensors on GOES-R will monitor the sun and relay crucial information to forecasters so they can issue space weather alerts and warnings. Data from GOES-R will result in 34 new, or improved, meteorological, solar and space weather products.

NOAA manages the GOES-R Series Program through an integrated NOAA-NASA office. NASA’s Goddard Space Flight Center oversees the acquisition of the GOES-R series spacecraft and instruments. Lockheed Martin is responsible for the design, creation, and testing of the satellites and for spacecraft processing along with developing the Geostationary Lightning Mapper and Solar Ultraviolet Imager instruments.

“We are ready to receive and process GOES-R data into our forecasts as soon as it is available,” said NOAA National Weather Service Director Louis W. Uccellini. “Forecasters will not only have sharper, more detailed views of evolving weather systems, they will have more data — better data — ingested into our weather models to help us predict the weather tomorrow, this weekend and next week. This is a major advancement for weather forecasting.”

For the aviation sector, GOES-R will deliver clearer views of clouds at different atmospheric levels, generating better estimates of wind speed and direction and improved detection of fog, ice and lightning. This will improve aviation forecasts and flight route planning to avoid hazardous conditions such as turbulence.

Beyond weather forecasting, GOES-R will be part of SARSAT, an international satellite-based search and rescue network. The satellite is carrying a special transponder that can detect distress signals from emergency beacons.