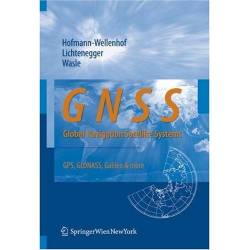 This book is a welcome addition to the GNSS textbook literature by the team of authors who have since 1992 produced five editions of an excellent book on GPS targeting high precision users, Global Positioning System (GPS): Theory and Practice. Hofmann-Wellenhof is also the lead author of the 2003 book, Navigation, and for the second edition of the classic Physical Geodesy (2006).

This book is a welcome addition to the GNSS textbook literature by the team of authors who have since 1992 produced five editions of an excellent book on GPS targeting high precision users, Global Positioning System (GPS): Theory and Practice. Hofmann-Wellenhof is also the lead author of the 2003 book, Navigation, and for the second edition of the classic Physical Geodesy (2006).

In this book, he authors paid particular attention to those factors related to centimeter-level performance, including carrier phase modeling, ambiguity resolution, and differential positioning. These books nicely complemented those written by electrical and communications engineers, who emphasized signal structure and receiver design principles.

Although not explicitly stated in the Foreword or Preface, this 500-page book is the first of a new series of editions dealing with GNSS that follow the general layout of the previous series on GPS.

Approximately 60 percent of the book’s 14 chapters deal with fundamental topics that underpin all GNSS (and regional navigation satellite systems, and satellite based augmentation systems). In fact, the chapter headings and sub-headings are almost identical with the GPS books. This is not a criticism, as the GPS books were popular with students and researchers interested in the geodetic and algorithmic aspects of GPS. Why change a winning formula?

Just as we now acknowledge that we are in a new world, where the acronym “GNSS” is steadily replacing “GPS” everywhere from journals to committees to conferences and magazines, the authors have responded by broadening the range of topics they deal with in this book.

The first eight chapters are devoted to the generic topics referred to above, with separate chapters for the three main GNSSes: GPS, GLONASS, and Galileo. A further chapter describes  “other” GNSS and regional systems, followed by a chapter on applications, and a final wrap up.

The book has a disappointing start, but thankfully it gets better.

Because the structure of the book has “generic” satellite-based positioning chapters at the start, Chapter 1 has to somehow introduce GNSS without overloading it with technical or historical detail (reserved for later chapters).

This introductory chapter is frankly a curious mix of over-generalizations (one and a half pages on “global surveying techniques”), thumb-nail sketches (“history of satellite geodesy” is covered in two pages), and conceptual positioning framework (introduction to positioning, velocity and attitude determination; code vs phase-based, absolute vs. relative, static vs. kinematic, real-time vs. post-processing, surveying vs. navigation).

Chapters 2 and 3 deal with Reference Systems and Satellite Orbits, respectively. These are, of course, fundamental concepts in GNSS.

As a geodesist I fully recognize this and always begin my GNSS courses with several lectures on these geodetic topics — but I am probably in a minority of teachers that devote so much time on the subtleties of terrestrial reference systems and frames, coordinate system transformations, time systems, and orbital motion. Necessarily these chapters are brief and skirt across the complex topics.

Still, in my opinion, insufficient mention is made of plate tectonics, the major complicating factor in terrestrial reference frames, yet several pages are devoted to the transformation between celestial and terrestrial reference frames. The latter subject is irrelevant for GNSS as that complexity is hidden from users by way of clever satellite ephemeris modeling in the broadcast navigation message. It is also curious that the entire Chapter 9 is devoted to Data Transformation.

Chapter 3 goes into considerable detail on orbit description, Keplerian representation, perturbing accelerations, and perturbed satellite motion, and even orbit solutions. A small section even appears on broadcast (GPS case) and precise ephemerides. Here the authors are guilty of “too many equations, not enough numbers.” The equations are not illustrated by worked examples or order of magnitude calculations. It is, in my opinion, an unsatisfactory chapter.

Chapter 4, Satellite Signals, on the other hand, is excellent, with the right balance of depth and breadth of material. The 50 or so pages provide the reader (for example, an undergraduate or graduate student) with fundamental information on the underlying physics of microwave signal propagation, atmospheric effects, signal structures for GNSS, and an adequate introduction to receivers and signal processing. (Note, there is no separate chapter on receiver hardware.) This chapter, together with the following three chapters, justify the purchase of this book.

Chapter 5, Observables, shows the skill and experience of the authors. The material in this chapter was repeated in the earlier GPS books, but that is not a criticism.

Whether Chapter 8, Data Transformation, should be after Data Processing or should be part of Chapter 3, Reference Systems, is a matter of opinion. The “classical” material can be found in any geodesy textbook. There’s nothing new here, and no worked examples. Nevertheless, it is important material that needs to be given some prominence.

Chapters 9, 10, 11 and 12 deal with each GNSS, RNSS (regional navigation satellite systems), and augmentation systems in turn, with the ”Big Three” GNSSes each given their own chapter. The treatment is broad rather than deep, as befits the target audience.

The topics typically include historical background, reference systems, segments, services, signal structure, and outlook. All of this material can be easily found on the Internet from authoritative sources. However, the authors conveniently summarize the basic information. Through regular updated editions they will be able to keep the material current and relevant.

Chapter 13,Applications, deals with user applications and a host of bits and pieces associated with GNSS products and issues (such as data formats). Unfortunately, it contains some glaring omissions. Perhaps one of the most important is high-accuracy applications for which multi-frequency, multi-constellation GNSS is very well suited to machine guidance in the mining, agricultural and construction industries. It is not mentioned.

Nor is enough emphasis given to the global trend of continuously operating reference stations established to support real-time centimeter accuracy positioning for surveying, geodesy and machine guidance applications.

Chapter 14, Conclusion and Outlook, is a rather short “wrap-up” of GNSS that in my opinion fails to celebrate the achievements of GPS, to describe how GPS is fundamentally changing the nature of “geospatial infrastructure,” or to emphasize enough how GNSS promises to transform the geosciences, the geospatial industries and society in general.

How does the book rate overall? It is a good book, but not a great book on GNSS.

It is more than adequate as a textbook for undergraduate and graduate-level courses in satellite-based positioning. But it does have its flaws, and they are not inconsequential. Until a better book on GNSS principles and practice is published, however, this earns my endorsement.