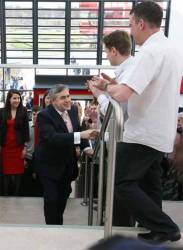 Driven in part by a prestigious Space Innovation and Growth Strategy (Space IGS) report suggesting that the nation has lost both the best industrial work and the ability to influence programs such as Galileo, the United Kingdom will establish a new national space agency on April 1.

Driven in part by a prestigious Space Innovation and Growth Strategy (Space IGS) report suggesting that the nation has lost both the best industrial work and the ability to influence programs such as Galileo, the United Kingdom will establish a new national space agency on April 1.

The British government is placing high hopes on the new space initiative with the UK Space Agency, which will take over responsibility for space-related business, innovation, and skills policy and key government budgets for space.

“The action we’re taking today shows that we’re really serious about space,” said Lord Drayson at the March 23 announcement. “The UK Space Agency will give the sector the muscle it needs to fullfil its ambition. Britain’s space industry has defied the recession. It can grow to £40 billion a year and create 100,000 jobs in 20 years.”

Read the report’s vision of the UK 20 years from now in the Inside GNSS article: The GNSS Contribution to Albion’s Utopia

By the GRACE of Labor

The Government response to the Space Innovation and Growth Strategy (IGS), highlighted the University of Nottingham’s GNSS Research and Applications Centre of Excellence (GRACE) as the preferred GNSS hub for supporting small- and medium-sized enterprises and providing both industrial and academic research. Prime Minister Gordon Brown used the venue of the university’s new Geospatial Building to promise that a re-elected Labor government would help create a million skilled jobs in the United Kingdom.

The Space IGS is a joint government, industry and academia initiative that defines a 20-year vision and strategy for the future growth of the space industry in the United Kingdom.

The IGS process, launched by Lord Drayson in June 2009, was facilitated by the creation of a joint Government, Industry and Academia Space Innovation and Growth Team, comprised of members from across the spectrum of the UK space sector, which produced the final Space IGS report following a on a six-month consultation process

Two of the nation’s leading space companies endorsed the Space IGS initiative and creation of a space agency: EADS Astrium, which is involved in construction of the Galileo in-orbit validataion satellites, and Surrey Satellite Technology Ltd., which is teamed with OH-System to build the first 14 full operational capability Galileo satellites.

Escaping GPS Dependency
The report dwells heavily on the experience of the UK with GNSS programs, particularly the Ministry of Defense’s (MoD’s) reliance on the U.S. Global Positioning System and reluctance to engage fully with the Galileo program.

“The MoD’s stance on Galileo has not facilitated the greatest opportunity for other departments to offer financial support,” the report states at one point. “It is now clear that all users will see the benefits of a more robust navigation constellation with contributions from Europe and other nations above and beyond the US (DoD-financed) GPS constellation.”

The UK has taken a strong position opposing the use of Galileo’s encrypted Public Regulated Service (PRS) and its military forces rely heavily on GPS for providing positioning, navigation, and timing (PNT) capabilities.

In an October 2009 analysis on the UK space policy compared with other space nations prepared by AstroAstute Limited for the Space Innovation and Growth Team, David Leadbeater notes, "France has been an enthusiastic proponent of Galileo, both from military and civil perspectives. As it did not have access to the full capabilities of GPS and wanted to develop similar capability for its own military, search and rescue, security, public and private use, France has sought to gain control of those parts of the procurement that concern development of secure signals and services. MoD has raised the greatest level of objection to French ambitions, but by non participation and zero contribution appears to have achieved little and lost credibility."

Noting many common technologies and an overlap of civilian and military requirements, the Space IGS report suggests that other European nations have exploited these synergies. However, it adds, “In the UK, the MoD has preferences which mean that this is not the case and this has had undesirable consequences, presenting barriers for the UK Space industry. The UK dependency on the U.S. hasn’t changed and for its Space industry the consequential indifference of MoD is most undesirable.”

The nation no longer has the option “to ignore European initiatives that will provide benefits to UK citizens for fear of losing US favor,” the report concludess.

In the executive summary of the report, the Space IGS authors conclude, “By delaying entry to programs and funding in an ad-hoc manner, the UK has lost both the best industrial work and the ability to influence programs to best meet national needs. Examples include Galileo and the Global Monitoring Environment and Security programs. The UK is generally perceived as a follower rather than a leader in Europe on large Space programs.”

More European Engagement
Along with establishing the space agency, setting up the ISIC at Harwell supported by £12 million from the Department for Business, Innovation and Skills (BIS) Strategic Investment Fund, represents a first step in crafting a more pro-active, Europe-friendly space program.

Other actions include developing a National Space Technology Strategy to make sure the space sector delivers its potential, overseen by an industry-led steering group; establishing a senior-level expert panel to take a view of emerging space capabilities to reflect these in future national security and defense planning; and setting up a new Space Leadership Council to provide advice on the implementation of the government response to the IGT.

The UK Space Agency will take over responsibility for BIS policy and key government budgets for space, eventually managing UK interests in European Union (EU) projects including the space component of Global Monitoring for Environment and Security (GMES) and Galileo programs. These are currently the responsibility of Department for Environment, Food, and Rural Affairs and Department for Transport, respectively.

The government has also agreed in principle that the space agency will manage the UK’s financial interest in the EU Satellite Center, which is currently the responsibility of the MoD, and will negotiate on the UK’s behalf in international organizations.

Among the recommendations of the Space IGS is establishment of a government/industry GNSS applications test bed as a focus for the development of services using Galileo GNSS data. “This will help companies develop the new applications and technologies to use Galileo as soon as it becomes operational,” the report states, and “will help UK-based companies develop a ‘first-mover’ advantage from combining initial Galileo data with existing GPS data, rather than waiting until the whole Galileo constellation is available.

The Space IGS 2010 to 2030 concludes with a vision of a GNSS- and space technology–enriched future benefiting the general public, education, and the economy.(see link to "Albion’s Utopia" article, above)