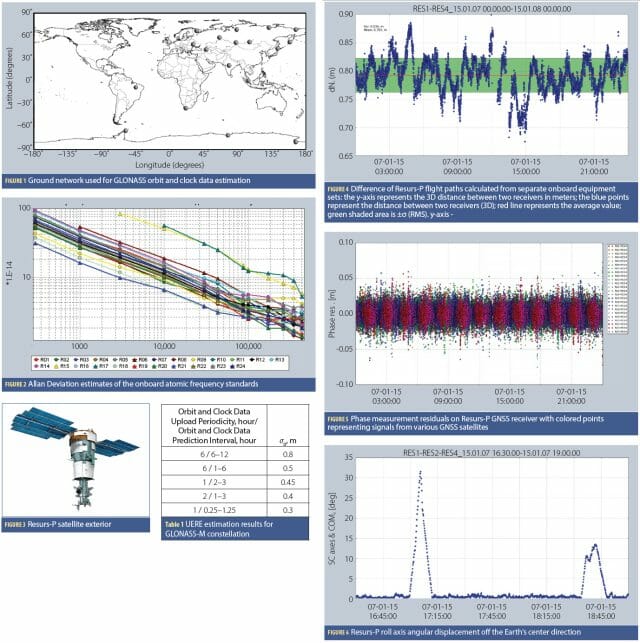 The current stage of GLONASS evolution is aimed at meeting future user requirements of which the most important is the improved accuracy of positioning.

The current stage of GLONASS evolution is aimed at meeting future user requirements of which the most important is the improved accuracy of positioning.

In these circumstances the decision was taken to install L3 code division multiple access (CDMA) navigation payloads onboard the GLONASS-M satellites # 755–761 — only the first of which has been launched. In the meantime, the GLONASS developers’ team conducted analysis and experimental testing of the options to improve performance of the GLONASS services based on the current GLONASS-M satellites transmitting the traditional frequency division multiple access (FDMA) signals.

Analysis of GLONASS Evolution Prospects
As a result of the GLONASS Federal Program in 2002–2011 resulted in the creation of a considerable scientific and technological backlog. Technological solutions for augmenting GLONASS were implemented primarily based on modernized software to enable the improvement of system performance. The most significant of these augmentations is the ground network of reference stations for the System of Differential Correction and Monitoring (SDCM).

A trade-off analysis for GLONASS services development identified the need to create a global ground network to improve the accuracy of orbit and clock prediction when implementing techniques for estimating the combined ephemeris and time parameters using one-way measurements by the ground segment.

Associated efforts initiated in 2007 resulted in deployment of a ground network with 19 reference stations in the Russian Federation and 4 stations abroad for the SCDM, which enable observation of the GLONASS satellites in both hemispheres. The main disadvantage of the network is the lack of overlap for satellite visibility zones from the stations in the Russian territory and the stations abroad. This results in the need to attract additional international stations on the territory of the Indian Ocean to provide for orbit and clock data estimates along the whole satellite track.

Despite these limitations, the prerequisites for improving the current GLONASS performance still exist. That is why the task of estimating the potentially achievable GLONASS performance in terms of accuracy becomes utterly vital. The main issue is identifying the minimum number of reference stations needed and determining the dependence of orbit and clock data errors on the periodicity of their update on board a satellite.

GLONASS Performance Improvement Options
We conducted an experimental study to assess options for improving GLONASS performance. To do this we used the adaptable high-accuracy hardware and software of the Information and Analysis Center (IAC) for Positioning, Navigation and Timing residing in the Central Research Institute of Machine Building of the Russian Federal Space Agency.

Based on International GNSS Service (IGS) weekly estimates, the IAC determined the orbital error of GLONASS satellites to be about 0.02–0.025 meter (RMS). In the technological cycle employed in IAC we also estimate the systematic errors of the reference stations’ receivers. The delay of the IAC final data is seven days.

We selected a 45-day period starting February 2, 2015 for the estimation of of potential GLONASS performance. Figure 1 (see inset photo, above right, for all figures and tables) shows the network of selected SDCM reference stations expanded with several IGS stations. These stations provide a data stream at one-hertz frequency.

We conducted the orbit and clock data estimation using two-day interval measurements with six-hour periodicity. The estimated parameters included the GLONASS satellites ephemerides, the stochastic corrections to satellite and reference station timescale parameters, the troposphere model parameters, the coordinates of the stations, and the Earth rotation parameters.

At the end of each solution the predicted orbit and clock data for a 24-hour interval were generated. It is worth mentioning that the clock corrections were generated using an adaptive model without high-accuracy referencing to the GLONASS time scale.

The equivalent user range error (UERE, disregarding propagation errors and user receiver biases) was estimated against the postprocessed precise orbit and clock data generated by IAC at 15-minute intervals. We estimated UEREs for all satellites in the constellation without limitations.

Figure 2 presents the estimates of Allan deviation for the clocks on all operational satellites in the GLONASS constellation.

The following five optional modes of operation for onboard and ground capabilities were studied when estimating UERE (Table 1):

The obtained results demonstrate that the accuracy of user position solutions can be improved by employing the orbit and clock data determination technique based on the measurements from both the limited ground network and the FDMA navigation signals. The improved orbit determination and clock synchronization accuracy is achieved through the faster calculation of the orbit and clock data and its delivery to users.

GLONASS Use for Precise Orbit Determination of LEO Satellites
For decades before the global navigation satellite systems came into being, the position of any satellite had been determined through a dynamic method incorporating a priori specified models (geopotential, tidal deformations, atmosphere, and so on). Such models were validated along with the satellites orbits, while solution accuracy was estimated based on measurement residuals or laser ranging data. With the advent of GNSS, onboard carrier phase measurements and precise point positioning (PPP) technology in particular have enabled a change in the approach to the solution of the aforementioned tasks.

Such solutions are based on high-accuracy GNSS satellite orbit and clock data, resulting from the sophisticated processing of one-way navigation measurements obtained from global networks of commercial geodetic-grade receivers.

In the 1990s such solutions were carried out only for geodynamic research in analysis centers (such as those located in Pasadena, Ottawa, Bern, Potsdam, and Darmstadt) united by the International GNSS Service (IGS) with its Central Bureau located at the NASA Jet Propulsion Laboratory (JPL). During that period methods and models of processing phase measurements were being improved using a posteriori approaches.

By that time it had already become clear that GNSS phase measurements could potentially enable the determination of user position in real time with significantly better accuracy. High-accuracy GNSS satellite orbit and clock data is the only thing needed to accomplish this. Still, one substantial restriction on carrier phase positioning is the need for a continuity of phase measurements at a relatively high rate providing cycle-slip detection.

Therefore, it seems reasonable that the evolution of GNSS measurement techniques could support orbit determination of low Earth orbiting (LEO) satellites. The position dilution of precision (PDOP) at a LEO altitude of 500 kilometers is almost the same as that at the ground level, while atmospheric influences, the major error source for a ground-level user, are substantially lower.

In order to estimate the accuracy of a LEO satellite position determination based on GLONASS measurements, we chose the 24-hour interval (January 7, 2015) of measurements by a navigation receiver on board the Resurs-P satellite. This Earth remote sensing satellite is the first in a series of three spacecraft designated for updating maps, supporting economic activity of some user groups, as well as collecting data to support environmental monitoring and protection.

Estimation of the Resurs-P flight path error may only be evaluated indirectly using high-accuracy ephemeris and time information based on phase measurements of GLONASS satellites’ signals. The availability of several navigation receiver sets onboard the spacecraft enables us to compare flight paths obtained and processed independently and thus evaluate the accuracy of orbits. Figure 4 shows the difference of flight paths from separate GNSS receivers. Figure 5 provides a typical example of phase measurement residuals.

In order to improve orbit quality all four receivers were processed in one filter together with strong constraint on the distance between each pair of receivers and other parameters. Taking into account that the noise error of residuals for the ionosphere-free combination phase measurements are at the level of 0.01 meter (RMS) and that the flight paths from the various receiver sets, obtained through independent processing, align at 0.05 meter (RMS), we can estimate the 3D final flight path accuracy for combined processing at the level of 0.10 meter (RMS).

The four receiver sets also allow estimation of the satellite’s attitude based on GNSS measurements only. Figure 6 shows the values of the Resurs-P roll axis angular displacement off the Earth’s center direction. Thus, the noise component of the satellite attitude determination is at the level of 10 angular minutes (RMS).

Conclusion
Allowing for the current onboard clock performance of GLONASS-M satellites and augmentations are capable of driving the orbit and clock error down to 0.3 meter in real time. This allows use of GLONASS with existing FDMA signals for high accuracy navigation.