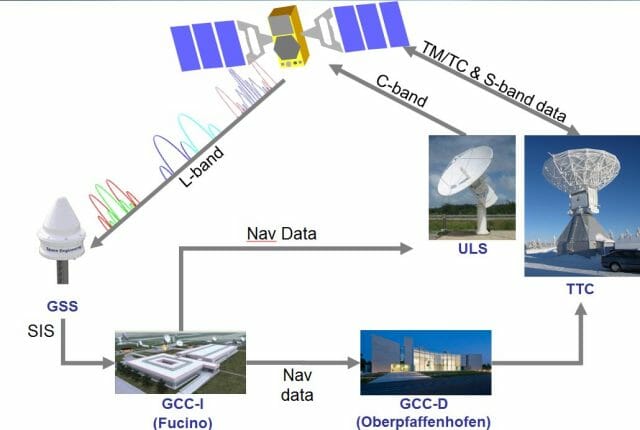 Galileo Sensor Stations (GSSs) pick up Galileo signals in space (SIS) to perform clock synchronisation and orbit measurements which are fed back to the twin Galileo Control Centres to serve as the basis of the navigation message incorporating clock and position corrections and associated integrity data. Uplink Stations (ULSs) then uplink this navigation message to the Galileo satellite navigation payloads for rebroadcast to users. Telemetry, Tracking and Command Stations (TT&Cs) provide the link between the Control Centres and the satellite platforms. ESA figure

Although the Galileo satellites will continue to transmit navigation signals, the generation and uplink of updated navigation messages will be interrupted during the last week of January for about five weeks.

Although the Galileo satellites will continue to transmit navigation signals, the generation and uplink of updated navigation messages will be interrupted during the last week of January for about five weeks.

As a result, the accuracy of the navigation message received by users will slowly degrade or, in case of a reset in the satellite signal generator, the message content will be dummy material, according to ESA. In that case, users will be informed through a warning flag in the disseminated message or through the online Notice Advisory to Galileo Users (NAGUs).

“The main benefits of this migration from V1.2 to V2.0 of the Galileo Ground Mission Segment are better overall performance and availability, increased robustness, and improved operability,” says ESA’s Martin Hollreiser, who is overseeing the mission segment’s development with Thales Alenia Space France as prime contractor.

The upgrades include enhanced operator interfaces, increased access to performance data, automation of routine operational procedures, and the addition of four stations to the ground network.

Various “non-conformances” in the control segment operation identified by operators over time have been corrected in V2.0 along with strengthened security measures, particularly for the Public Regulated Service, or PRS, the encrypted Galileo signal.

The number of Galileo Sensor Stations, where reference receivers monitor navigation message quality, will increase from 12 to 15 worldwide and the number of Galileo Uplink Stations from four to five. The uplink stations operate in the 5 GHz radionavigation satellite (Earth-to-space) band, communicating corrections to the messages and other instructions to the satellites.

The new sensor stations will be on Santa Maria in the Azores, Ascension Island in the mid-Atlantic (on which a GPS monitoring station in also located) and Kiruna in the Swedish Arctic. The additional uplink station will be on Papeete in French Polynesia.

After thorough validation, GMS V2.0 will be handed back to its operators at the beginning of March.

Galileo’s worldwide ground mission segment is one of the most complex developments ever undertaken by ESA, with twin European Galileo Control Centers: a Ground Control Segment in Oberpfaffenhofen, Germany, that performs satellite control and housekeeping, and the Ground Mission Segment center in Fucino, Italy,  that provides the navigation and timing services and related operations.

In order to reach sufficient level of positioning accuracy, the time synchronization of the Galileo system clocks must be kept accurate to a few billionths of a second and any drift in satellite orbits corrected for.

This is the task of the Galileo Ground Mission Segment, which continuously receives signal measurements from the sensor stations around the world. Based on these measurements, it computes exact satellite orbits and time synchronization for the satellites’ onboard atomic clocks. These corrections are incorporated into the satellite orbital positions (ephemerides) included in an updated navigation message, which is uplinked to the satellites for broadcast.

The Galileo mission segment software comprises more than two and a half million lines of code, says Hollreiser.

“The real challenge, compared to other ground segments that ESA has worked on, has been the worldwide deployment and the related real-time aspect, requiring uninterrupted, timely interaction between the various sites,” he adds.

Simpler to Do Now
With only six satellites in orbit and the Galileo system still years away from a fully operational state, controllers can allow such substantial changes in performance temporarily as they implement the upgrades.

The situation is different for fully operational systems such as GPS or Russia’s GLONASS, which have a global user base depending on uninterrupted GNSS operations, often for safety-critical, costly, or sensitive applications. For those systems, control segment failures or interruptions, such as occurred twice last year with GLONASS during upload operations, have much more significant effects; so, implementing system upgrades poses greater challenges.

Some observers have compared accomplishing such improvements without interrupting GNSS service to repairing an automobile engine while driving the car down a road.

In 2007, the Air Force implemented the GPS Architecture Evolution Plan (AEP) and  Launch/Early Orbit, Anomaly, Resolution and Disposal Operations (LADO) capabilities for the Block II satellites, replacing the original, mainframe-based master control station with an entirely new one built on modern IT technologies while switching out hardware at monitor stations and ground antennas. The Legacy Accuracy Improvement Initiative, completed in 2008, expanded the number of GPS monitoring sites in the operational control segment from 6 to 16. Subsequents

AEP v5.2.2 and LADO Release 2 installed in 2008 provided an initial GPS IIF capability and were updated in 2010 with AEP v5.5 and LADO Release 2.8.3 to launch the first GPS IIF space vehicle in May 2010 and to enable Selective Availability/Anti-Spoofing Module (SAASM) capability in U.S. military receivers.

Even more challenging transitions lie ahead for GPS operators in implementing the Next Generation Operational Control System or OCX — a complete replacement of the AEP control system with new software and hardware.

Redundancy is built into the new architecture, as are checks and 24/7 monitoring to ensure that GPS spacecraft receive the correct commands from OCX uplinks. The control signals to the satellites are encrypted and, should anything happen to the Master Control Station, the alternate MCS is ready to replace it immediately, according to Raytheon, which is leading the OCX industry team.

The next time Galileo performs such a system update — from V2.0 to V2.1  planned for September — the intent is also to do so seamlessly, without any interruption of service, Hollreiser says.

“The twin control centers were always designed on a ‘hot backup’ basis, so that in the event of any catastrophic problem, all functionalities could be switched from one to the other seamlessly, strengthening the resilience of Galileo overall,” says Hollreiser.